Based on the novel by Anne Michaels.

Instructions on Living, from the World of the Dead

?I did not witness the most important events in my life. My deepest story must be told by a blind man, from behind a wall, from underground.?

The young Holocaust survivor Jakob Beer sneaks into a room at night to take a closer look at a sleeping Jewish baby, the child of refugees in Greece.

The moment is a poignant one. You ask yourself, Granted the very existence of something so pure and holy as this child, how can a holocaust even be possible? The cruelty and injustice of it flame out and make cinders of spiritual ignorance.

After Nazis kill his parents and abduct his beloved sister Bella, Jakob is discovered in a Polish forest by a kindly Greek archaeologist who brings him back to Greece. The Nazis are there as well, but kindly villagers help Athos feed and shelter the little boy. After the war Athos gets a teaching job in Canada and brings the boy along. 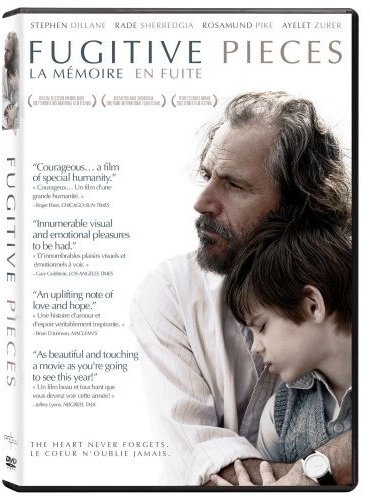 It is significant that Athos is an archaeologist; he bears witness to the sufferings of victims of the Second World War, honours them, and keeps their memories alive. He is the perfect companion for a boy who faces years, even decades, of mourning, of learning how to mourn.

Athos never urges Jakob to forget his pain; he only offers a comforting hug and a kind affirmation: yes, we will honour the memories of these people by affirming their existence and telling their stories. This is a necessary part of healing?acknowledging that the event that destroyed our peace was both real and worthy of lament.

Alex is a prize?blond, sunny, intelligent, fun, and brimming with good intentions. And she is making Jakob miserable. Jakob is still learning how to grieve the loss of his family, and Alex knows only how to rejoice, to transcend sadness, and to leave misery behind.

Jakob is manifesting that conflict experienced by wounded individuals and communities now being told?and yearning to believe?that It’s urgent to move beyond this wound right now, ?to get over it,? as so many insist. This is like telling someone with a severed leg that the solution is simply to get up and start walking.

In an interview about this film, producer Robert Lantos says, ?I am the son of Holocaust survivors and both my parents survived because of the intervention of people who are now referred to as ?The Righteous of the Nations,? Christians who risked their own safety, their own lives, in order to save the lives of strangers. Were it not for that I wouldn’t be here at all. That is the heart of Fugitive Pieces.?

Film tributes to The Righteous Among the Nations are not uncommon (Schindler’s List comes most readily to mind), but few afford the tenderness of the character Athos Roussos, and It’s rare to find such sweetness and strength coexisting in a character the way they do in Rade Sherbedgia’s portrayal.

All of the actors are brilliant, but Stephen Dillane’s performance is spellbinding; his face holds oceans of meaning in its very stillness.

Fugitive Pieces manifests nine of The Mindful Bard’s criteria for films well worth seeing: 1) it is authentic, original, and delightful; 2) it confronts injustice; 3) it renews my enthusiasm for positive social action; 4) it makes me want to be a better artist; 5) it inspires my art; 6) it displays an engagement with and compassionate response to suffering; 7) it inspires an awareness of the sanctity of creation; 8) it is about attainment of the true self; and 9) it poses and admirably responds to questions which have a direct bearing on my view of existence.

REVIEW – MASTERS OF DEATH: The SS-Einsatzgruppen and the Invention of the Holocaust