?. . . lately my friends have been telling me that my songs have gotten more and more opinionated, so I wanted to let you know before we finished this music that while over the course of this music I may share some of my opinions with you I don’t share them with you because I think they’re smart or because I think you need to know them; I share them with you because they rhyme. I did not do this to change your mind about anything?I did this to ease my own mind about everything.?

The above quotation should be part of the Mindful Bard Manifesto, It’s such a sane attitude for artists to adopt.

Creative action should never sink to being propaganda, representing as it does the generous outpouring of a burgeoning soul.

If Tom Waits had grown up in a trailer park in Alabama his music might sound something like this, rich in muggy southern atmosphere, percussive back-alley clankings and thumpings, and extreme tone intervals.

From the opening Buddy Holly chords to the closing acoustic guitar twang, the musical expressions of Todd Snider’s angry, disillusioned, sardonic, white-trash persona are like a balm of Gilead to broken post-Bush spirits, but he never once commits the common singer-songwriter crime of taking himself too seriously.

In his songs Snider portrays the typical God-fearing, ambitious man as a sad, pathetic loser mired in despair, the soldier as a helpless, hapless puppet in a game between psychopaths, and tyrants (both schoolyard and national) as empty shells awaiting the deflation of anyone, big or small, willing to lay down their lives to end the stupidity.

The CD’s crowning achievement, ?Is This Thing Working?,? is an allegory about a school bully who finally gets his comeuppance from a kid willing to take any amount of beating. 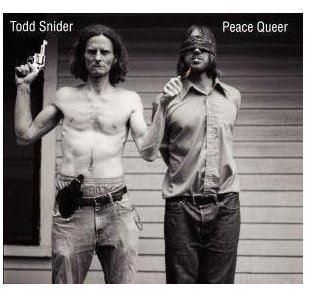 You can’t help but wonder if all this thinly disguised political protest is already outdated, but then those of us familiar with the precise historical conditions that spawned these songs may be a little too blinkered to see that the long road we’re on is just as thick with warmongers and money-grubbers as it was during the Bush era.

?. . . I still have moments when I realize that the bastards are really, truly out and think that maybe, this time, it really is morning in America, but a voice from outside the ether cone keeps whispering that we haven’t changed at all, that we’re as dangerous to ourselves as we’ve ever been . . .?

Snider’s cover of John Fogerty’s ?Fortunate Son? was born of another time and yet sounds as if it issued directly from our recent woes. Snider sings it with a growling intensity that enhances the song’s eerie appropriateness to today’s world.

Snider’s songs are a great antidote to those moments of insanity when you ask yourself why you aren’t trying harder to keep up with the Joneses, or when you stop feeling that knot in your gut when you hear your neighbours rant on about gay marriage and immigration, or when you just need to step back.

Peace Queer manifests four of The Mindful Bard’s criteria for music well worth a listen: 1) it is authentic, original, and delightful; 2) it confronts, rebukes, and mocks existing injustices; 3) it displays an engagement with and compassionate response to suffering; and 4) it stimulates my mind.

Todd Snider’s music was recommended to The Mindful Bard by Thomas Ozere of Ottawa, Ontario.