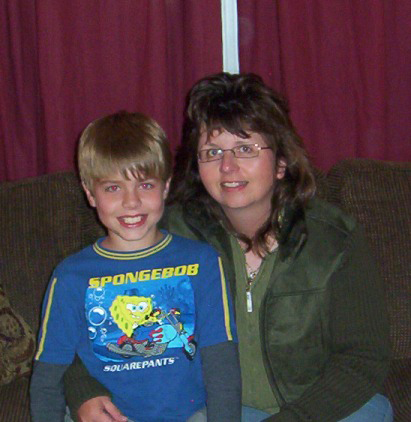 Debbie Hamilton’s life changed when she was widowed at the age of 39. The horticulturist-turned-sociology-major explains what led her to change career fields and return to school after her husband’s death. She also describes why planning is so crucial to her success, and what keeps her going when motivation is hard to come by.

Debbie, her husband, and son, then six years old, moved from British Columbia to central Ontario four years ago to pursue a job opportunity. Shortly after they arrived, however, her husband was diagnosed with cancer, and died just eight months later. Debbie’s initial plan had been to open her own horticulture business, but her husband’s illness and death forced her to reconsider.

?I was [his] primary caregiver for the entire time we were out here, so [there was no] opportunity to get anything started,? she explains. Afterwards, she says, it wasn’t possible: ?With a child it is too hard to go out on your own.?

When she tried to find work in her field, however, she ran up against a wall; her diploma in ornamental horticulture wasn’t sufficient.

?When they asked what degree I had . . . all of a sudden, there was no interest,? she says. ?Doors were . . . being slammed in my face.? She realized she needed a bachelor’s degree to become competitive in the job market, particularly in her small town. ?That degree will open more doors for me,? she explains.

Emotionally, it was also time for a fresh start. ?That was my life with my husband,? she says. ?I can’t go back, so I’m trying to etch out a new life for me and my son.?

Another decision she had to make was a new field of study. Although she still enjoys horticulture, ?It’s very seasonal,? she says. ?I could not get consistent work.?

She began studying sociology, and this past summer began working part-time for a non-profit agency ?that helps people with mental illness and addictions re-integrate back into society,? she says. ?It is very interesting and rewarding work.? Eventually, she hopes to go to teacher’s college, or make a career in social work. A master’s degree is also possible.

Doing it all on her own is no easy task, since her family and friends aren’t local. ?I just do what I can and hope that it is enough,? she says. She also prioritizes. A vital step? ?You learn how to say ?no,?? she says. ?The key is to say it with conviction?that way I can stay on track.?

Planning also helps; in fact, for her, It’s a necessity. ?I really have to keep on top of stuff or I lose my motivation,? she says. ?I’d be lost without my Mom’s Ultimate Family Fridge Calendar!?

Besides having a day-to-day routine that she generally follows, Debbie also uses longer-range planning to keep herself on track. Taking the course study guides as outlines, she writes down her goals for the week, and tries to stay focussed. But She’s a realist, and is the first to acknowledge how easily one can fall behind.

?Some days there is no balance,? Debbie admits. ?I just throw my hands up in the air and go to bed and start fresh the next day.? Perseverance is paying off, though: ?I am almost back on track,? she says.

Although She’s moderately active on AUSU’s discussion boards, Debbie does miss the interpersonal aspect found at traditional schools. ?I am a very social person,? she says. ?I haven’t found anyone out in my neck of the woods who goes to AU.?

For Debbie, though, the bigger challenge is the difficulty of professor-student interaction. ?I miss [that] most,? she says. ?I miss . . . having real discussions, face to face, about topics covered in the readings.?

She also misses lectures: ?Some teachers bring more information to the table than just what is in the text,? she points out. In addition to providing feedback on the material, it would also give her an outlet for ?intelligent conversation,? something she feels is especially important as a mature student studying on her own.

To help with the isolation, she makes a point of communicating with her tutors, a resource that many students don’t fully use. ?They have good tips and sometimes tell you what needs to be focused on,? Debbie says. ?So far . . . I have had really good tutors . . . they have been very supportive.?

The goal of completing her degree motivates Debbie when it gets difficult.

Her most important motivator, though, is her son. ?It is not just for me [that] I’m doing this,? she says. ?I want to be able to really provide for him.?

Plus, there’s another aspect: accountability. ?He lets me know if I’m slacking off!? she jokes.

Currently, She’s in her third year of the degree, and hopes to finish within two or three years. And regardless of the difficulties daily studies may bring her, Debbie’s convinced she made the right decision.

?You can go back to school at any age,? she says. ?I know this is the place I should be!?