Columns
The Voice
The Mindful Bard – Jonathan Byrd, The Law and the Lonesome

CD: Jonathan Byrd, The Law and the Lonesome

?It’s good to see you, Eddie, I just got the word

Nobody knows but this black and twisted bird

May the river run dry if I lie”

Corin Raymond, Edward Hillier, and Jonathan Byrd, from ?May the River Run Dry,? The Law and the Lonesome

When I started digging into the folk music traditions of my province I discovered to my surprise that the historical influences and resulting songs sung in Nova Scotia were almost identical to those sung in the Appalachian mountains of my grandma’s folks. Which raised the question: were we a cultural adjunct of the United States or were they a cultural adjunct of us? Or are we both, in the end, all of a piece?

Today music historians point to the influence of Manitoba’s Métis as well as to Quebec fiddlers and Maritime Celtic and Acadian songsters when discussing the development of pre-twentieth century North American folk music.

A Canadian connection with an album by a southern songster may seem incongruous, but it shouldn’t. For one thing, for years Canadian songwriters have been skipping back and forth across the border, simultaneously inspiring and absorbing American roots music.

And not just the generation that spawned Joni Mitchell, Neil Young, Robbie Robertson, Ian Tyson, and Gordon Lightfoot; from pre-European Indian tribes to early pioneers, the development of musical genres in the United States was paralleled and fed by Canadian musicians to such a degree that it would be misguided to refer to Byrd’s chosen tradition?referred to variously as old-time, old tymey, and mountain music?as solely an American genre.

The fact that The Law and the Lonesome was originally recorded in Toronto with the input of Canadian musicians and writers befits an album drawing not on the illusions that are borders but rather on the reality of prairies, mountains, and deserts?and the restless souls that populate them?that recognize no boundaries but sky and water. 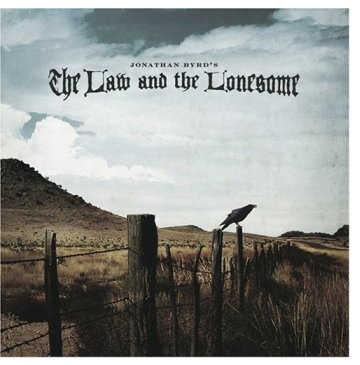 Once again we have an American singer-songwriter inspired by Cormac McCarthy. By Byrd’s admission this album is in a sense the soundtrack he and his musical collaborators imagined the book and movie No Country for Old Men ought to have had. (Now try reading the novel while listening to this album.) He’s in good company; a host of prominent culture makers including Sam Baker, David Byrne, and Jim White have drawn creative energy from McCarthy’s novels.

The first song of Jonathan Byrd’s that I ever heard, and the one that caused me to seek him out, was ?The Cocaine Kid,? a fast-talking, Dylanesque, and ultimately uncharacteristic ramble that showcased Byrd’s razor wit as well as the breadth of his cultural awareness. Jonathan’s typical songwriting style turned out to be much more contemplative, evoking that saddle-and-sagebrush mood you get when listening to old Peter La Farge records or watching Clint Eastwood’s Man-With-No-Name movies.

Byrd’s mellow, sympathetic voice gives depth and credibility to these meditations on the loneliness of lovers, losers, ramblers, addicts, and missed turns. These experiences are universal, yes, but the experience of them is never the same anywhere but on the grounds where millennia of Indians and centuries of pioneers and cowboys, and now decades of hippies, have trod, worked, dreamed, loved, overdosed, and died, and Byrd brings this history alive in his subjects, which include a Cherokee waitress, a criminal on the lam, the trickster Coyote, and even a Poe-esque crow.

The instrument tracks are minimal and contain only what is artistically necessary. This spare quality amplifies the sense of aloneness in big spaces brought on by these songs and highlights some amazing musicianship. These songs are keepers, the kind you play over and over to nurse a broken heart or convince yourself that life has meaning even if your current situation falls short of your dreams.

The Law and the Lonesome manifests five of The Mindful Bard’s criteria for music well worth a listen: 1) it is authentic, original, and delightful; 2) it displays an engagement with and compassionate response to suffering; 3) it inspires an awareness of the sanctity of creation; 4) it is about attainment of the true self; and 5) it provides respite from a sick and cruel world, a respite enabling me to renew myself for a return to mindful artistic endeavour.