Articles
The Voice
In Conversation With . . . Adam Boyle of Left of Zero

Left of Zero is a Toronto-based progressive rock band consisting of Jade Lamarche, Luis Figueroa, Derek Edwards, and Adam Boyle. Their music is avant-garde and polyrhythmic, their performances bursting with energy and good chemistry.

The band released their debut album in 2008 and have just released an EP titled Blame the Gun.

The following are notes from a conversation between the band’s drummer, Adam Boyle, and Wanda Waterman St. Louis.

We have a rehearsal space that we rent from The Rehearsal Factory, which is a pretty popular local business; they have three 30-room buildings in the city. If you walk down a hall in one of these buildings you’ll hear anything and everything at the same time.

We jam twice a week and practices involve a fair amount of beer. When we’re getting ready for shows we try to keep it pretty straight to focus on the material but during rehearsals beer loosens us up and helps us come up with some good ideas. The challenge is to remember those good ideas the following week.

We get along really well and That’s a huge bonus. I’ve been in lots of bands and this is a really fun one to be in for me. I’ve really grown musically with them. In bands in general you don’t want to be the weak link, the one That’s holding the others back.

On the first couple of practices I was extremely intimidated. I thought, ?Man I hope I can figure this out because I really like these people.? So it forced me to step up. Now I feel like we’re all on an equal playing field.

A Network of Resources

My background in technical theatre helps with our live performances; we can always have great lights, great sound. we’re doing a video soon. The company I work for, Midnite Hour Productions, does lighting and sound for all kinds of people. Luis is also a lighting technician with the company. If we ever make it big we’ll have access to good gear. Derek’s good with graphic design so he does flyers and posters for us. And we all have hookups. 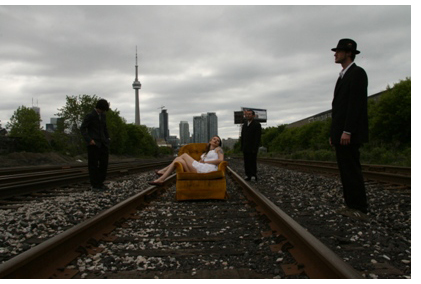 This past year the Radiohead In Rainbows album has been a huge inspiration. I think That’s true for the whole band. We all fell in love with that album. When I first heard In Rainbows I hated it but now It’s one of my favourite albums. It’s really complex, with lots of good rhythms. Lately I’ve also been listening to Air, Arcade Fire, and The Beta Band.

Casting Bread on the Waters

One thing I started supporting with the band was a local group called IndieCredit, which is part of a bigger group called Kiva. It’s a lending tree where I can donate money and choose where I want my money to go. For instance, if there’s a lady in Africa who’s trying to start a store and she needs $2,000 for supplies our group lends a portion of that money. Later it gets repaid to us so we can put it into other projects. Also, on April 11 we’re doing a benefit concert for cancer research.

(Recently a brief conflict ensued when a band in Michigan with the same name tried?unsuccessfully?to legally force the Toronto group to change its name.)

When we chose our band name we assembled it from random lists of words. We just wanted it to capture a bit of what we were about. We always have a hard time answering the question: ?What does your band sound like?? We’ve never had anyone pinpoint our sound yet, and the name reflects that. We just thought it was a really cool name.

We found out that there was a band in Detroit with that name but if you go on MySpace you’ll find tons of bands with the same names.

They sent us an initial message saying it was their name and we just ignored them. So they sent us a cease-and-desist letter and threatened us with legal action. The whole thing was poorly written and they really left themselves open to a counterattack but we just let it go. I told them that if they wanted to spend the time and the money they should go right ahead.

I said, ?Look, if we ever play Detroit we’ll be Left of Zero X?don’t worry about it.? (Like Bush and Bush X.) We never heard back from them. Online they called us ?Canadian douche bags.? I think now if you search ?Left of Zero? online most of the sites will be about us.

This year we’re pretty proud of the product we have. Hopefully we’re going to record something new at the end of August or early September. Every time we write a new song I say, ?We have to record this. This is better than what we’ve already recorded.?

The band grows with new music. Instead of waiting to have a full album I think I’m just going to do the three- or four-song EPs and just keep fresh music in people’s hands as often as I can.

In Conversation With . . . Rah Rah