Features
The Voice
Pages – Mirage: Napoleon’s Scientists and the – Unveiling of Egypt 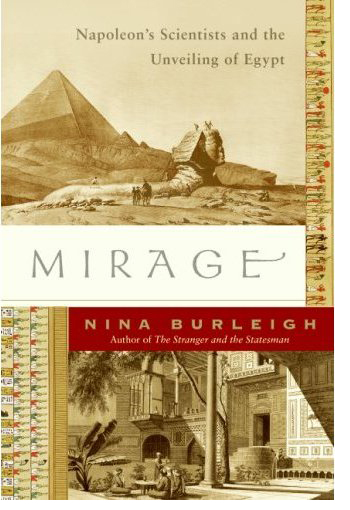 In Mirage: Napoleon’s Scientists and the Unveiling of Egypt, New York-based journalist Nina Burleigh recounts the invasion of a Muslim nation by a Western military force, giving the reader a sense of déjà vu.

It seems so familiar: the story of Napoleon Bonaparte’s incursion into Egypt bears at least a few striking parallels with George W. Bush’s disastrous invasion of Iraq.

In each case, the ostensible justification for the invasion was pure fiction. The Bush administration’s 2003 invasion of Iraq sprang from the ?War on Terror? declared immediately following the terrorist attacks of September 11, 2001, but had morphed into a hunt for Iraq’s alleged ?Weapons of Mass Destruction.?

Having found no evidence to link Iraq with international terrorism, or any sign of the elusive WMDs, the invasion was finally repackaged as ?regime change.? What, then, was the real objective? As Canadian journalist Linda McQuaig wrote, It’s the Crude, Dude; the real impetus for the war was control of the region’s oil reserves.

Similarly, France, according to Burleigh, claimed that its incursion into Egypt would deliver ?French-style culture and democracy to Arabs ruled by non-Arab tyrants.? As with the US’s war in Iraq, the real objective had little to do with democratic ideals. The 1798 invasion of Egypt was in fact intended to give France control over trade, resources, and territory.

Furthermore, in the US invasion of Iraq, as with France’s invasion of Egypt, the foreign military presence was highly unpopular among the very people the Westerners claimed to be liberating.

As philosopher George Santayana warned, ?Those who cannot remember the past are condemned to repeat it.?

There is, however, one important difference between these two ill-fated offensives: the intellectual climate within each of the aggressor nations. The modern would-be conqueror, former US President George W. Bush, was famously ?incurious.?

He drew much of his support from the anti-intellectual religious fundamentalist movement that accepts the Biblical description of creation as science, while dismissing global warming?in spite of overwhelming evidence?as groundless speculation.

In stark contrast, Revolutionary France?after the Terror?encouraged discovery and enquiry. Napoleon’s invasion force included 151 carefully selected savants with specialties ranging from natural science to musicology. These scholars would measure and sketch Egyptian ruins, study Islam and the Arabic language, dissect mummies and the Nile’s aquatic animals, advance the nascent fields of biology and archaeology, and produce La Description de l?Égypte (The Description of Egypt), a 23-volume encyclopaedia of their observations of what Europeans thought of as an exotic and mysterious land.

In Mirage, then, Burleigh interweaves two remarkable and engagingly written stories; a disastrous invasion of a foreign land and alien culture, and a visionary scientific expedition that helped develop a wide range of human enquiry.

That the French expedition was disastrously ill-equipped for this undertaking is a recurrent theme throughout Burleigh’s book. Aside from the lack of drinking water, they were unprepared for the heat, tropical diseases, and war with the combined forces of England and the Ottoman Empire.

Dysentery, insects, sandstorms, blinding eye infections, and armed insurgents were additional sources of hardship. Bubonic plague would also stalk the French during their time in Egypt.

In spite of these adversities, Napoleon then led an unsuccessful attempt to invade Syria, and during the withdrawal had his wounded soldiers euthanized with opium. After returning to Cairo, and with his soldiers nearing mutiny, Napoleon cowardly slipped away, boarded a French ship under cover of darkness, and returned to France. 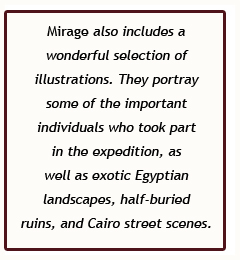 Most of the scholars finally returned to France two years later, in the fall of 1801, after the French were forced to relinquish control of Cairo and Alexandria, and admit defeat. ?Of the 151 French civilians who had arrived in Egypt in 1798,? writes Burleigh ?twelve left before surrender, twenty-six died in Egypt, and five more died shortly after returning to Europe.?

Stunningly, this number does not include the ?several hundred officers? wives and other female camp followers? that Burleigh mentions earlier in her book. Like a mirage, they have simply vanished. The fact that the French women who travelled with the expedition are treated by Burleigh as nonentities is a glaring and frankly bizarre oversight.

Burleigh’s examination of the extraordinary scientific expedition, however, and its influence upon numerous fields of study is an impressive work. We learn about many of the prominent scholars who took part in the expedition, and who, in spite of overwhelming adversity, produced groundbreaking theories and opened new areas of study as a result of their time in Egypt. Indiana Jones has nothing on Napoleon’s Egyptian archaeologists.

Mirage also includes a wonderful selection of illustrations. They portray some of the important individuals who took part in the expedition, as well as exotic Egyptian landscapes, half-buried ruins, and Cairo street scenes. The zoological studies, rendered in exquisite detail, are from the hands of the expedition’s naturalists Geoffroy Saint-Hilaire and Marie-Jules-César Lelorgne de Savigny. The images even include a couple of contemporary British cartoons ridiculing the work of the French scientists.

This book is a must-read for anyone with an interest in French or Egyptian history, the history of science, or the history of European-Muslim relations. Nevertheless, it is meant to appeal to a very broad audience.

The account of the French expedition in Egypt, the author tells us, is taught in French and Egyptian schools and studied by Egyptologists, but outside of these realms, it is little known. What a shame. Fortunately for us, Burleigh sheds some light on this fascinating episode in history.

Fly on the Wall—History Electives

Pages – Mirage: Napoleon’s Scientists and the – Unveiling of Egypt