Articles
The Voice
In Conversation With . . . The Spinney Brothers

The Spinney Brothers are an acclaimed bluegrass band from the Annapolis Valley in Nova Scotia, known by bluegrass fans all over North America for their masterful musicianship, tight, rich vocals, and amazing performances.

They’ve just put out their seventh album since 1993, When the Golden Leaves Begin to Fall (reviewed this issue).

Wanda Waterman St. Louis recently caught up with the band at the Digby East Fish and Game Association, where they put on a wonderful Sunday afternoon concert for an enthusiastic crowd. The following are notes from her conversation with banjoist and lead singer Rick Spinney.

Allan was the first one to learn to play guitar. The bunch of us were out in the mountains of British Columbia cutting cedar logs and the only music we had to listen to was bluegrass. I moved back east and Mum bought me a banjo. Allan came back a month later and we started our climb up the bluegrass mountain.

Bluegrass was a part of our growing up as well. Mum was certainly into the old-time country music. Years ago the crossover wasn’t as distinct as it is now. Back then bluegrass and country were both the same thing.

We’ve been fortunate enough to travel across Canada and the southern part of the States, bringing our music to a lot of different places, and I have to say that in the Maritimes, and especially in our home town, we get tremendous support.

We just came away from two sold-out shows, and we’ve been doing these shows for six or seven years now. I can’t see a whole lot of change that I would make in bluegrass music in the Maritimes because there’s still a good flavour of traditional music and there’s lots of festivals.

Every weekend in the summer there’s a bluegrass festival. You get a good mix of the traditional style of music that we play, but there are also a lot of contemporary bands introducing new material. 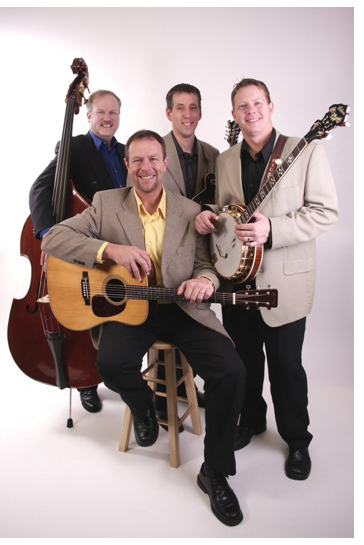 We really look up to musicians like Ray Legere and Frank Doody, who paved the way for us here in the Maritimes. Most musicians that we talk to point back to Lester Flatt and Earl Scruggs, that style of music. There’s something about that style That’s captivating. They were masters of what they did. If you were to set them down in today’s era they would still be as classic as any band could be. If you could only watch some of the old footage of Flatt and Scruggs and the Foggy Mountain Boys when they used to do live shows; It’s amazing to see how they perfected what they did with such ease.

Other than the gospel album we did we’ve pretty much stayed true to the same format, for the simple reason that It’s worked. There’s still a demand for traditional bluegrass music, and we feel It’s important to incorporate original music in the southern bluegrass style to keep a freshness of material.

Some things that we’ve changed in this recording are tones, the tones of the instruments, how we sing, and how we record.

When we recorded the last two CDs we hired Ron Stewart and he plays the fiddle on those as well. We fly him up and rent a studio. Ron has a wealth of knowledge in music. At nine years old he played with Lester Flatt. He’s got the same sense and interest in that older style that we have.

Right now he’s playing with Dan Tyminski who sang in O Brother, Where Art Thou? Ron’s a member of Alison Krauss’s band but Alison Krauss had gone off to do some other things so Ron’s playing banjo now with the Dan Tyminski band.
Ron brings that special quality to our recordings. He brings that American sound, which is hard for us to get.

I wish I could put my finger on the difference between our sound and the American sound; it has to do with tones. You can hear it, It’s just really hard to pinpoint it.

There are elements in Ron’s mixing too that give it that American edge. Nothing against the Maritimes, It’s just that what we do with that southern traditional sound is slightly different and we really wanted that traditional sound.

So far music has been a weekend gig for us. Allan and I farm during the week. It’s hard but it works if you have band members who are really committed. Gary and Terry come down from Halifax once a week and we practice four or five hours that night and then individually during the week. We used to practice two or three times a week, but once you have the right chemistry you don’t have to have such long hours. Plus if we’re on the road we get a lot of practice playing.

In Conversation With . . . Patrick Brealey

Taking Notes: Eye on Education – A Lecture from Big Bird!