Columns
The Voice
The Mindful Bard – The Spinney Brothers, When the Golden Leaves Begin to Fall

CD: The Spinney Brothers, When the Golden Leaves Begin to Fall

Down-Home Southern Bluegrass with a Shot of Fundy Spray

My earliest bluegrass memory was watching Lester Flatt and Earl Scruggs on The Beverly Hillbillies.

I liked their playing, but the sitcom context told me this kind of music was a hick joke on par with Jethro Bodeen’s ?cypherin? an? ?gezintas.? It was part of what we weren’t supposed to be.

I was in university before a friend introduced me to the joys of bluegrass and old tymey music. Hearing the Stanley Brothers transported me to the misty Ozark Mountains of my maternal grandmother; I felt like I’d come home.

A relatively narrow genre (thanks to Bill Monroe), bluegrass music was still remarkably inventive, delightful, and complex. The lyrics were rough but simple, with universal themes that channelled modes of extreme emotion. Anyone who had actually endured such emotions found it hard to scorn them. Why were they so often dismissed as maudlin? 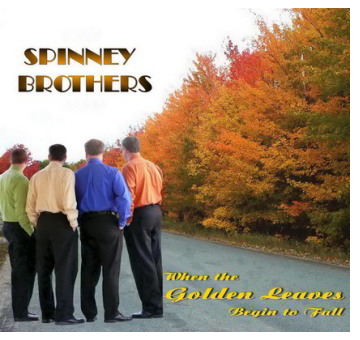 I opened my eyes and realized I had grown up in an area that was not only knee-deep in mountain music fans, but the music was regularly played and celebrated here.

Southwestern Nova Scotians have hungrily consumed bluegrass since the genre’s inception, and bluegrass writers and musicians from the area have been skipping down to Nashville on a regular basis, making many contributions to the canon of standard songs.

As I learned recently at a Sunday concert at the Digby East Fish and Game Association, this Bluenose bluegrass tradition is still vibrantly alive. From the minute The Spinney Brothers launched into their first faultless, lickety-split chords and rousing, pitch-perfect harmonies you couldn’t imagine angels making music any sweeter. I had to have their latest CD.

The only Spinney brothers in The Spinney Brothers are Allan and Rick, who provide the brilliant vocal duets gracing most of the songs. they’re joined by mandolinist Gary Dalrymple and bassist Terry Mumford (who occasionally inserts a deep-as-China baritone).

Ron Stewart from Alison Krauss’s band plays a brilliant fiddle on this CD and provided guidance through the recording process. Studio veterans (this is their seventh CD), the Spinneys still benefited from Stewart’s ear. The tracks are crystal clear and carry that traditional sound while coming across as fresh and new.

Most of these songs are covers of ditties by trad artists, including Ralph Stanley, Flatt and Scruggs, and Dolly Parton.

The hilariously tongue-in-cheek ?Boss of This House? is the rant of a sexist husband whose caustic rhymes will have any modern woman either laughing hysterically or swinging her fists.

Rick Spinney’s song ?I Pray to God? is a heartfelt tribute to a local girl, Karissa Boudreau, who disappeared and was eventually discovered to have been murdered by her own mother. The song echoes the compassionate response of Nova Scotians to an unimaginable crime.

I was moved by the kind way band members treated their fans at the concert. They had been granted a green room in the building but were barely there, choosing to spend the few pre-concert, intermission, and post-concert minutes joyfully signing autographs, chatting, and posing for photos. 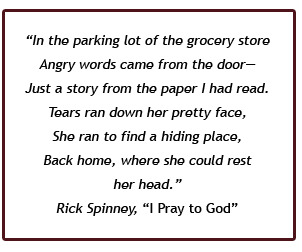 ?We’ve received a lot of support over the years from small communities like this,? says Rick Spinney. ?People who don’t have a lot of money will come out and pay to see our shows and we want to show our appreciation the best that we can. If it wasn’t for the audience we’d be doing this in our kitchens.?

There is a lesson here for artists of all persuasions: work hard, be sincere, humble yourself, and love what you do and who you do it for. All of the existentialist posing in the world won’t make the quality of your work any better than this.

Future plans for the band include continuing performances in the Maritimes, more gigs in the US, and a possible DVD.

When the Golden Leaves Begin to Fall manifests six of The Mindful Bard’s criteria for music well worth a listen: 1) it is authentic, original, and delightful; 2) it confronts existing injustices; 3) it makes me want to be a better artist; 4) it displays an engagement with and compassionate response to suffering; 5) it inspires an awareness of the sanctity of creation; and 6) it provides respite from a sick and cruel world, a respite enabling me to renew myself for a return to mindful artistic endeavour.

In Conversation With . . . Patrick Brealey

In Conversation With . . . The Spinney Brothers