Articles
The Voice
In Conversation With . . . Lawrence Blatt

Lawrence Blatt is a multi-string instrumentalist known for flawless, inventive playing and compositions based on meditations on such things as colour, number, and the laws of physics.

Blatt’s latest album, The Color of Sunshine, was produced by renowned guitarist (and once owner of Windham Hill Records) William Ackerman and recorded in Ackerman’s studio in Brattleboro, Vermont. (Keep an eye on The Voice for an upcoming review of Blatt’s recent work.)

I like schematic albums. I like to base an album on an overall theme of inspiration because I like an album that holds together, not just one song after another that might not be linked in any way. Especially with the latest one, The Color of Sunshine, It’s really important how the album comes together in the light spectrum. The album is actually presented in the order of the light spectrum and there is actually a journey of emotions and thoughts.

On the Composition Process

Sometimes I can sit down and write out a full song in 30 minutes; it just comes out and That’s it. For example, on the new album, ?Green Corn in Spring? and ?Black Rock Beach,? those were both written in one sitting, in about 30 minutes. Others I laboured with for a long time. Writing ?Jaune,? the track for yellow, was quite a long process.

On Fibonacci’s Dream I actually play every instrument on the album: guitar, bass, piano, mandolin, various percussion instruments; also some unusual instruments like the charango, a South American instrument.

I play all the same instruments on The Color of Sunshine but there are additional artists like Steve Schuch on violin. William is actually playing on ?Reach for the Rainbow.? He’s also playing a little on ?The Color of Sunshine.? On that track we also have Jeff Oster on flugelhorn and Derrik Jordan on percussion with me on a couple of tracks. 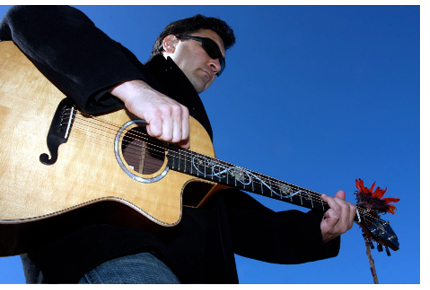 Like most people I started out playing with a pick. I did the singer-songwriter thing for a while. I participated in a week-long workshop a number of years ago that was run by a guy named Laurence Juber. He was the lead guitarist for Wings. I spent about a week working with Laurence and with another performer named Brian Gore and they introduced me to playing without the pick and using just the pads of my fingers.

It takes some time to build up the calluses; the steel strings are really hard on your fingers. It takes a good year to stop tearing up your fingers. I think It’s just such a natural sound, and it allows you to do things you can’t do with picks. There are a number of other players who are starting to employ this method. A Hawaiian ukulele player named Jake Shimabukuro also plays with the pads of his fingers.

I’m a microbiologist and I work at a biotech company here in San Francisco. It’s hard to balance that with an independent music career. When You’re an independent musician you have to spend a lot of time getting your music out there and promoting it, dealing with the production and packaging of the album. If You’re with a record label they do all that for you. On the other hand the ability to have complete creative control over what I’m doing is absolutely essential.

I had self?produced the first two albums, but with those two I felt I was working in too much of a vacuum; I didn’t have anybody to constructively listen to the material before it went out. It was important to find a producer who understood the kind of work I was doing and could maintain the sound that I had and enhance it. I think that was really successfully done with Will. And his engineer Corin Nelson was just fantastic in terms of getting you set up in the studio and working on the mixes. The album was recorded over a two-week period, so it was pretty intense.

On the music side a big inspiration was Paul McCartney and his early albums after leaving the Beatles. Ram was amazing to me because Paul was playing all those instruments and layering it all. That was a huge inspiration for what I do. I was always influenced by the singer-songwriters, especially James Taylor. I really span the gamut in my own music tastes, from country to jazz to rhythm and blues. I just like music That’s done well and the genre doesn’t really matter.

I’m also inspired by people who accomplish things, people who can take nothing and make something. That’s what you do with music?you take an idea and turn it into something.

I’m now working on my fourth album, which is also produced by Will Ackerman. It’s called String Theory. we’re using that as a kind of metaphor uniting events, people, and places, and we’re trying to incorporate a lot of stringed instruments. We are actually working on orchestrating a number of the piece, working with some classical musicians here in the Bay area. 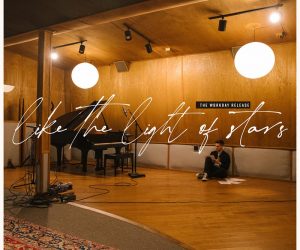 The Mindful Bard – Lawrence Blatt, The Color of Sunshine