Articles
The Voice
In Conversation With . . . Little Foot Long Foot

Little Foot Long Foot is a Toronto-based rock duo comprising vocalist-guitarist Joan Smith and drummer Isaac Klein. On May 26 they released Harsh Words, an album of bluesy, hard-driving songs in classic rock style. The band is currently on a tour of Canadian cities.

The following are notes from a conversation between Wanda Waterman St. Louis and Joan Smith during their Halifax stop.

The Place Where the Songs Come From

?Two Towns Over? is actually about the last time we were out east. We had a show in St. John and we were staying in St. Andrews by-the-Sea. After the show one of the bands said we could crash at their place but we said, ?Nah, we have our own beds in St. Andrews and we’ll just drive home from there.?

They said, ?Well, watch out for the mist,? and so of course there was the thickest fog ever and we’re like, ?Great! We can’t see anything and we could die.? So that song is based entirely on experience.

Also we went to Springhill, Nova Scotia, to play and were staying at a campsite about 45 minutes away and we had a GPS system which suddenly, at three in the morning, decided to give us completely wrong directions. It was pointing down a road that looked like if we went down it we’d end up in Axe Murderer Town. So we made the decision to turn it off.

?Isolation Blues? was written from the point of view of the saddest, most deluded person on earth. I’m not the most depressive person but that song was written as if I were.

I was an only child and a bit of a weirdo. I got my first guitar when I was 14 and I was playing piano and French horn before that. I guess I was a loser. I didn’t have a lot of friends, and when You’re little, friends are like the most important thing. I went through a couple of tough years when I had no friends at all. That’s definitely shaped who I am in terms of trying to be empathetic. That was probably when I was at my most sad. Now I’m a very happy person.

When I want to write a song I sit with my acoustic guitar, which is kind of difficult because I used to do singer-songwriter stuff and It’s so easy for me to fall into those plaintive, Sarah McLaughlin-type, sad little songs, so I try to make them as aggressive as possible on the acoustic guitar and then usually the lyrics come after. 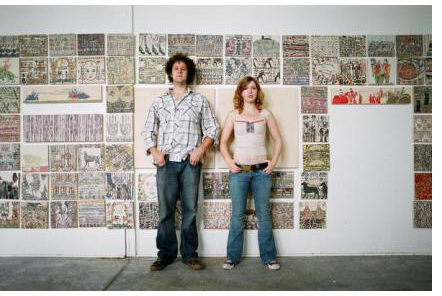 Sometimes the subjects come from conversations Isaac and I have had, like, ?Remember that douche bag who totally thought he was a cowboy but grew up in Suburbia, Toronto, sitting in front of the Nintendo his whole life, pretending he milked cows every day?? And Isaac will say, ?You should write a song about that,? and so I do. And I try to make Isaac laugh with some of the lyrics.

I was never really in love with writing and performing acoustic singer-songwriter material. I didn’t get a super response from it. Then I was out in Vancouver about three years ago with a friend who used to do music with the Manvils. He had this awesome semi-hollow-body guitar made in the late ?60s by Yamaha.

He was like, ?Dude, this would be perfect for you.?

So I said, ?Well, You’re in debt and I have a little bit of money, so I’ll buy this guitar off you.? I plugged it in and an awesome sound came out of it. From then on I got a way better response from listeners. I have a pretty aggressive way of singing and they said it worked for me better than the acoustic guitar.

?Little Foot Long Foot? is from a Dave Chappelle skit. It’s the one where he’s doing Inside the Actor’s Studio and the guy is doing a fake retrospective of his career and one of the movies is a melodrama called Little Foot Long Foot. He has this really little foot and a really long foot and he keeps falling over and saying ?I don’t need any help!? I always thought the title of that movie was brilliant.

What Does It Take?

In order to be creative I generally need a room to myself. I have housemates so that can be difficult. Recently, being creative has also meant getting up in the middle of the night when I think I have a song and recording it into my phone. Actually I did that the other night and when I played it back in the morning it was just me breathing.

I’m a musician and I don’t make a lot of money so nine-to-five jobs, when I do have them, are pretty non-conducive to creativity. I was the executive assistant to Ted Rogers of Rogers Communications. That was really stressful and Little Foot Long Foot did nothing during that time period. I hated my life. Being on tour encourages a lot more creativity because You’re able to do just music.

We like to put humour into things. We love comedians like Dave Chappelle, Mitch Hedberg, and David Cross. they’re brilliant with words.

As for movies, I loved Harold and Maude. That’s my favourite movie ever. I guess It’s an aesthetic.