Articles
The Voice
In Conversation With . . . Conrad Praetzel

Conrad Praetzel is the wizard behind Clothesline Revival, an enterprise devoted to remixing songs from field recordings in a way that revives and exalts the primitive genius of American folk music.

Recently, Conrad took the time to answer Wanda Waterman St. Louis’s questions about some of Clothesline Revival’s past recordings, many of which can now be downloaded for free.

On this song there are a number of atmospheric samples to create a simple drone for the singer. A drone could have worked for the whole song but instead I make an abrupt transition into what’s almost grunge rock. It needed something off the wall like that to match the lyrics. they’re very silly but sung in a very serious way by Almeda Riddle, often called Granny Riddle. It’s odd to think of a granny singing along with a grunge band but I think it really works.

The first tracks to go down were a simple beat track to set the groove and a rhythm guitar track to define the chord changes. All I had was her a cappella vocal to start with so there were a bazillion ways to go with it.

Finding that first link with the vocal source is one of the most rewarding parts of working from these old field recordings. When it does work you feel like you’ve opened a door into some place no one else has been. The rest of the arrangements just sort of fall into place though they usually take some time.

I guess about half of what you hear are real instruments. I also used a second field recording during the instrumental bridge where a different woman describes meeting the political activist Mother Jones when she was a kid.

On ?Little Maggie? the singer is an old friend, Aric Leavitt, and it was his choice to do that song. He introduced me to bluegrass music and Hank Williams when I was a teenager and we used to jam a lot. He’s great on banjo and actually took lessons from Jerry Garcia back before The Dead made it big. Now he lives in Los Angeles and scrapes by making a living busking. You can watch him on YouTube performing at the farmers? market in LA where the group the Ditty Bobs recorded their visit, Live from Chez Ditty, Episode 3. 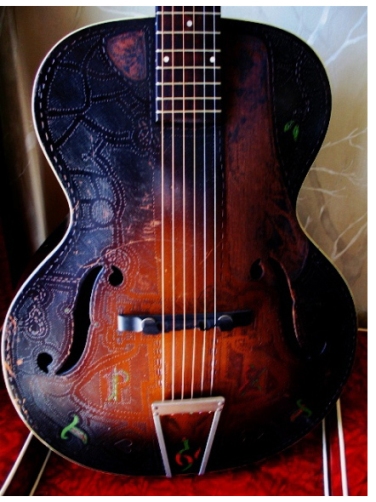 Robert Powell is a major contributor with his guitar parts, particularly lap and pedal steel. I rough the songs out pretty well myself before getting some other folks involved. I use beat samples that I create myself, layered to create the groove and vibe and also usually add a live drummer to ?grease the tracks.? I worked with Brantley Kearns on fiddle on the first Clothesline Revival album. He played on Dwight Yoakam’s early hits.

On that first CD I worked with a couple of local vocalists, Tom Armstrong and Wendy Allen, both amazing. Tom has the classic ?40s/?50s country vocal style down and is a terrific songwriter. Wendy Allen has a sublime voice and also contributed as a background vocalist on the second Clothesline Revival CD.

?Troubled about My Soul?

?Somewhere sittin? in the kingdom, she won’t be troubled no more . . .?

One of the tough things with this song was maintaining the singer’s (Lillie Knox) free metre bar lengths. Every verse is a different length. This song was all about moods, and getting them right. In each verse the mood changes from worry to bliss, not uncommon in many spirituals.

In ?Troubled about My Soul? the guitar is an F60 round-neck dobro I played without a slide. That was the first track, which defined the changes that worked with the a cappella vocal. There is also Robert Powell on pedal steel guitar.

What Have You Been Listening to Lately?

Right now I’m working on my seventh CD. Hope to have it out by early 2010. It will be the third Clothesline Revival CD but this time it will be almost entirely instrumental.

I definitely plan to use the tattooed 1930s Harmony Crest I bought recently [see photo]. It records real well, especially with slide.

?Music Has No End?

?Music is like a grapevine that is never pruned, that each year it put on a little bit more . . .?

That hambone sound at the start is an arpeggio played using a very organic-sounding electronic sample. The guy talking is Neil Morris, a musician and vocalist from Arkansas. He’s the father of the songwriter Jimmy Driftwood, who wrote the Americana classic ?Battle of New Orleans.?

Neil Morris is talking about his feelings about music and remembering a discussion his father had with a friend. I love the sentiment and the open-mindedness in that statement. Music is alive and growing and as an artist I like to strive to add something to that growth.