Articles
The Voice
In Conversation With . . . Spookey Ruben

Spookey Ruben is a recording artist, composer, and filmmaker, a singular talent infamous for having written songs in the style of progressive rock, among other ?70s genres. (See the Voice piece in this issue on his new CD, Mechanical Royalty.)

While touring in Saskatchewan, Spookey took some time to chat with Wanda Waterman St. Louis.

I always felt like Canada was home. I’ve had a passport since I was a little kid. Even when I lived in Germany or the States I felt like as soon as I got back to Canada life would get sorted out.

Gentle Giant, Frank Zappa, early albums by Rush, those really influenced me. I was into current bands as a teenager but I was also into older music. My older brother was a music fanatic so I was always asking about his records.

When I was nine and 10 I was really into any type of pop music. When I was 11 I started taking classical guitar lessons and got more into guitar, which led me to heavy metal. The first album I ever bought was Ghost in the Machine by The Police. I was really into Level 42 and Saga. I was into the very clean-sounding bands that had lots of keyboards and ultra melodic sounds. Getting into the guitar got my interest into bands like Metallica.

You say that a lot of the old prog rock bands got made fun of because they took themselves too seriously; I feel the same way about a lot of these indie bands. It’s like MSTRKRFT; they’re standing on a stage and their fingers are fighting over this iPod and there’s millions of people there watching. I just don’t understand that. I don’t understand how That’s cool. I would be embarrassed if that was my show.

What’s important to me as a musician is making music that I feel is missing in my life. To me music is that one thing That’s not about going through the grind, about having a career. The music is more important to me than having a career as a musician. I also do work as a composer. I’m kind of able to juggle my own music with my work. I guess I’m privileged that way. 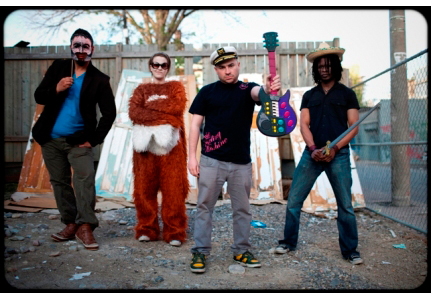 When it comes to Mechanical Royalty it was something I had always wanted to do. I’m staff composer at a company in Los Angeles. After all the composing work I do, when I make my own album it really has to be an album that I want to make. I had always wanted to do some kind of prog rock epic thing, something that you’d talk about for fun in rehearsals. Actually doing it was a whole nuther thing.

Where my music comes from is I’m a pop vocalist but I’m a metal guitar player. It’s a kind of inner conflict. As a vocalist I just want to sing pretty melodies and as a guitarist I want to jar people, give them an uncomfortable feeling.

Spookey Ruben’s Dizzy Playground is a webisode series shown on Exclaim! TV. Every episode is like a short surreal, comedy, fairy-tale kind of film. A kind of musical sitcom. In every episode we have a musical special guest. Instead of me interviewing the guest I get them to play a role in the story. The first show, Omen of the Goblet, was a medieval-themed show. We had Brendan Canning of Broken Social Scene as a knight and I’m like a king sending him on a mission to save O.G. Biggs, this big furry owl.

Eventually TVT Records got hold of my demo tape and I signed a deal with them when I was 22 years old. Then I had a series of bad experiences with record labels and got almost overwhelmed by life as a composer, which brought me to Mechanical Royalty.

To be creative I need to be unsatisfied. It sounds kind of depressing, but I’m never done saying what I want to say. Every time I make an album I try to clarify my point of view.

Right now I’m finishing up an eight-minute piece on Ernest Shackleton, a South Pole explorer. Sometimes I see a kind of parallel between doing that and going on tour and being a band leader and trying to keep everyone happy. It’s like this crazy adventure.

The Origin of a Beautiful Species

If I had to put a label on it I’d have to say I’m a Darwinist. I’m proud of the fact that I’m a member of the animal kingdom. At one point I was a sperm cell and I made it to my mother’s egg, competing with 40 million other sperm cells. Just knowing that makes me so psyched. That’s my religion right there. I think people tend to lose the plot and need to be reminded that we are animals. It gives you a good perspective. It’s a great thing. We are beautiful animals.