This is the second of a special three-part Voice report on Athabasca University’s 2009 Convocation, which took place June 11, 12, and 13. The Voice offers its warmest congratulations to all this year’s graduates!

Accompanied by bright blue skies and balmy temperatures, graduands and guests filled the halls of the Athabasca Regional Multiplex once more as the final two days of convocation got underway.

On Friday, June 12, the procession began with a performance that was uniquely suited to the day’s program: the sounds of the Northern Cree Singers filled the complex, their honour song a fitting tribute to Chief Ovide William Mercredi, that day’s recipient of AU’s Honorary Doctor of Letters.

Before the conferring of degrees, though, the graduands, guests, and academics were welcomed by local officials, including Jeff Johnson, MLA for Athabasca-Redwater; Lionel Cherniwchan, Councillor of the Town of Athabasca; and David Yurdiga, Reeve for the County of Athabasca.

As Lionel Cherniwchan noted in his greeting, the community of Athabasca shares in the success of AU graduates, and he invited everyone to walk the town’s trails and enjoy the local scenery during their visit.

Each day of convocation also began with an official welcome from Joy Romero, Chair of AU’s governing council, and AU President Dr. Frits Pannekoek. As greetings were offered, many in the audience found their attention on a feature that was new to convocation this year: the large screens set to each side of the stage. The screens gave everyone a great view of the ceremony, as well as a preview of what the online video will look like.

The real focus, however, was the moment that so many had spent years preparing for?the conferring of degrees on AU’s graduands.

Before each day’s degrees were awarded, the petition was read, the Chair replied, and President Pannekoek addressed the graduands with this pledge: ?Do you promise, when you are admitted as graduates of Athabasca University, to observe faithfully and to maintain loyally the statutes, customs and privileges of this, your university? Do you promise to accept and exercise, with good judgement, the authority and responsibilities of the graduate and to conduct yourselves in all things loyally and faithfully to the honour of your university? Do you promise to use the knowledge, skills and wisdom you have acquired to the enhancement of the reputation of the university, for the advancement of learning and for the betterment of all??

In answer, the graduands replied in unison: ?I do so promise.? 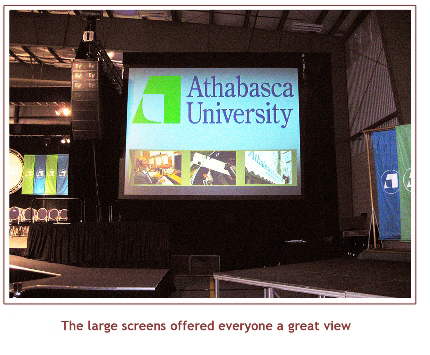 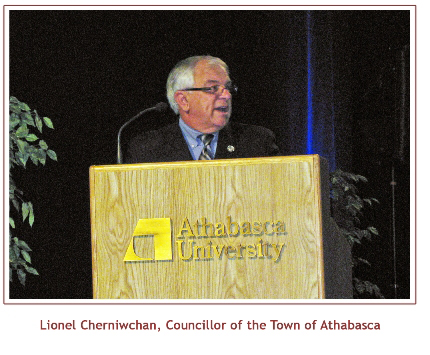 Once again, it was plain to see that AU students bring to their studies a wealth of diversity, talent, and curiosity.

Accompanied by friends and family, they attended convocation from locations as close as Athabasca and as far away as Aargau, Switzerland. As the grads came forward to receive their degrees, the brief biographies that were read out revealed that their educational journeys?and future career paths?were as diverse as the places they lived and studied in.

At least one grad plans to pursue a PhD in global public health, while others want to teach online or put their nursing skills to work in developing nations.

Even before they were ready to pursue new opportunities, their studies brought some interesting?and challenging?adventures. One grad’s bio told of having to search out the unsecured Internet connections at random hotel parking lots in order to replicate databases. Another studied while in the middle of a Canadian boreal forest, while at least one grad called in her quiz answers from pay phones. One student was proud to have completed her undergraduate degree after 30 years of study.

It isn’t all work for these AU grads, though, and future plans include an Alaskan cruise, spending more time with family, and learning how to sleep in past five a.m. There’s also a $10 dollar bet that one AU grad will collect on (a wager he won after completing his degree in less than 20 years!) 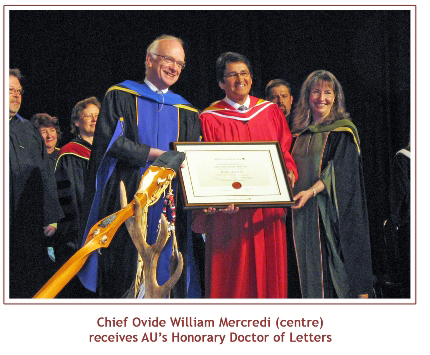 Along with the many proud AU students who received their degrees, several other special honours were presented.

On June 12, Chief Ovide William Mercredi received an Honorary Doctor of Letters degree. Chief Mercredi has spent a lifetime committed to public service, most notably ?the peaceful preservation and celebration of the rights of Indigenous Peoples.? His work has included the position of Regional Chief in the Assembly of First Nations, followed by two terms as National Chief of the AFN. 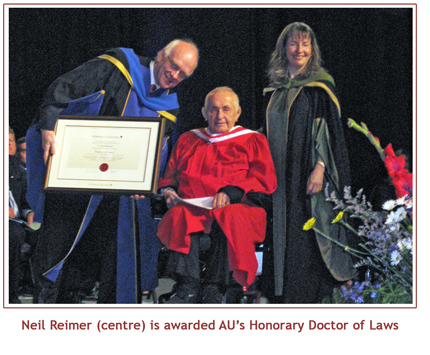 During the same day’s ceremony, the Governor General’s Silver Medal was awarded to Nadine Tobin of Calgary, Alberta, who was graduating from the Bachelor of Nursing program. The Academic Medals were created in 1873 ?to encourage academic excellence across the nation,? and the silver medal is presented to students at the undergraduate level.

Nadine also delivered the graduate’s address, and you can read the text of her speech in this issue of The Voice.

On Saturday, June 13, the graduate address was given by Russell Permann, a Master of Business Administration graduate who also attended from Calgary, Alberta.

Saturday’s convocation ceremony also saw AU’s Honorary Doctor of Laws awarded to Neil Reimer ?in recognition of his contributions to bettering the lives of working people.?

Mr. Reimer’s tireless efforts have benefited the working lives of not only Albertans, but Canadians and people around the world. His career has spanned the roles of politician, social activist, and trade union organizer, and he has also been a strong advocate of making post-secondary education more accessible to all.

As Convocation 2009 drew to a close, and new alumni posed for photographs with friends and family, the sense of expectation that began the ceremony could still be felt. The occasion marked the end of one chapter, but it also represented a new beginning?whether a new career, more studies, or simply a newfound sense of pride in achieving a goal.

The Voice offers its warmest congratulations to the graduates of 2009!

Watch for a special behind-the-scenes look at convocation in next week’s issue! 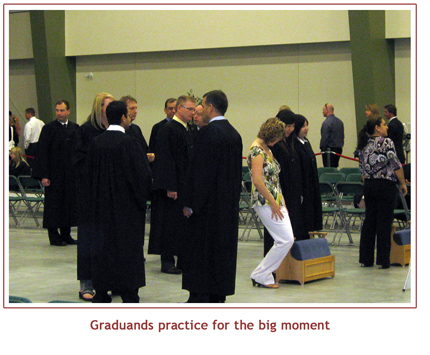 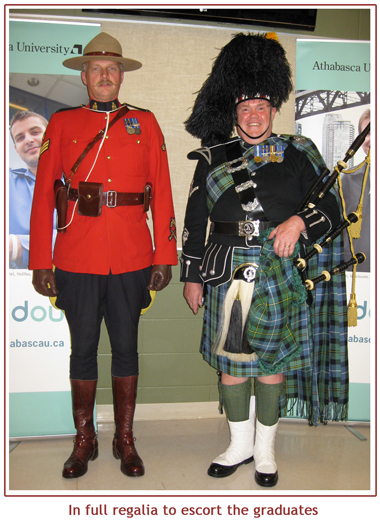 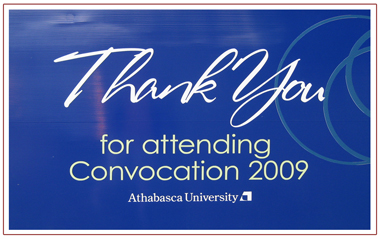 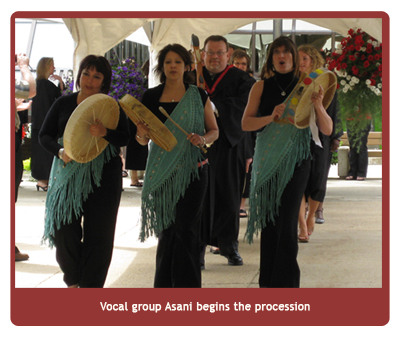