Articles
The Voice
In Conversation With . . . James Wallace

James Wallace is a musician and composer of beautiful, melodic, musical meditations infused with hope and healing. His latest album, Return to Good, was written in response to the events of 9/11. James is also active in promoting music education and environmental awareness. He will soon be touring to promote his new CD.

The following are notes from a conversation James recently had with Wanda Waterman St. Louis.

About Return to Good

?Return to Good? is not so much a return to the past as a journey toward what’s real.

On a practical level, at home in New York on 9/11 there was such fear and anxiety and horror and shock. This overtook not just America but the world, and so much of what happened since feels like a wrong turn we made.

I was an active campaigner for John Kerry, and our new president, Barack Obama. My wife and I (both Canadians) naturalized just in time to proudly vote for Barack.

Joseph Campbell said, ?The best we can do is lean towards the light,? and I really believe that in terms of the choices we make. On a spiritual level I feel we are living in a time of need for reconnection?we press buttons and ?tweet? but we need to remember to smell the flowers.

One of my biggest influences was Dr. Dawson, at the Royal Conservatory in Toronto, who showed me how to distill pure simplicity from the most complex frameworks. Also producers like Brian Eno?I loved his description of the pop song as this three-minute invitation into a garden of sonic delight?and Henry Tate, the historian who opened up my eyes to art at the Museum of Fine Arts.

I grew up singing in choirs and performing in competitions. I graduated from the Royal Conservatory in Toronto with a Gold Medal in Woodwinds, and then, on scholarship, I studied studio production and voice at Berklee. I also took classes at the New England Conservatory and Juilliard. 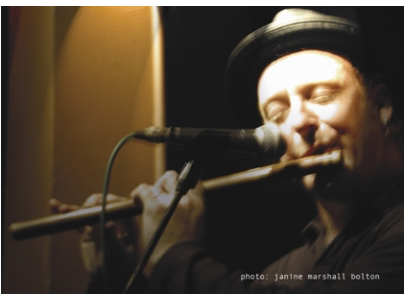 I play different types of flutes and whistles. I found a pear-wood flute in a barn in Vermont and it turned out to be from 1832! I had it restored by Van Houtte in Boston and it has this soft, mellow tone. Out on tour at Newport, I found this 50-cent tin whistle with a wooden fipple and I ended up using it on a recording at Philip Glass Studios.

I do a lot of voice work as both a singer and a narrator. I have a version of ?Danny Boy? That’s a bestseller at iTunes. I also perform and write on piano and keyboards, and over the years I’ve added guitar, bass, and percussion. You could say I do a broad range of things, but I mostly sing and play different types of flutes and wind instruments.

Since childhood I’ve heard melodies in my head. I have this muse that draws me to write and it happens anywhere. I could be at the piano, playing solo flute, or riding a train with manuscript paper. I do my best work by recognizing this energy when it arrives?then stepping out of the way so it can unfold. Because I’m trained and have a good ear for pitch, I’m fortunate in that I can work pretty much anywhere and at anytime and be confident of catching the threads to pick up with later.

The National Association for Music Education

I was a music teacher in New York City for years, and some of my students went on to music in college and did the All-State festivals. For many of them music was a lifeline to something positive and tangible. They learned that they could do things they thought weren’t possible and even achieve beyond that. This carried over to other areas of school and in their personal lives.

I had similar experiences growing up where music kept me sane and gave me hope. When I got more involved with production and recording I wanted to continue helping make music education possible for kids because I believe that It’s critical across generations to develop the ability to express emotions, have an aesthetic vocabulary, and draw from both left and right brain hemispheres. Kids with music training tend to do better in school. So I support the MENC and write essays to the papers and public offices. You can find out more at Uplifting Spirits. Another excellent group making a difference is George Lucas’s Edutopia.

Simplicity is a key to creativity and often the hardest one to achieve. When my wife and I moved to New York we lived in a tiny studio for years and this taught us to focus on what really matters. I find this has carried over into creative pursuits; where is the goal, what is the essence? By uncluttering you let the sun come out; the purpose grows clearer.