Articles
The Voice
Eras in Education – Muses and Modernity

Education has existed for as long as people have been raised by their elders. The idea of formal schooling goes back thousands of years, yet school as a mandatory part of growing up is a recent phenomenon. For instance, many of us know of or can remember a relative who attended few or no classes because they were needed on the family farm.

Today the idea of ?going to school? carries with it a certain weight, a sense of predictability and homogenization. Still, for a lot of people school was (and may still be) a miserable, oppressive experience. This led the social theorist Michel Foucault to rhetorically ask ?Is it surprising that prisons resemble factories, schools, barracks, hospitals, which all resemble prison??

Society has changed since Foucault’s work titled Discipline and Punish was published in the mid 1970s, yet questions around education remain. Have students always found it to be an arid, institutional experience? Where does distance education fit in?

Being Athabasca University students gives us a unique opportunity to actively control our interaction with the subjects that we study. Perhaps the AU experience is, in some ways, closer to other historical educational periods, times when pupil and teacher each had ample opportunity to express their individuality. By using the sociological imagination (seeing individual experience within the social whole) we can take a look at education in different historical periods?and just maybe find some answers.

In ancient Greece a woman named Sappho was known far and wide for an all-female school of the arts on the Island of Lesbos in the Aegean Sea. Sappho’s poetry and persona led her to be thought of very highly by various figures of her time. Plato, for instance, called her the ?tenth Muse,? a high honour indeed considering Muses were immortal, angelic creatures.

Today Sappho is remembered for her poetry, replete with love and yearning for the students she taught. By modern standards, a teacher in love with her pupils is considered inappropriate to say the least. Yet in ancient Greece, where nonsexual, platonic love was prized as the highest form of solidarity, Sappho’s elegant expressions of desire for her pupils arose as naturally as the turquoise surf of the Mediterranean.

On the other hand, Sappho’s poems of yearning passion sharply contrast with stolid Socrates, who ?urges the control and domination of the same desire that Sappho’s poetry celebrates.? Just as 2500 years later Foucault was questioning the passionless and oppressive nature of modern education, Sappho, by expressing her love for her pupils, embodied another way of learning, one where the subject itself became not only something that was to know but also something that was to be loved. 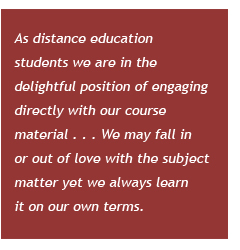 It is a matter of historical dispute whether Sappho had physical relations with any of her students. Today such desires make us nervous because they imply predatory tendencies. Recently an English schoolteacher named Leonora Rustamova published a book with references to her students and sexuality. She was subsequently suspended, despite protest from her pupils who endearingly called her ?Miss Rusty.? The purpose of her book was to encourage students to read by writing about them and thus making them the subject rather than the object of the learning process. Instead of dusty William Shakespeare or distant Joseph Conrad, Rustamova’s writing seemed natural and immediate.

Sappho had written poems to be accompanied on the lyre, the better to interest her young pupils in becoming better poets and musicians. Rustamova wrote of how the smile of one of her students felt like ?such a blessing? in order to encourage them to embrace literacy. Yet by exposing her feelings about her students, Rustamova had crossed an invisible line, one that fences education into a non-emotional and non-expressive framework.

A sociologist named Norbert Elias wrote his most important work, The Civilizing Process, about how the ?shame frontier? is pushed back such that ?walls are being erected between people.? One of his most cited examples is how books of etiquette ceased to implore readers to not pick their noses at the dinner table, presumably because such a practice was now widely considered inappropriate and therefore not worth a mention. In his section on Elias in Modern Sociological Theory, George Ritzer discusses how people’s ?instinct is slowly but progressively suppressed.?

In an educational context this means that many thoughts, opinions, and feelings are not dealt with in school. This alienation of feeling from education serves to ?suppress the positive pleasure component? that ought to make learning a joyful, creative process. Instead, school becomes boring for many students. Just as in grade school we all learned to sit conscientiously at our desks, in later years we are expected to restrain ourselves from becoming too emotionally involved or too critical of our educational surroundings.

In Elias’s study, he found that the mediaeval aristocracy were the arbiters of fashion and taste. Likewise, in today’s society, teachers play a major role as ?specialists in the elaboration and moulding of social conduct.? From an intellectual perspective this means that some ideas and feelings are more acceptable than others. That Sappho’s love for her students could be akin to a modern teacher’s feelings for her pupils becomes a disturbing thought because we have come to believe that there must always be a barrier between teacher and student and, far more importantly, between student and subject matter.

As distance education students we are in the delightful position of engaging directly with our course material. Our tutor, though important, plays a much lesser role than a traditional instructor. We may fall in or out of love with the subject matter yet we always learn it on our own terms. In this way, distance education provides something outside of normal schooling: the opportunity to learn without ?being taught? and to absorb information in a non-coercive manner.

The way students have learned throughout history reveals a variety of learning methods. It seems to me that there is no better place to investigate different historical and cultural contexts of education than as a distance education student. As a character in the Ralph Ellison novel The Invisible Man states, ?sometimes a man has to plunge outside history? in order to see or experience things differently. I think it is reasonable to say that AU students have all plunged outside education as it is normally imagined. With this separation we forge unique and valuable perspectives.

Eras in Education – Muses and Modernity