Articles
The Voice
In Conversation With . . . Ian McKay, Part I

Ian McKay is the author of Reasoning Otherwise: Leftists and the People’s Enlightenment in Canada, 1890-1920 (see Voice review here), the winner of 2009’s Sir John A. MacDonald Prize.

Why the History of Canadian Socialism?

I have been interested in working-class and radical history since the 1970s. Before 2000, I always worked on a local scale, particularly on subjects relating to Nova Scotia coal miners. This began to change in the 1990s, when I started studying the life and work of Nova Scotia writer and Montreal activist Colin McKay (no relation to me), who?rather to my shock and disgust?was using evolutionary theory, particularly that of Herbert Spencer, to explain the world around him.

I became quite interested in trying to figure out how and why a turn-of-the-century radical would have taken up with the likes of Spencer, was associated in my mind with reactionary social theory. The result was a heavy collection of McKay’s writings, For a Working-Class Culture in Canada, which the Canadian Committee on Labour History brought out in 1996. Researching this exposed me to a lot of the socialist writing that was influencing people at the time.

Four years later, Labour/Le Travail, Canada’s labour history journal, asked me to write a piece for its millennium issue on the history of Canadian socialism, and that got me thinking about the movement’s broader patterns of development, reflections ultimately reflected in Rebels, Reds, Radicals: Rethinking Canada’s Left History (Between the Lines, 2005). By that point I was completely committed to the big project of doing a general history of the Canadian left. Reasoning Otherwise is the first volume of a projected trilogy?I am presently hard at work on volume 2, which is tentatively called Revolution’s Iron Gates, which I fervently hope to deliver within four years.

Marx and Gramsci have written the works that have most directly inspired me. I am particularly drawn to Marx’s historical analyses and to Gramsci’s Prison Notebooks, although I must say all of Gramsci’s writings have something to offer. 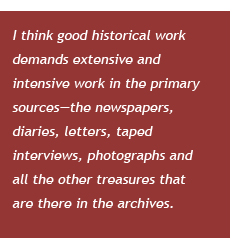 Geoff Eley’s Forging Democracy and Robert Stuart’s Marxism at Work both offered exciting models of the kind of left history I am trying to write?that is, not trying to haul up past radicals before the court of present-day opinion and try them for their misdemeanours, and not trying to develop sentimental cults of departed heroes, but something that is both analytical and sympathetic at the same time and which pays close attention to the interplay between the languages of politics and socio-economic structures.

Like many Marxist historians of my generation, I was deeply affected by E.P. Thompson, E.J. Hobsbawm, Rolande Trempé, Raphael Samuel, and Royden Harrison, and I share with Antonio Gramsci a conviction that mastering past patterns of left history is a crucial step to creating a more effective and dynamic left. The new editions of the Prison Notebooks offer extremely important new insights for historians.

I grew up in Cornwall, Ontario, and Sarnia, Ontario, both industrial cities, renowned in the province for their sketchy environmental records. Like many children of the ?60s I was radicalized by the War in Vietnam and found it scandalous that Dow Chemical, one of Sarnia’s biggest employers, was profiting from the making of napalm.

As a summer job, I also worked at the Sarnia newspaper and saw first-hand how corporations can directly shape the ?news,? in some cases by having their press releases published virtually unchanged as ?news? for the consumption of the public. I have been a Marxist since my teens, and expect to remain one until I die.

I think good historical work demands extensive and intensive work in the primary sources?the newspapers, diaries, letters, taped interviews, photographs and all the other treasures that are there in the archives. Not only does this enrich the base of evidence on which we draw, but I personally find that while working on these sources, my mind is encouraged to find surprising connections between them. Once the primary research has reached a certain point, it is time to start writing, and to do so with a minimum of outside distractions and then to return again and again to the sources when new questions come up. The best strategy for me is a back-and-forth between the primary sources and the text I am writing.