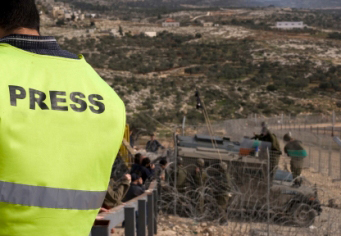 For students seeking to hone their journalism skills while gaining a better understanding of the military, AU may have just the course: Communications Studies 451 – Journalism in Conflict Zones. This course is offered in partnership with the Canadian military, and features a three-week on-site practicum at CFB Wainwright, near Edmonton, Alberta.

At CFB Wainwright, Canadian soldiers undergo training to prepare them for service overseas. This training is ?extraordinarily intense,? as ?situations and conditions in Afghanistan? are replicated ?as faithfully as possible,? explains Captain Tom St. Denis, the Exercise Media Operations Officer at Wainwright. Two weeks of each Maple Guardian exercise is devoted to ??force-on-force,? during which time the troops are, for all intents and purposes, ?in Afghanistan? 24 hours a day, seven days a week.?

To help simulate conditions in Afghanistan as closely as possible for soldiers, civilians are hired to portray Afghan villagers and refugees during exercises, while other Canadian troops portray the Taliban and other Afghan insurgents.

To help give soldiers media relations experience, and to provide them with ?insight into how they and their mission are being portrayed to the Canadian audience and to the local, Afghan audience,? journalism students also participate in Maple Guardian exercises, portraying both the Canadian and Afghan media. Previously, “second- and third-year journalism students from about 14 colleges and universities across Canada” were recruited for the program, explains Capt. St. Denis.

Dr. Evelyn Ellerman, course professor for CMNS 451, says that recently, however, the Canadian military approached Athabasca University for help ?finding slightly older, more mature students than they had attracted? from other Canadian universities, and seeking ?journalism students who could best approximate the hard-hitting questions that professionals ask.? The AU course Journalism in Conflict Zones was born.

CMNS 451 is a six-month course that aims to increase students? awareness of and proficiency in the contemporary practice of journalism in conflict zones. Three weeks is spent on-base at CFB Wainwright. Upon arriving at Wainwright, students are first given an orientation to Afghanistan, and then participate in the two weeks of force-on-force training. During this period, students are mentored by two experienced former war correspondents, usually former CBC journalists. These mentors act as news producers, and ensure that ?students role play to the standards of any broadcast newsroom,? says Dr. Ellerman.

Each evening, teams produce evening newscasts and printed newssheets, and these are shown to the troops the next day so that soldiers can see how their words and actions are reported. During the course of their practicum, students are given the opportunity to act as both embedded Canadian journalists and as local Afghan media, taking turns in different roles and rotating every few days. 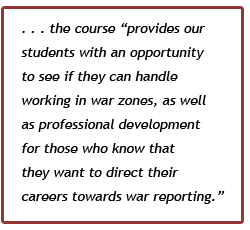 Though students may come to the base prepared for excitement, they should also be prepared for long days filled with hard work, Capt. St. Denis cautions. ?Anyone contemplating registering for the course should be aware that they’ll be working very long hours (typically 15 to 18 hours a day) and that there are no weekends and no time off.? Furthermore, students must be physically fit, as they are ?expected to keep up whenever the soldiers are on the move,? as well as to carry their own cameras, ?batteries, tapes, a microphone and cords, plus a sleeping bag, a rucksack, a camp cot, change of clothing, toiletries and so on.?

Journalism students can also be ?wounded or killed? during exercises. In Maple Guardian exercises, all participants wear special electronic vests, and soldiers shoot each other with electronic pulses, similar to a game of laser tag. Journalism students, too, are fitted with these vests, and therefore face the same ?life or death? perils as soldiers and other exercise participants.

In spite of the hard work and long hours, however, former students have found the course very rewarding. Capt. St. Denis reports that ?the journalists we have had in the programme all say that it helped them develop a serious appreciation for the Army’s culture and its people, and that it dispelled a lot of stereotypical thinking about soldiers.? Dr. Ellerman, meanwhile, points out that the course ?provides our students with an opportunity to see if they can handle working in war zones, as well as professional development for those who know that they want to direct their careers towards war reporting.?

Dr. Ellerman proudly refers to Journalism in Conflict Zones as ?the only opportunity in Canada to discover what it is like to report from a battlefield (without actually being on a battlefield!).? 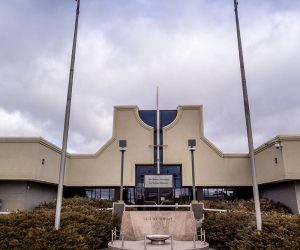