Articles
The Voice
In Conversation With . . . Ian McKay, Part II

Ian McKay is the author of Reasoning Otherwise: Leftists and the People’s Enlightenment in Canada, 1890-1920 (see Voice review here), the winner of 2009’s Sir John A. MacDonald Prize.

The closest connection between the book and myself comes with the stories in it that come out of Springhill, Nova Scotia. I interviewed many miners in that coal mining town who first went down the mine as children; they were sometimes so little that they needed help to climb into the coal cars, and some miners told me that when they started work they still believed in Santa Claus. I was deeply affected by my research on the coal miners, and some day would like to return to their stories.

I have found the strategy of ?reconnaissance??essentially, seeing oneself as part of a collective struggle to make sense of the past, paying particular attention to underlying structures of thought and action?to be very liberating because it essentially says, ?don’t worry about having the last word on this subject, and don’t delay writing until you are in a state of certainty about it.?

Although I’ve been pleased by the reception to Reasoning Otherwise so far, I anticipate it will ultimately generate extremely fierce resistance, both from my fellow leftists and from liberals, since it takes up so many positions and looks at so many topics that are deeply controversial. I only hope these controversies themselves arouse new interest and new research in left history. 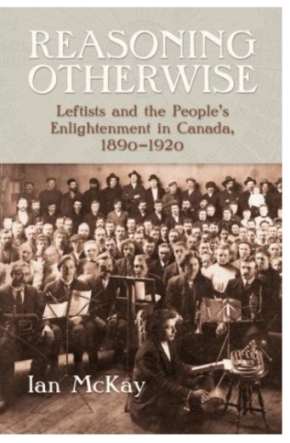 I think the left in Canada is on the verge of a renaissance, one aspect of which will be to knit together the worlds of science and human values?almost following in the footsteps of ancestors a century ago (although undoubtedly not coming up with the same positions). I can’t imagine a revolutionary solution to the environmental catastrophe confronting humanity that does not combine, in to-be-debated proportions, Darwin and Marx?i.e., a sense of a species struggling to understand and to change its evolutionary pattern, which if left unchanged will lead to catastrophe, along with the equally powerful sense that without changing how our societies are structured, such changes in the species are impossible.

It’s early to tell, but I suspect the intertwined crises of global environmental transformation and capitalist meltdown will spell the end of the neo-liberal consensus that has been so powerful since the 1970s. As one Québec writer has recently said, ?Pour sauver le monde, il faut sortir du capitalisme??in order to rescue the world, you have to exit from capitalism.

This used to be a fringe position. Now I can see it quite rapidly becoming the basis of a powerful new left. I talk to quite mainstream, liberal people who have no difficulty at all in linking the survival of humanity with a revolutionary transformation of all the ways we make things and relate to each other.

There is a huge audience for a genuinely revolutionary left-wing program. It seems to me we are in the early stages of a vast cultural change. To navigate a moment like this one helpful tool?hardly the only one, but a helpful one?is an accurate, clear-headed sense of how people in roughly similar situations of crisis in the past crafted movements similar to the ones we need to shape today. We are not the first leftists who have had to re-invent ourselves in the face of a fast-changing world.

In Conversation With . . . Ian McKay, Part I