Articles
The Voice
In Conversation With . . . Michael Bernard Fitzgerald

Michael Bernard Fitzgerald is a Calgary folk singer-songwriter with a unique, passionate vocal style and a penchant for performing with colossal numbers of people on stage. Among other honours he was voted ?most promising songwriter? at the Calgary Folk Festival.

Fitzgerald recently released The MBF Love EP, a wondrous collection of songs about love lost and gained. Michael recently took the time to talk with Wanda Waterman St. Louis about his musical career.

I used to play live a lot and I liked the different sounds you can get from a microphone, moving in close, and then pulling away, making different sounds. I guess That’s how it came about.

Those Huge Groups of People

I love working with large groups. If it turns into chaos, then so be it. That’s the beauty of it. I like it because It’s epic and theatrical. In the most recent stage show I did there were 120 people on stage. We had only rehearsed a month before and there was a chance of it getting crazy and going off the rails but I kind of liked the fact that it just came together.

The ?Brand New Spaces? video was taped in a ballroom. That was a rehearsal for the Jack Singer Show. The audio to that was actually the recorded song. The way the camera goes around and finds people smiling is great. 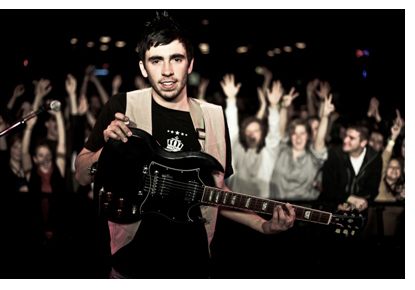 All the songs on this album are based in my experience but I sort of take the story and run with it when I write a song. Sometimes I have too many ideas to jot down and sometimes I don’t have any ideas. I haven’t yet applied a science to how that works.

I don’t have much musical training. I took guitar lessons when I was younger. My parents divorced when I was very young but then they both remarried so I grew up with two sets of parents. I’ve actually been thankful for that. Those four parents have been very supportive of my musical career.

There was a video on YouTube for a while of Paul Simon’s ?The Obvious Child.? The video is live in Central Park and he had this incredibly huge band, and there were people in the audience as far as you could see. That was such a cool moment. I was at the Coldplay concert in Calgary and that was really exciting. It’s hard to know what’s going to inspire me. A lot of things make me strive to up the ante.

I maintain some of my own religious beliefs, but I tend not to follow politics a lot. I don’t read newspapers or watch TV and I hardly ever even look at the weather forecast. That might be seen as a silly approach to life but I just kind of roll with things. I learn about what’s going on in the news by hearing it from my friends, and I respond accordingly.