?When I feel sad I go for a walk in the country and I touch the trees. I talk to the birds, the flowers, the insects. . . and I feel better. I swear?I always feel better.?

?The courage of the poet is to keep ajar the door that leads into madness,? said Christopher Morley. It’s a statement that resonates with poets even though privately we wrestle with what it means.

As a license to be eccentric, emancipated, and adventurous in a grey cubicle world this is an exquisitely consoling statement. But sometimes the door to madness swings open all the way. Sometimes the decline in reason is helped along by an inherited inclination toward mental illness and sometimes by addictions and traumatic events. There is no sugar-coating this particular occupational hazard and no romanticizing the hell endured by the artist who has taken leave of her or his senses.

There was a real Seraphine (Séraphine Louis of Senlis, France), whose art hangs in prestigious French galleries today, and her style was much like the paintings in this film. Provost did a remarkable job portraying not only general facts of her existence but also the sense of precariousness that dogged it. 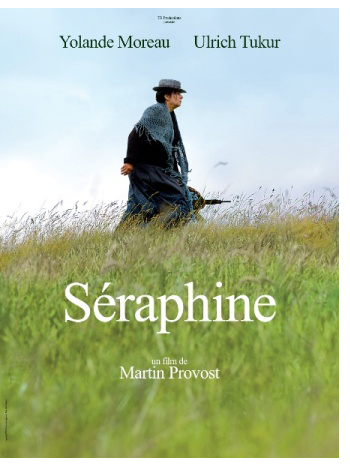 Lately the French have seemed enamoured with peasant autodidacts?individuals from humble backgrounds who turn out to be, beneath their grimy exteriors, veritable birds of paradise, richly deserving of high honours which their bourgeois societies are not immediately willing to hand them (see my piece on The Elegance of the Hedgehog). Is this preoccupation with the unsung gifts of the lowly a denunciation of the oafish absurdity of the class system or an assertion that art cannot be restrained?

The dilemma facing the socially conscious artist is the truth that stares one in the face at every turn of history?the best art is often produced by oppressed peoples within rigid class systems. To promote such a social paradigm is to further injustice. It appears that art, like grapevine roots, needs a bit of a challenge in order to produce a quality vintage, but also that some challenges (like racial segregation and bourgeois bigotry) seem more effective than others (such as slavery and totalitarian censorship).

This film is so richly steeped in French country life that you can almost smell the pig manure and truffles. Wall interiors are painted a vibrant oak-leaf green That’s lovely in its natural setting but somewhat garish indoors. Each scene is a visual feast (It’s intoxicating to watch Séraphine furtively jam her hands into a pot full of pork livers to draw out blood for her homemade paints).

Séraphine, who has experienced a life of terrible suffering, naturally has a powerful longing for sweetness. Her spirituality suggests an awareness of the love that surrounds the natural world and a desire to be close to the things that love has made. We see her gazing beatifically at the sky as she lifts her skirts for a piss or sits in a tree or stops to admire a flower garden.

In order for her soul to survive Séraphine must create beauty; she slaves for hours on lush, vibrant paintings (she made her own paints, and the colours look obviously unique to her work) of great bunches of flora that seem to be exploding inches from one’s face.

Séraphine claims to have a guardian angel that guides her hand. During the second war she meets a German art critic who recognizes her talent and convinces her that this is her vocation, a thing she hasn’t heard before (except from her angel). When the critic must leave they lose touch, but Séraphine devotes herself more than ever to her work, choosing to eat one meal a day so that she won’t have to take in laundry, devoting her time and strength to painting. (No doubt this contributed to her mental exhaustion.) Eventually the critic finds her again and becomes her patron. Unfortunately for all concerned, real-life fairy godmothers are not infinite wells of resource, and the transition from tenement to manor house is not always a dream come true.

Séraphine manifests eight of The Mindful Bard’s criteria for films well worth seeing: 1) it is authentic, original, and delightful; 2) it confronts existing injustices; 3) it makes me want to be a better artist; 4) it displays an engagement with and compassionate response to suffering; 5) it inspires an awareness of the sanctity of creation; 6) it is about the attainment of the true self; 7) it stimulates my mind; and 8) it poses and admirably respond to questions having a direct bearing on my view of existence.