Articles
The Voice
In Conversation With . . . dZ

Recently dZ took a moment to chat with Wanda Waterman St. Louis about her budding career.

When Did it Start?

I started recording last year, but I’ve been playing guitar since I was four. Then a few years later I started playing drums. Then after that I taught myself how to play bass, and I’ve been playing all three ever since. I play a bit of keyboard, too.

First I laid down the guitar, then the drums, and then the bass. Everything just comes to me. The lyrics were really hard because I don’t have a lot of experience of life yet. Nobody helped me with the songwriting but my producer, Carl Jennings, he helps me with anything extra. He’s great to work with. He always wants to get the job done but he also likes to take his time.

I don’t get tired after working in the studio for hours; it actually energizes me.

I’m still an ordinary kid?I just play music, which not a lot of kids do. I do everything a normal kid would do. I play a lot of sports. At recess time my friends and I will go out and play soccer.

We have a lot in common, like the same interests and stuff. They think It’s really cool that they have a friend with a musical career, but I don’t think they really understand it right now. 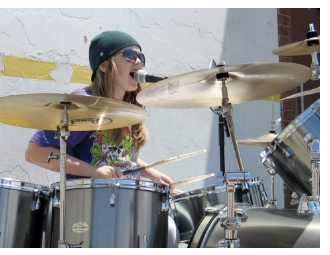 What Feeds Your Creativity?

I’m creative because of the atmosphere around me and everybody I know. My friends and family are all stimulating, interesting people.

I’ve been listening to Top Johnny! a lot because I’m going to go see them soon. I also listen to Set Your Goals. they’re a new band; they’ve just released a new album and It’s really good. And I listen to Ann Boleyn. Paramore’s my favourite band.

I read a lot. Sometimes I don’t have time because I’m really busy with my music. I like scary books. I especially like the book Skeleton Creek by Patrick Carman. I like how he mixes text and videos on the Internet together to make it so real.

Sometimes I take a day off and watch movies. I like the movie Up. It’s really touching and the thing I like is that it has a happy ending. Happy endings seem so much better than when everybody dies or something.

I’m hoping to get an EP done by the end of this year. I’ve written five songs so far.

I started writing songs about two or three years ago and I couldn’t do anything with them because I didn’t have the software I needed on my computer. But then we met Carl Jennings and everything went from there.

I’d like to stay in the music business. If being a musician doesn’t work out I ‘d like to be a producer or an engineer. I love recording stuff. It ‘s really fun. I like giving people ideas, too.