?Find Our Eyes, Mistress, and Our Souls Will Be Free!?

?I saw pale kings and princes too,
Pale warriors, death-pale were they all;
They cried??La Belle Dame sans Merci
Hath thee in thrall!??

When I was Coraline’s age I had a Barbie doll named Wendy. Wendy’s life was considerably more charmed than was mine. Wendy’s mother was actually excited about ensuring that her daughter was the first girl in grade four to get a new skipping rope for spring. And not just any skipping rope, but a bright pink skipping rope with long multicoloured tassels on the handles.

Fortunately, I outgrew Barbies before Wendy’s mother could turn into a skeletal, soul-sucking banshee.

Coraline is past the age when it becomes developmentally necessary to abandon infantile egocentrism. But like all of us she hasn’t abandoned it completely; she wants to grow up but she still wants to feel like the centre of things. Being reminded by busy parents that She’s not the centre of things just whets her appetite for an existence in which her very existence is celebrated and instant gratification is served with a smile. 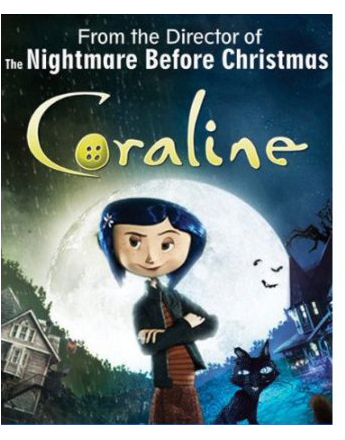 The setting is a huge pink Victorian mansion, turned into apartments, in the middle of nowhere. (The incongruity is delicious.) The colour of the house suggests that the danger (or opportunity) in the story may be a peculiarly feminine one. One of the other apartments shelters two ageing actresses (one with massive Freudian breasts) who inadvertently serve as two of several spirit guides in Coraline’s journey into true selfhood.

In Coraline’s alternative world everyone has buttons for eyes. If she surrenders to the magic of this world she too must remove her real eyes (the windows of her soul) and sew on buttons.

The Belle Dame (Coraline’s mother on the other side) is determined that everyone must replace normal emotional responses with displays of familial bliss. Those who submit then watch their souls dissolve.

If you’ve ever known a mother like this, you’ll empathize with the poor children the Belle Dame has locked away (having eaten up their lives, as one of them relates). A mother who compels her children to be pleasant in the wake of abuse and trauma is investing in her children’s future psychological infirmity. It isn’t easy to resist the Belle Dame’s purr: ?They say even the proudest spirit can be broken?with love!? The child who resists is a hero indeed.

The name Coraline is an odd choice, but it may have been picked for coral’s symbolic role as a healer of madness and a bringer of wisdom. Coral also protects children, and, because it grows under the sea, carries a connection with the unconscious.

Bruno Coulais’s score is utterly enchanting and so beautifully echoes the sweetly odd tenor of this visual feast of a movie that he should be showered with awards from every quarter. Coulais wrote all the music except for one rollicking number from the very recognizable They Might Be Giants, which melds seamlessly with the rest of the soundtrack.

Coraline manifests ten of The Mindful Bard’s criteria for films well worth seeing: 1) it is authentic, original, and delightful; 2) it confronts, rebukes, and mocks existing injustices; 3) it gives me tools enabling me to respond with compassion and efficacy to the suffering around me; 4) it makes me want to be a better artist; 5) it gives me tools which help me be a better artist; 6) it displays an engagement with and compassionate response to suffering; 7) it is about attainment of the true self; 8) it provides respite from a sick and cruel world, a respite enabling me to renew myself for a return to mindful artistic endeavour; 9) it stimulates my mind; and 10) it poses and admirably responds to questions which have a direct bearing on my view of existence.

Coraline was recommended to The Mindful Bard by 11-year-old Tamika Meuse of Bear River, Nova Scotia.

From Where I Sit – Just Gravy