Articles
The Voice
In Conversation With . . . Gurf Morlix

Gurf Morlix is an Austin-based musician, songwriter, and producer. He’s worked with Lucinda Williams, Jim Lauderdale, Jimmy LaFave, Sam Baker, and BettySoo, among many other notables, and has put out a number of solo albums including the recently released Last Exit to Happyland (soon to be recommended in The Mindful Bard). Gurf recently took the time to answer some questions from Wanda Waterman St. Louis.

I took three guitar lessons then quit because they weren’t teaching me what I wanted to learn. I learned on my own. I was obsessed with the guitar.

What other instruments do you play?

Just about anything I can get my hands on, with the exception of horns and violin. If It’s lying around, It’s fair game.

BettySoo describes you as a man who has long friendships. Can you explain why you tend to hold onto friends longer than most people?

Why would anyone not hold on to friends? Unless there’s a good reason for letting go, which is rare.

Just some time and a quiet place to sit. I write most of my songs late at night in my cabin in Ontario.

If you had to choose, which performer would you most like recording with again?

I couldn’t possibly choose. I love all the artists I work with. I’ve been extremely lucky to work with some of the best songwriters in the world!

Are there any books, albums, or films that have been landmarks in your creative development; i.e., have inspired your own development and work? 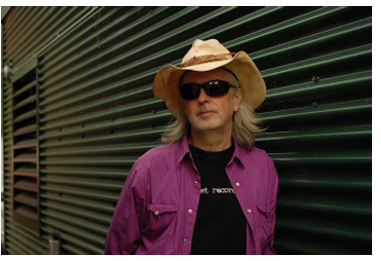 Well, first of all there’s Hank Williams, Muddy Waters, Bob Dylan, and the Beatles. It doesn’t get any better than those artists. I’m influenced by everything I see and hear. I just reread The Magus, by John Fowles, and it blew my mind all over again. I can’t think of a more compelling film than Who’s Afraid Of Virginia Woolf.

How, if at all, did your childhood prepare you for the musical work You’re doing now?

I knew from the time I was very young that it was gonna be music for me. I just knew I could do it.

Do you hold to any political ideology or religious belief?

Good triumphs over evil. Intelligence should help carry us through.

Why are you still based in Austin?

Austin is a really great community! I can’t imagine living anywhere else. Great music, of course, and great weather, great food, great geography, and a lot of forward-thinking people.

And what are you doing in Canada right now?

Hanging at the cabin for the summer?fishing, swimming, chopping wood, and writing. Always writing. I’m playing some of the great festivals as well. The Canadian folk festivals can’t be beat.

What does the music of the American south mean to you?