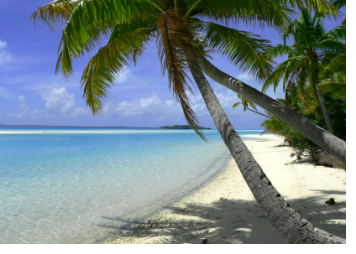 Colonial Education and the Introduction of ?The Word?

Imagine yourself living on a beach. When you were young your parents and elders taught you to swim and fish. Then one day some missionaries arrived. They made you sit indoors at a desk and told you that they had turned your oral language into a written language. They did this because to know their one true God you had to be able to read their Bible. The starting point of the new education was knowledge of transcendental truth, rather than knowledge of survival in your earthly surroundings. It all seems very strange to you. After all, the weather is beautiful and all the necessities of life are outdoors.

During the colonial era, education involved exporting the European way of life to far-flung regions of the world. The resulting interface of cultures affected everyone.

In American Samoa during the 1830s indigenous peoples received their first taste of European educational practices. Missionaries arrived in 1830 and had set up the first school by 1835. By the missionaries? own account they had to contend with ?climate conditions, disturbances from flying insects and other passerbys, not to mention the lack of school materials.? Interestingly, girls? schools were opened many years before boys? schools.

The missionaries associated learning with the ?three Rs? (reading, writing, and arithmetic), which were literally foreign to exclusively oral Samoan culture. The Euro-Christian religion and world view was introduced. In the words of postmodern theorists Deleuze and Guattari, the new education utilized an ?arborescent? perspective based on a unified single truth embodied in ?the Word,? otherwise known as written language. ?The arborescent system pre-exists the individual, who is integrated into it at an allotted place.?

In this way, the form of European education forced Samoans to fit into its teaching methods, rather than allowing the Samoan culture to have control over how it would be taught. By writing down the Samoan language, the missionaries had attempted to solidify a changeable, oral culture into an unchanging, timeless form.

Deleuze and Guattari also note that arborescence involves an attempt to enforce hierarchy and conformity: ?when there is no unity in the thing there is at least unity and identity in the word.? In Samoa the written word produced, rather than recorded, a culture that was previously expressed by individuals who came and went as generations grew old and were replaced. Had the missionaries not been so convinced of their one best way of educating young people, they might have syncretized (combined) their teaching methods with the vibrant cultural traditions of the Samoan people.

We always see other cultures from the perspective of our own. Benjamin Lee Whorf, a 20th century anthropologist, developed a theory stating that ?the thoughts we construct are based upon the language that we speak and the words that we use.? 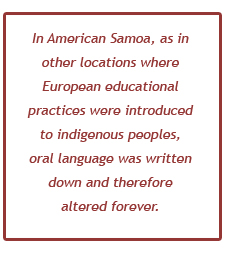 For instance, in Japanese there is no word for water; water must be specified as either hot or cold. In the same way, Russian has two words for the colour blue. The basis of Whorf’s hypothesis was the language of a Native American tribe called the Hopi whose mother tongue ?has no words for past, present, and future? although they do have an awareness of time as a ?continuum.? In this way, a culture with a different conception of time will act in a different way in regards to schedules and timetables.

Whorf based his hypothesis largely on contact with a single Hopi speaker who lived near him in New York. In fact, he only visited the Hopi in their American Southwest homeland a single time. The starting point of Whorf’s theory, then, was his own culture’s conception of time and a supposed opposite point of view: the lack of time. Likewise, the missionaries in American Samoa believed that their ?cultured? version of truth was only understandable in terms of the written words of the Bible. Left out of the equation in both cases is the possibility that there are more than two opposing ?truths.? Deleuze and Guattari called such a non-binary epistemology (way of seeing and knowing) a ?multiplicity? which exists in contrast with (though not opposition to) the ?transcendence of the idea.?

Deleuze and Guattari’s theory of multiplicities suggests that social reality is ?a complex structure that does not reference a prior unity.? Missionary schools were not teaching truth, they were teaching the Euro-Christian version of truth. In fact, all education can be seen as a ?patchwork or ensemble without becoming a totality or whole.?

To be educated is to be taught one point of view rather than the point of view. In Math textbooks the answers are in the back of the book yet the pupil must show her work in order to demonstrate an understanding of, and loyalty to, the process of arriving at the correct answer or interpretation of reality. In the Arts the student is expected to adhere to the prevailing interpretation of events. Deleuze and Guattari differentiate between ways of learning which they call ?maps? (based on a reproduction of reality as it is found) and ?tracings? (which are pre-fabricated and do not change to meet actual reality). Tracings always encounter resistance because they are by nature coercive and unfulfilling.

Deleuze and Guattari note that ?in the case of the child, gestural, mimetic, ludic, and other semiotic systems regain their freedom and extricate themselves from the ?tracing,? that is, from the dominant competence of the teacher’s language.? Nature also does this! The insects and weather of the Samoan islands were a direct challenge to the world view and truth, or ?tracing,? of the missionaries, which was itself predicated on a colder, drier, and more insect-free geography.

In American Samoa, as in other locations where European educational practices were introduced to indigenous peoples, oral language was written down and therefore altered forever. This colonizing effect profoundly changed the way young people learned about the world around them. It made things seem more absolute and certain, consisting of dualisms such as good and evil, heaven and hell, written and spoken.

In an oral culture, it is the speakers who teach and learn, whereas in a written culture such as our own it is the word on the page that professes to hold the key to truth. By ?recording? a spoken language, the missionaries in American Samoa irrevocably altered the course of Samoan culture. It is perhaps a bit ironic that today Samoan politicians worry that illiteracy rates are too high. The dominant colonial culture has succeeded in having its educational forms adopted and authorized.