Columns
The Voice
The Mindful Bard – Gregory Pepper and His Problems, With Trumpets Flaring

CD: Gregory Pepper and His Problems, With Trumpets Flaring

Despairing Surfers Dancing the Funky Chicken under a Mirror Ball

?Jumping off a building?what a scary way to die.
Starving in the desert?such a boring way to die.
You can do it in November or the middle of July,
But It’s still called suicide if you try.?

Gregory Pepper, ?If You Try?

Musically eclectic without sounding vainglorious or contrived, Gregory Pepper puts the run to any preconceptions that experimental music is unlistenable. These tunes are actually catchy. You’ll find yourself humming them happily while clipping your toenails.

Pepper puts out a song a week and every one, if this album is any indication, sounds fresh and original. There are nuances of Gilbert and Sullivan, Kurt Weill, British Invasion, Surfer Rock, doo-wop, disco, and probably a few more genres that I’ve missed.

Inside the CD cover there’s a paper doll cut-out of Gregory himself with an invitation to copy it onto cardstock, cut it out, colour it, place it within a diorama and email Gregory a photo. As soon as I get done doing my Gregory Pepper ballroom diorama (complete with crepe-paper bananas) I’ll be dressing my doll in head-to-toe Bermuda plaid and a narrow tie. 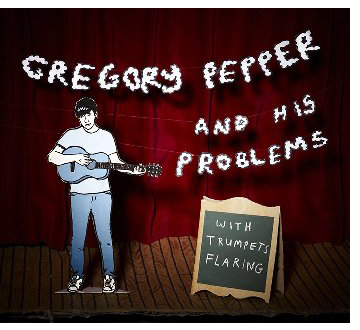 The album is a network of contradictions, Waitsian in its strange combination of raunchiness and pathos, experimental but grounded in conventional musical styles.

A number of tracks, notably ?It Must Be True,? sound like The Beach Boys, and Pepper has often cited Brian Wilson as a musical model.

Pepper’s singing is so smooth and heartfelt, his musical styles so nostalgic, that a ludicrous irony often emerges. ?If You Try,? for example, is a ghoulishly morbid song about suicide, sung in a doo-wop style, and well worth savouring repeatedly.

?Gregory Pepper Coronation? is a delightful auto-tribute, as gratifying and tongue-in-cheek as Nikki Giovanni’s poem ?Ego Tripping.? Bonanza meets Caligula in this glorious anthem to Self.

The juxtaposition of ?If You Try? and ?Gregory Pepper Coronation? provides a shining example of the extremes of self-esteem often encountered within the artistic/creative personality; you either consider yourself better than the masses or somehow beneath them, alternating between narcissistic euphoria and self-loathing lows.

With Trumpets Flaring manifests five of The Mindful Bard’s criteria for music well worth a listen: 1) it is authentic, original, and delightful; 2) it displays an engagement with and compassionate response to suffering; 3) it is about attainment of the true self; 4) it provides respite from a sick and cruel world, a respite enabling me to renew myself for a return to mindful artistic endeavour; and 5) it stimulates my mind.

In Conversation With . . . Gregory Pepper and His Problems, Part II