Publisher: Between the Lines, in association with New Internationalist Publications Ltd.

What is ?World Music? Saying About the World?

?. . . this memory was also the beginning of a realization that music was charged with meanings that go far beyond the organization of notes on a stave. Music is greater than that: it is a multidimensional system that can at any point require new instruments to express new sounds, the blessings of ancestors or the return to ancient systems of knowledge.?

Louise Gray, from The No-Nonsense Guide to World Music

Most blues guitarists are familiar with Robert Johnson’s story about the dark man at the crossroads who took his soul in exchange for a profound musical ability. (Gurf Morlix references this myth in his recent song ?Crossroads,? with a canny twist at the end: ?I know some people who sold their souls to the devil, and they don’t sound nuthin? like Robert Johnson.?) Go deep enough into any influential world music genre and you’ll find similar creation myths, attempts to explain the magic created by a uniquely mesmerizing sound.

Is the term ?world music? meaningless? Yes and no, according to Gray. But she doesn’t attempt to replace it, so obviously the term is eminently practical regardless of the hordes that consider it demeaning when applied to them.

The method Gray uses to disseminate her gargantuan subject is to locate nerve centres of musical inspiration all over the planet and to follow the spreading of their concentric circles until they fade out or morph into other forms. Most of these loci have distinct political contexts, but others are simply well-aged and mellowed products of specific cultures. 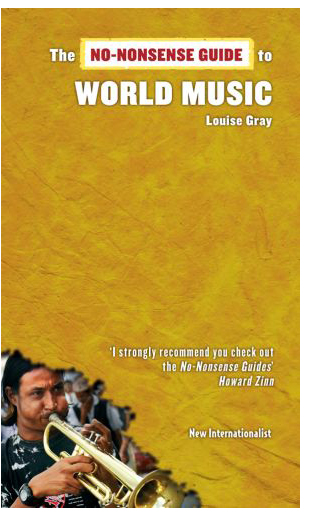 One fountainhead of primal musical energy, for example, is fado, Portugal’s peculiar genre of catharsis, channelling deep melancholy and profound desire into soul-shaking words and sound.

Greece’s rembetika is the musical backdrop of brothels, violent fights, drug abuse, drunkenness, and the criminal dregs of society. It is a music of futility and hopelessness, of pride taken in devilry, of eating, drinking, and making merry in view of an imminent mortality.

Sound familiar? American blues music shares the same agenda and context and is in itself another deep source of creative ferment on the world stage, with repercussions reaching into myriad genres, its mythos, crossroads and all, now an integral part of the modern psyche.

With these and a number of other international examples Gray shows us the kinds of changes a musical genre can take as it travels outward into other cultures. Eventually the fervent aura dies and you end up with commercial canned goods, but the path there is exciting and multi-faceted. And if you can reach back far enough in time you’ll find the place where that allegedly primal genre was itself the product of a mix of other cultures and styles.

This book is part of the series of No-Nonsense Guides (put out by Between the Lines) that encompass the subjects Globalization, Human Rights, Fair Trade, and Democracy, among many other worthy topics. If this music guide is an indication, these books represent a high standard in insightful journalism. Especially cogent is Gray’s analysis of our search for authenticity in music.

The No-Nonsense Guide to World Music manifests seven of The Mindful Bard’s criteria for books well worth reading: 1) it confronts existing injustices; 2) it gives me tools that can help me become a better artist; 3) it displays an engagement with and compassionate response to suffering; 4) it inspires an awareness of the sanctity of creation; 5) it harmoniously unites art with social action, saving me from both seclusion in an ivory tower and slavery to someone else’s political agenda; 6) it stimulates my mind; and 7) it poses and admirably responds to questions which have a direct bearing on my view of existence.