FREDERICTON (CUP) ? Atlantic Canada is steadily becoming more culturally diverse as international enrolment numbers are on their way up at universities in the region.

Despite high supplemental fees and the cost of travel, many international students are still choosing to come and study in Canada, largely due to the efforts of recruiters.

That’s how Danielle Bodie, a student from Nassau in the Bahamas, made it to St. Thomas University in Fredericton, N.B.

?I was at a school college fair, and at that time I was like, ?OK, I want to do journalism, but where do I go??? Bodie recalls. ?The recruiter had a lot of information. I saw the campus and it was gorgeous. I was like, ?This is for me.??

?Our percentage of international students is close to 10 per cent,? he says. ?Some students are still getting visas, so they might be late.?

Peter Halpin, Executive Director of the Association of Atlantic Universities (AAU), says bringing more international students into the Atlantic Canadian landscape has a variety of benefits.

?First of all, international students really enhance the overall educational experience of all students, because of the ethnic and cultural diversity they bring to the campus,? he says. ?That really enhances the entire experience, not just for them, but for domestic students as well.?

He says the aging population of the region is also an important reason to focus on international students.

If recruitment efforts are extended into the international community, Atlantic universities will operate closer to capacity, says Halpin. He says that the region is currently home to approximately 6,500 international students between the four provinces.

?That number is expected to grow when official numbers are released on Oct. 1,? he says.

Universities across the region are doing their best to enhance that number. Asa Kachan, assistant vice president of enrolment management and registrar at Dalhousie University in Halifax, N.S. says the school had 1,334 international students as of September 4, up from last year’s 1,184.

?We have a lot of students from Asia, the Middle East, and the Caribbean,? she says, with students from a total of 110 different countries.

?That has an interesting and diverse impact on the academic experience here,? she says. ?The traditional local market is certainly changing due to the decrease in high school graduates.?

That gap is being partially filled with international students.

?Last year our total percentage of international students was just under eight per cent. It looks like both the true number and the percentage are increasing this year to about eight and a half per cent, and that fits in very nicely with our overall goal . . . to maintain our enrolment.? 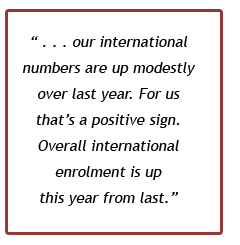 Acadia University in Wolfville, N.S. is also seeing an increase in the number of students from other countries.

Director of Communications Scott Roberts is hesitant to cite numbers since they are not yet official.

?What I can tell you,? he says, ?is our international numbers are up modestly over last year. For us That’s a positive sign. Overall international enrolment is up this year from last.?

New Brunswick, too, has been seeing a climb in the number of international students due to extensive recruitment efforts.

Kemale Pinar is in charge of international recruitment for both the Fredericton and Saint John campuses of the University of New Brunswick (UNB). She just returned from a 16-day trip to India. This was the first time for UNB to attend the tour, which is put on by the Council of International Schools (CIS).

Pinar says India usually yields graduate recruitments, but what UNB is looking for is a ?smaller but very strong undergraduate sector.?

Currently, about 40 students from India study at UNB’s two campuses, according to Pinar.

St. Thomas student Danielle Bodie has been studying in Canada for three years now, and she has enjoyed the experience.

?I’ve met a lot of nice people and made everlasting friendships with Canadians. Someone took me home for Thanksgiving my first year?we don’t celebrate it because we didn’t have any pilgrims,? she laughs.

?I think Canadians are the sweetest people.?