Articles
The Voice
Eras in Education – Love is a Battlefield: Less So in Sweden

September 1 marks the 70th anniversary of Hitler’s invasion of Poland and thus the start of World War II. Looking back at the tragedy and horror of this time, it is easy to forget that the people in the involved countries still lived their lives throughout the ordeal.

Life goes on, though bullets scream past. Women in particular, though deeply embedded in the war efforts of their respective nations, dealt with everyday issues such as work, mothering, domestic labour, and relationship maintenance. Young couples still fell in love, even as bombs shattered their homes.

Speaking sociologically, love is produced within the cultural context within which individuals live. As is common knowledge, the baby boomer generation sprouted from unions between North American soldiers and their “sweethearts,” who remained at home waiting for them, or their war brides whom they brought back from the lands of battle.

In post-WW II North America the public morals of love stated that sex was to occur only after marriage and even then without the use of birth control, which was illegal. In neutral Sweden, meanwhile, a poll taken in 1945 at the conclusion of the war found that a scant 18 per cent of citizens believed that couples should postpone intercourse until after marriage.

For young people in Sweden, marriage and reproduction were not as irrevocably tied to guilt-free sex. The singsong “first comes love, then comes marriage, then comes the baby in the baby carriage” was less stringently enforced. Swedish society’s progressive approach to sexuality would soon become ensconced in the Swedish educational system; sex ed became a mandatory course in 1955, even as in North American the stereotypical nuclear family (Mommy, Daddy, two and a half children, a golden retriever) was at its zenith.

Swedish women today live in a society that places a high value on learning. Extensive sex education translates, for instance, into fewer unexpected pregnancies. In the US the rate of teen pregnancy between the ages of 15 and 19 is pegged at 49 pregnancies per 1,000 women; this number is five times higher than in Sweden. Just as the baby boomers were beginning to, pardon the pun, make boom boom, women in Sweden were also enjoying sex–yet without the consequences of limitless pregnancies. Ironically, postwar Sweden developed one of the most generous welfare states in the world, providing plenty of daycare and long paid-maternity leave periods.

Sweden’s egalitarian leanings date at least as far back as a 13th century king named Birger Jarl who was the first monarch in Europe to outlaw rape and kidnapping. Today, “gender equality is a cornerstone of Swedish society.” In the education system, women are taught to fulfill themselves in whatever areas they are gifted; the Swedish state has never assumed that the only gift a woman can give her country is a brood of youngsters. She might prefer to be an airplane mechanic, an author, or an architect.

A sense of openness, and not dry biology delivered in liturgical style, pervades the Swedish approach to sex education. Sex is treated as something alive, something embodied in the hearts and minds of the pupils. Students interviewed “suggest that the most valued part of sex ed is not the facts, but the chance to discuss those facts and relate them to their own lives.” This relation of meaning to “intention and context” is what the 19th century sociologist Max Weber might have referred to as “verstehen,” or “understanding.” Swedish women may have gained greater self-confidence and independence as a result of this liberating environment of discussion and expression. 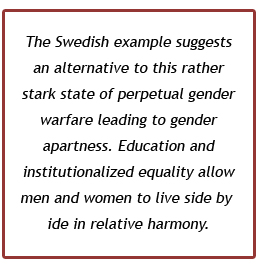 Understanding that sexual pleasure is a natural part of life may lead women to evaluate themselves and their bodies in healthier and more empowering ways. The feminist social theorist Kathleen Barry suggests that under patriarchy “girls learn that the locus of sexual power is male.” In other words, arousal is seen as a masculine phenomenon that the woman must learn to deftly and adeptly handle, curtail, or contain. Barry states that “as a young girl becomes aware of her own increasing sexual feelings, she learns to understand them primarily in the context of the boys sex drive.”

From this perspective, arousal tends to be equated with masculinity. Or, as many a mother taught her daughter in North America during the 1950s, “good girls don’t do that.” Implied in this statement is that good girls don’t feel that and, if they do, such a feeling should make them feel displaced from their abstemious virtuous “real” selves.

This desexualization of femininity places women in a weakened social position. Young women are expected to conform to what Barry calls “compulsory heterosexuality” (this can be taken in the social or sexual sense) which leads them to diminish “heretofore primary relationships with girl friends.” As a girl drifts apart from the solidarity of her female friends, leaving behind the patty cake circles of elementary school or lunchtime hallway gatherings of high school, “her own identity also assumes a secondary role and she grows into male identification.” She doesn’t just stand by her man; she comes to embody his aspirations and desires.

For another feminist theorist, Simone de Beauvoir, women become what she calls the Object by seeing themselves through the subjective Subject-position of man. To become Object is to occupy an identity devoid of one’s own feelings be they sensory, emotional, or intellectual. This status limits women’s autonomy and control both of their lives and their bodies. Patriarchy only permits women to take pleasure by being the object of man’s desire, thus feeling themselves as items graded and sought after just as items on a store shelf are pawed over and selected or bypassed.

What is inexcusable under patriarchy is for women to embody desire-for-itself. It is demanded of women that they embody a masochistic altruism; to live a life not their own and in forever in regard to others. Women are shepherded into the position of Other. De Beauvoir writes that “Otherness is a fundamental category of human thought.” From this premise it follows naturally that “liberation will come for women and humankind, when women develop a consciousness and culture that is uniquely theirs.”

The Swedish example suggests an alternative to this rather stark state of perpetual gender warfare leading to gender apartness. Education and institutionalized equality allow men and women to live side by side in relative harmony. Women have succeeded at careering and parenting simultaneously. What social conservatives might term “permissiveness” has given women greater control over their life outcomes.

Here in North America the derogatory epithet “slut” can be seen as an effort to deprive women of their sexuality. After all, in Sweden 70 years ago a woman engaging in premarital sex was simply claiming her prerogative.

We Love To Hear From You

The “War on Terror”: Sense and Nonsense