Articles
The Voice
In Conversation With . . . The Fast Romantics

The Fast Romantics are a Calgary rock band whose style is one part British invasion, one part indie rock, and eight parts tight, infectious fervour. They recently put out a self-titled debut album (available on iTunes) and are currently touring Canada.

Lyricist and lead singer Matthew Angus recently spoke with Wanda Waterman St. Louis; the following are notes from their conversation.

Where Did That Sound Come From?

Most of us were brought up on mod rock–the Beatles, the Kinks, and those kinds of bands. Then later on The Clash really hit us. Three of us were in a band before called The Mood and that band was really serious because we were really into Radiohead. I still am; I love Radiohead and I think we all do but back then we really wanted to be Radiohead, really brooding and melancholy.

After we made a record we took a break and looked at it and thought, That’s not really us. So we redeveloped ourselves.

I think at one point we had a real aversion to being pop. The word pop really scared us. Then we realized there’s nothing wrong with the word pop and we wanted to take the word back. Pop used to mean The Beatles.

I don’t think there is a typical rehearsal. They last a long time and often alcohol is involved. It’s not like it’s a big party; we want to be sure that we get good. There’ve been times that we’ve been pretty loose. We’ve got a nice balance between getting down to business and working out songs and just jamming out funny songs that never see the light of day.

If you’re a real musician you realize you’re going to be improving until the day you’re dead. We just thank God every day that we can do this, because there’s really nothing better than getting together for four hours a day and making music.

Our audience is everyone. Yesterday where we played there were 90-year-old couples sitting and eating sandwiches. We expected them to plug their ears and 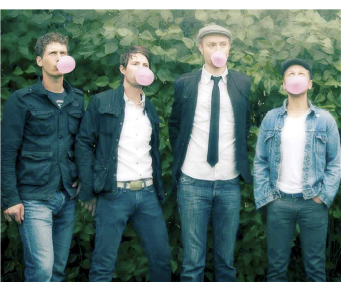 leave but they stuck around the whole time. We get a lot of kids, even underage. The twenties indie scene is really supportive, and their parents even like us. At our shows there are adults with real jobs. It’s kind of cool.

We don’t seem to offend anybody. They say if you’re making good art you have to be offending somebody, and I know for a fact that a lot of people hate us, but there’s no one demographic that hates us.

My mother’s a piano teacher and she had me into piano lessons at about age three. I’m self-taught on the guitar. Everyone in the band has a really good musical background.

My mom was constantly playing Abbey Road. And she had that single “Hey Jude” that I would play over and over. My parents were also into The Rolling Stones, Bob Dylan. The four of us all have very musical parents and grew up hearing music all the time.

I’m the lyricist for the group. I write tons. At one point I was even trying to write books. Matt and I are both really into fiction and I think that plays a role in our creativity. Kurt Vonnegut is a huge influence on both of us. We were thinking of calling our band The Pluto Gang, which is a reference from Breakfast of Champions. Vonnegut wrote in a very musical way, I think. He wasn’t one of those over-the-top, over-intelligent writers. He had this really human narrative.

They say artists are supposed to be these dark, moody, whiny people. But we find that when we’re in our depressive, dark moments it’s really hard to write music. The best condition for creativity is happiness. Even our darker songs are probably written while we’re really happy, because then it’s easy to create and we don’t come off sounding contrived.

I wouldn’t call myself religious but I’m pretty political. Most of my views are leftist and people label me a communist. But sometimes I’ll have a view and go, Holy crap, that’s really right-wing of me. I don’t think everyone should be cut and dried.