Jacqueline Chant’s been in constant pain since she was nine years old, but she hasn’t let it stop her from living her life. She’s backpacked through Europe, climbed mountains, ridden horseback, been skiing, worked two jobs at once, and volunteered extensively. Now, She’s overcoming another hurdle: completing her education.

A student for two years in Athabasca University’s Bachelor of Management program, Jacqueline chose AU because its flexibility worked well with her medical conditions. Fifteen years ago, she was diagnosed with fibromyalgia, a condition she says causes ?widespread musculoskeletal pain and fatigue.

?The simplest way of thinking of it is an imbalance of brain chemicals,? Jacqueline explains. ?[It] means that I have pain in every part of my body, from my muscles to my ligaments to my tendons . . . I ache all over, 24 hours a day, seven days a week.? She also has Ehlers-Danlos Syndrome (EDS), which causes super-mobility of the joints in addition to pain.

?I have it under a bit better control now,? she says. She credits her family for raising her to be strong. ?My family has always had . . . the ?go-getter? sort of attitude,? she says. ?We were always busy with something’skiing, triathlons, volunteering, riding horses?and I wanted to be able to do all that.?

She’s carried that same attitude to her pain management. ?The best method for treating it is what is called a multi-disciplinary approach . . . finding the right medication, ensuring you are taking care of your soul/spirit . . . eating healthy . . . and exercis[ing],? Jacqueline says. And she tries to stay active. ?I bike . . . and am hoping to get back into cross-country skiing in the fall,? she says. It’s all a question of balance.

Part of the difficulty is her inability to predict when the pain will be so great as to interfere with her daily activities. This was particularly a problem when she moved from distance-based high school to traditional college several years ago.

?I wanted to be around people,? she says. ?I like meeting people, seeing things.? She did two years there, but trying to do too much set her back. ?I was working . . . at one or two places and . . . volunteering at one or two places,? she explains. ?I crashed pretty hard, so it took a while to get back up after that.?

Because of her need to change her day-to-day routine according to how She’s feeling, studying via distance has been a good fit for Jacqueline.

?If I have a rough night . . . I don’t have to go to classes, get notes . . . or explain to people why I missed the group meeting,? she says. ?I [can] do my courses when I [feel] okay to do my courses.? It’s made working on her degree much easier. ?Having the ability to contact my [professors and tutors] when I need to, or hand in assignments when I can handle it, makes a world of difference,? she says.

AU has also given her the ability to take school with her when she travels, something particularly important since she and her husband spent time in the United States for his work. ?I [was there] on a dependent visa, so I [couldn’t] go to school,? she points out. She’s now back in Alberta, and is grateful she didn’t need to change schools in conjunction with the move. 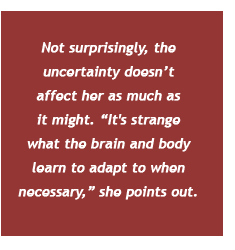 Jacqueline does miss the social aspect of a bricks-and-mortar school, and the lack of socialization was especially difficult when she moved to a new city where she and her husband knew few people. But although distance learning can be isolating at times, it doesn’t have to be, she says. ?It [is] easy sometimes to just end up being in the apartment a lot,? Jacqueline admits. ?I work hard to make sure that I get socialization outside of home.? Even something as simple as piano lessons or joining a meditation group has helped. ?Sometimes It’s about having acquaintances or being recognized,? she says.

On the other hand, distance learning has allowed her to juggle school while still participating in activities that are important to her?like yoga, meditation, and volunteering. Her volunteer work as a tutor for disadvantaged kids has brought its own benefits. ?[It] brought to light the fact that I was happiest working with kids,? Jacqueline says.

She’s planning to begin a degree in social work after her management degree is completed. In particular, She’s interested in the University of Victoria’s Bachelor of Social Work, which is a partially distance-based program. She’s also considering similar programs at more local universities within Alberta.

In the meantime, Jacqueline’s continuing to develop the skills she’ll need for this sensitive field. ?I have a long ways to go . . . and a lot to learn,? she says. ?I think . . . I wouldn’t have been ready mentally or emotionally to do a social work degree prior to now.?

Her volunteer work has given her some deep perspectives on what it means to work with disadvantaged children. ?To work with kids . . . a person has to be able to know that . . . nothing is personal,? she points out. ?You have to be able to separate [your work] from your life . . . not take it home.?

For example, Jacqueline says, ?if you have a work period where it seems you are really advancing with the kid, and then the next time they don’t talk to you, it’s not about you.? You also need a sense of empathy??underprivileged kids can go through more in their childhood than anyone could imagine,? she says?but an understanding that ?they aren’t meant to be fixed.?

Although Jacqueline plans to graduate in December 2010, She’s keeping an open mind. ?If . . . life happens . . . then I [will still] have a bona fide degree, which might make it easier to find work,? she says. ?I can always work for a while then go back to school.?

Not surprisingly, the uncertainty doesn’t affect her as much as it might. ?It’s strange what the brain and body learn to adapt to when necessary,? she points out. ?Life is tough, but I’m tougher!?