Features
The Voice
Pages – The Haunted: A Social History of Ghosts 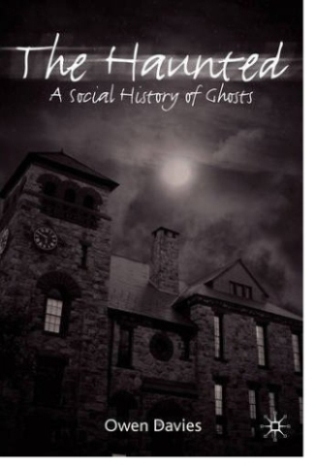 The days are growing shorter and shadows are growing longer. You feel a sudden and distinct chill in the air. Is it simply winter’s approach that makes you shiver, or are the spirits of the dead looking over your shoulder? Is it the rustling of autumn’s fallen leaves you hear, or the footsteps of the long-departed?

Why is the ancient and irrational fear that the dead return to haunt the living still part of our supposedly modern, scientific, and rational society? Perhaps the answer can be traced to our close ties with England, a ?ghost ridden? nation that according to historian Owen Davies has a ?love affair with ghosts.?

In The Haunted: A Social History of Ghosts, Davies, a University of Hertfordshire historian, examines ghosts in English history from the Middle Ages up to and including the popular ghost investigations seen on television today. Davies has also written extensively about witches, another Halloween staple, but?with the exception of parents who shield their children from Harry Potter books and films?belief in their power belongs to an irrational and superstitious chapter in human history.

Ghosts, however, continue to haunt us. Ghost stories fill shelves in libraries and bookstores, and ghostly themes abound on television, from the fictional Ghost Whisperer to the reality-based Medium in the US and the popular paranormal investigators of Most Haunted in Britain.

Even in the age of rationalism and science, ghosts are a subject that provides enduring fear and fascination. Rather than presenting readers with yet another collection of ghost stories, however, or attempting to determine whether or not ghosts actually exist, Davies examines the ways in which representations and explanations of ghostly phenomena have changed over time.

As Davies demonstrates, the notion that the spirits of the dead return to haunt the living is a belief that refuses to die. In the Reformation it was presumed that the Protestant rejection of the Catholic doctrine of purgatory would bring an end to ghost-belief. When Protestants continued to see ghosts, the ghostly apparitions were then ascribed to satanic deceptions.

Not only religion, but the fields of philosophy, natural science, psychiatry, and physiology have all contributed to the debate over the existence of ghosts and the manner in which these sightings were understood. Nor have ghosts been left behind in the computer age: technology assists ghost hunters in their investigations while the Internet links ghost enthusiasts around the world.

Though we might assume that the spirits of the dead, operating outside the time constraints of the living, have always been consistent in their behaviours and manifestations, nothing could be further from the truth. Stone-throwing, once a popular activity of English poltergeists, appears to have gone out of style, and white-sheeted apparitions?reflecting the burial practices of the day?now merely haunt doorsteps at Halloween. 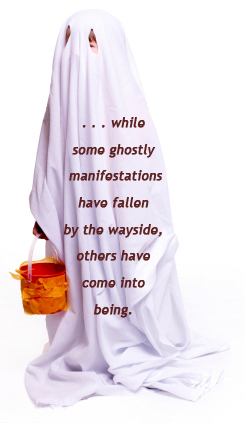 And while some ghostly manifestations have fallen by the wayside, others have come into being. Ghosts of Roman soldiers are only a relatively recent phenomenon, likely the product of a century and a half of improved public knowledge of history and the popularity of films portraying historical subject matter.

Davies covers a great deal of ground, yet there are issues that would have been interesting to explore in more detail. Davies relates the frequent sightings of ghostly nuns and monks to the fact that they can easily be recognized by their attire.

Given that religious controversy is a theme in Davies’s book, however, it is surprising that he does not have more to say about the English preoccupation with such apparitions. It is clear that the Catholic clergy still haunt the English countryside. Do these frequent sightings suggest that English Protestants have some anxiety concerning their Catholic past? After all, the English Reformation was often a rather bloody affair.

Although ghost manifestations are often associated with sudden, violent, and horrific deaths, there must be cultural factors that determine which specific deaths will be memorialized in this way. In his examination of television’s role in the debate over the reality of ghosts, for example, Davies refers to a 1967 BBC investigation of an alleged haunting stemming from a double murder that took place during the Second World War.

Yet Davies makes no mention of any ghosts associated with the thousands of civilian deaths from the German bombing of English cities during the war. Does this mean that ghostly apparitions stemming from these larger-scale horrific events are excluded, so far, from popular English folklore?

Might ghost stories based upon modern catastrophes be seen as trivializing these events? Are these events, for which there are still living witnesses, simply too recent and too raw to be memorialized by ghost sightings? Does the need to memorialize such events in the form of ghostly sightings become relevant only when there are no living witnesses left? Or do major tragedies tend to spawn ghost manifestations when society feels that the dead were not been properly mourned? Hopefully Davies and other social historians will, at some point in the future, cast some light into these dark corners.

Davies has written a highly readable and fascinating social-historical work on ghost phenomena. This is a balanced, sober, and analytical?though entertaining and at times even humorous?look at English ghosts from the medieval age up until the present. The Haunted will be available in paperback on October 27, just in time for Halloween.