Articles
The Voice
In Conversation With . . . Chris Smith, Part II

Chris Smith is a Scottish neoclassical composer, a career he embraced after having served as a drummer for a number of major rock bands. His exquisite performances and the beautifully crafted music videos that accompany his music have appeared on a number of television networks.

He recently put out his second album, Piano Passion and Middle Age Angst, reviewed in The Voice last week.

Recently he took the time to talk with Wanda Waterman St. Louis; this is the second half of the interview.

I remember the first really big gig I played with Dougie MacLean. The venue was Edinburgh Castle, to an audience of ten thousand. The castle was superbly lit as the backdrop to the stage, and the atmosphere was electric. The PA was over 100,000 watts with 50 huge cabinets per side. Motorized television cameras darted on high-speed wires suspended above the crowd. When we were announced the crowd went wild?the noise was deafening. I remember feeling like a thousand volts of electricity were rushing through my veins.

There have been so many great gigs. I really enjoy travelling. In 1996 I did some gigs in Russia with guitar looper David Allison. As guests of the government we were looked after by the mayor’s office, and each day David and I were obliged to attend social functions organized by that office. There was a serious drinking culture there?champagne breakfasts, carafes of vodka with lunch, bottles of cognac with dinner, and more champagne in the sauna with supper.

One day we were taken to the local pedagogical institute where we were initiated as Cossacks. This involved drinking a half pint of neat vodka in one go, kissing all of the girls in the room (around 30 of them), and then hurdling an obstacle. After performing well I was given my Cossack boots, which unfortunately were two sizes too big.

Heavy drinking ensued and eventually David and I made our way across the city by foot to the local television studio where we were to be interviewed that evening with the aid of an interpreter. They asked who I had played with in my career. I explained that I had played and recorded with Nazareth. Nazareth, unknown to me, was more famous than the Beatles in Russia. To this day I have no idea what was lost in translation, but the following night at the jazz club 300 rockers in biker jackets turned up at our gig to see Nazareth. 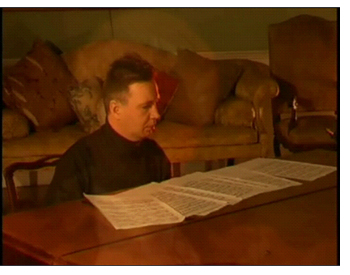 I toured in the States regularly over a period of five years playing drums for Dougie MacLean. One of the most mesmerizing gigs was the Telluride Bluegrass Festival in Colorado. We played to around 20 thousand people in a box canyon that rose up to 14,500 feet. We had to have oxygen on stage to keep lucid. Other artists on the bill included Emmylou Harris and Nancy Griffiths.

The first video was Fantasy. After composing my first piano concerto I set about trying to hire an orchestra to record it for me. I couldn’t find one orchestra in Britain that was prepared to even listen to it. The head of a prevalent Scottish orchestra I took out to dinner told me he thought I was ?a destructive aberration? and that he would certainly not entertain the prospect of recording anything of mine.

I told him that I understood it might be a little peculiar for a person with no musical training to write a piano concerto, but why ?destructive?? He told me I was a terrible example to those who sought classical music education and that I shouldn’t be able to compose the way I do.

I sent the composition to Rusty Holloway, leader of The Studio Orchestra at the University of Tennessee, who took on the recording of the project without hesitation. I filmed half of the video in the magnificent ballroom of Kinross House on the banks of Loch Leven and the other half in Knoxville. In this video I wanted to portray the idea of a pianist being helped by the ghost of a long-dead composer.

Consolation is my latest video. It was shot by Ewan and Alasdair Meldrum, professional filmmakers from Edinburgh (Scotland’s capital). They spent a year in the Scottish mountains time-lapsing the astounding beauty of the Highlands.

The Proper Conditions for Creative Output

I live in a lovely rural Perthshire village. I have a downstairs living room that I use as my studio. I crave solitude and silence but rarely get it, being the father of a nine-year-old daughter. I love red wine (too much), especially old French like Château Margaux and Spanish Rioja. Wine certainly does not help the compositional process.

Composing is usually a series of tragedies punctuated by the occasional success. I delete most of my ideas. I write using a piano and recording software called Cubase. With Cubase you can draw notes on the screen with a pen and give them a sound (piano, strings etc.) When composing is going well It’s very fast and I can complete a piece in an evening.

I think it was Bill Wyman of the Rolling Stones who said he didn’t write anything, he just pulled ideas from the ether. I have had many experiences like this, when I have virtually no recollection of writing a completed piece. Generally, in order to succeed there has to be an emotional charge. My best pieces originated from great personal sadness.

In Conversation With . . . Chris Smith, Part I