Articles
The Voice
In Conversation With . . . Patrick Brealey

Patrick Brealey is a Toronto-based singer-songwriter whose fountainheads of musical inspiration include bluegrass, blues, and country music. Mercury in Songbirds, his latest album with The Knives on the Boompa label, is a set of roots-influenced songs laced with irony and dark humour while managing to be fun to listen to. At his shows he invites fans to savour his own homemade pickles and preserves.

Recently Patrick took the time to talk with Wanda Waterman St. Louis about himself and his music.

I grew up in the foggy forest of North Vancouver. I started on the saxophone when I was 11 and then went on to piano. I wasn’t particularly good at either. By the time I was 16 I was a little tired of playing classical music and stopped taking lessons. Then for some reason I ended up playing every day, which was better in a way because I ended up getting a little bit scattered in terms of my learning curve.

I ended up taking lessons in jazz piano later on. When I stopped taking those lessons and branched off on my own again I ended up playing some country but mainly jazz. I had a band of my own in high school and sort of picked up guitar along the way.

Writing music in roots styles is becoming so popular that where it started and what it evolved into are two different things. It started with western swing and bluegrass and eventually turned into country music, which was frowned on for a while (perhaps by the disco set). It’s taken a lot of twists and turns. Now country music has some really great songs by some really great artists; the cream sort of rises to the top. 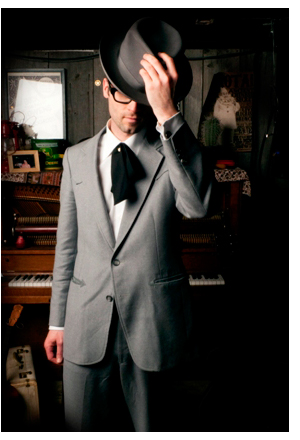 I definitely love to laugh but I don’t want to be Weird Al. I guess there’s a difference between being overtly jokey and using the darker side of humour. I would rather people enjoyed listening to the song, and if they choose to look deeper into the lyrics, great, but I don’t want the music suffering for the lyrics.

Being busy helps me to be more creative. It often takes me a while to write music. If I write a song about breakups I usually write it long after this has occurred. I don’t know if there are conditions. Usually a spark comes when I’m doing something else. Not too many of my songs are autobiographical.

You do have to deal with grieving even though you don’t want to.

I’ve been delving into bluegrass a bit. Bluegrass is a relatively new thing for me to be listening to but a couple of the guys I play with are really deep into it. There’s such a breadth of it even though everybody admits that all the songs kind of sound the same. It’s a genre that has a distinct feel and sound.

In Bob Dylan Chronicles, his autobiography, he talks very plainly about his experiences, not only as a personality but also as a musician. He didn’t ever really want to front any causes. At one point in ?66 or ?67 he moved to Woodstock, New York.

He had people pounding on his door wanting him to come and lead the charge and he was recovering from an accident and just wanted to raise his family. He just wanted to be a person.

I read when I’m travelling. I remember reading A Hundred Years of Solitude while travelling through Europe and I wonder if the book would have meant the same to me had I been reading it at home. But there was a whimsical sense to the book and when You’re travelling you have that sense of whimsy anyway.

In Conversation With . . . Gabi Epstein