Columns
The Voice
The Mindful Bard – Taking Root: The Vision of Wangari Maathai

Planting Trees Down Both Sides of the Muddy Road to Freedom

?If a man walks in the woods for love of them half of each day, he is in danger of being regarded as a loafer. But if he spends his days as a speculator, shearing off those woods and making the earth bald before her time, he is deemed an industrious and enterprising citizen.?

Taking Root begins with the rainbowed, sun-dappled scene of a wading girl trying to hand-scoop frog eggs from a sparkling spring.

This girl will grow up to win the Nobel Prize, but right now she thinks the frog eggs are glass beads; she wants to wear them around her neck.

Above her head are the snaking branches of an old fig tree. She is not to gather firewood from this tree, her mother says, because it is a tree of God.

Halfway through this girl’s life the frog eggs disappear from the spring. God’s house is now the church and the fig tree is cut down. The spring dries up. The forest is cleared. The villagers no longer use their land to grow their own food; they’ve acquiesced to the government?and to recent colonial history?by using every inch of acreage for the more lucrative crops of coffee and tea. 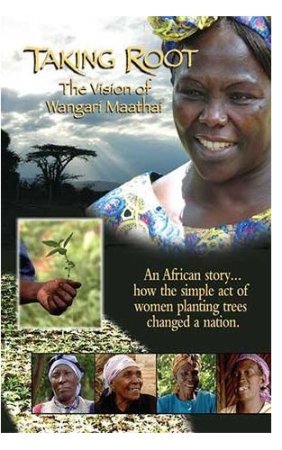 In short, British colonialism has reached its long, hooked talons into Africa and stolen the natural sweetness of this child’s life. Later on, as an American-educated adult, she musters the support of local women to find a way to bring the sweetness back. Her fight centres on the reforesting of now barren land.

In 1977 Wangari Maathai founded the Green Belt Movement in Kenya. She began by lobbying agricultural authorities to teach the women how to plant trees. Maathai was wise enough to reject conventional Western aid models, recognizing that if the people were not themselves invested in the process the project would die. Instead of giving the women seeds she got them to collect the native seeds from the ground and propagate them themselves, offering a stipend of four cents for every tree that survived.

Why plant trees? Trees clean the water and air and hold the soil together. They allow water to percolate down to the reservoirs and back up through the tree roots.

When the trees reach maturity the springs return. The women build their own homes and outbuildings from the wood of the trees they planted. They forego the starchy, nutritionally void foods that money can buy and learn once more to grow food for their families. They and their children are noticeably healthier.

More than just restoring the natural surroundings, the tree planting leads to years of political struggle during which Maathai is threatened, harassed, jailed, beaten, and publicly denounced.

This film intersperses Kenyan history with the Maathai account, leading up to where, in spite of repeated squelchings, Maathai’s network of influence is proven vital in bringing multi-party elections to Kenya and finally removing the dictatorial President Moi from power.

This is not just a story of environmental destruction and renewal. It’s the story of the freedom struggle of a people who recognize and proclaim that their birthright, their freedoms, and their identities are rooted in the earth.

Taking Root manifests five of The Mindful Bard’s criteria for films well worth seeing: 1) it confronts existing injustices; 2) it renews my enthusiasm for positive social action; 3) it gives me tools enabling me to respond with compassion and efficacy to the suffering around me; 4) it displays an engagement with and compassionate response to suffering; and 5) it inspires an awareness of the sanctity of creation.