Articles
The Voice
In Conversation With . . . We Are the City

We Are the City is an indie rock band from Kelowna, BC, who put up an online donations page to successfully raise enough money to record their latest album, In a Quiet World. Their music is known for being a delightful experiment in blended influences, grounded in a deep spirituality.

CAYNE: I grew up in Westbank, lived in one house my whole life, and still live there to this day. I loved Pokémon cards?I literally caught them all. At one point I had five Charizards, something I’m still proud about. I hated piano lessons.

DAVID: I loved skateboarding as a kid. Any sport really. I was a pretty cool kid, almost the complete opposite of me now.

ANDREW: I lived in Peachland and was really into top 40 music during elementary school. I loved the Backstreet Boys and did an air band at my school every year and each year was a different BSB song. I loved Star Wars; I would rent crates of books from the library on Star Wars.

CAYNE: I had piano lessons, which again, I hated. I took them until I was 14.

DAVID: I’ve had no lessons, but I studied the first Back to the Future, when Marty plays ?Johnny B. Goode.? I later realized that he was just acting and not really playing.

ANDREW: I was in a screamo band when I was in middle school. Black hair, tight pants, all of it. 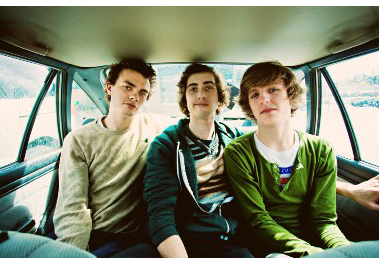 ANDREW: We can all agree that a local Kelowna band completely inspired us. They were called AlphaBaby (now known as Yukon Blonde) and every show that we went to blew our minds. They had us mesmerized.

DAVID: A few years ago, when we started the band, Coldplay’s A Rush of Blood to the Head and Muse’s Absolution were inspirational. But now I find inspiration with music just in general.

CAYNE: David and I have similar influences. A pivotal band for me was Pink Floyd, all the albums. I started listening to them around the same time I started to genuinely enjoy playing music.

This week?and all of the tour?has been a real potpourri of music. Our official tour song is ?World Waits? by Jeremy Enigk, but we’ve been filling our heads with Said The Whale’s new album Islands Disappear, Yukon Blonde’s new EP Everything in Everyway, Kingdom Cloud’s EP Jubilee, and way too many others to mention.

ANDREW: Cayne started out on guitar, David on bass. Then Andy joined the band and after loads of practicing we went from a more instrumental style of music to what we are now.

The name actually came from a verse in the Bible that goes ?a city on a hill cannot be hidden,? which basically means that one cannot hide the light of God if they have it inside.

It’s really hard actually; one of us will come to the table with an idea, whether it be a verse, melody, chord progression, or a lyric, and from there we’ll simply try everything. Every suggestion. It’s a gruelling process, having three people with very different thoughts in one room trying to finish a song. It seems like it takes forever at the time, but it works.

We walk in to find that our gear has been defecated on by Cayne’s dog. After cleaning, we’ll practice a few songs to tighten up a set if we have an upcoming show. We try to get in as much writing as we can but lately we’ve had a lot of shows so not much has been done in that department.

You could call us Christian guys. Our spirituality has a huge impact on our music and It’s something that really pushes us as a band.

To be honest, That’s a tough, tough question. We’ve all fallen in love with different cities, and each show has been spectacular in its own way. There’s just so much love across Canada. And so much to love.