Features
The Voice
Better the World – Making a Difference, One Click at a Time

It’s an interesting conundrum of student life. You’re broadening your understanding of the world, becoming more aware of the issues facing it and (hopefully) looking for ways to make a difference.

Yet for many students, finding the time to volunteer can be hard. And with money being spent on books and tuition, there’s rarely such a thing as spare cash.

That’s where Better the World comes in. It’s a website that lets you raise money for worthwhile causes around the globe?just by surfing the web. Every time you go online, you can help the Lewa Wildlife Conservatory preserve Mount Kenya’s rich biodiversity. Or assist youth volunteers working to provide clean water. Or support War Child Canada as they provide education for children in Darfur and The Democratic Republic of Congo. Or . . .

Kristen Petri is part of the Better the World team, and she explains how the project got started.

?The company was founded in May 2008 and the website was launched February 12, 2009,? says Kristen. ?It was founded on research that was begun at the Richard Ivey School of Business, where three of the founders were taking their EMBA. Essentially it started out as a school project! All the founders (and others who work here) have a history of working and volunteering with charities?they all care about making the world a better place.?

So who can get involved with Better the World? As Kristen explains, ?Anyone with access to the Internet! It’s great for people who are already donating to charity but want to give more, and also for people who don’t have the cash to donate (in other words, great for students!)?

But how, exactly, does it work? It’s as easy as logging on. Once you’ve created a username and password, there are several ways to help the cause of your choice.

The main one is to use the Better the World sidebar. It’s a simple plugin for Firefox or Internet Explorer that displays ads for charities and socially responsible companies while You’re surfing the Net. A couple of examples are Red Dot Campaign (a campaign aimed at reducing the waste from junk mail) and Orenda (a consulting firm that promotes corporate social responsibility). 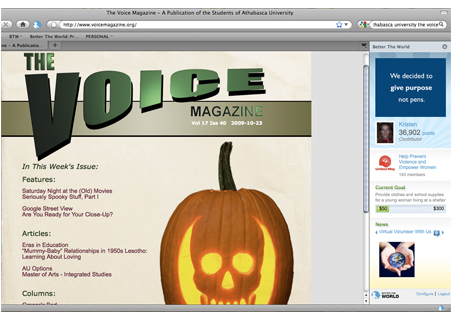 Companies pay to have their ads displayed in the sidebar, much like they might pay a newspaper to publish an ad. But with Better the World, 90 per cent of that money is allocated to the charity the member has chosen.

You can also add a widget to your own blog or webpage, put a badge on your Facebook page to tell your friends about the cause You’re supporting, link to your Twitter account, and more. There are also monthly contests, like The Final 4, which lets the winning school choose a charity to donate as much as four thousand dollars to.

Still, there are plenty of scammers out there on the Internet. How do users know that the funds they help raise will actually make it into the hands of the people who need it?

?Firstly,? explains Kristen, ?we work with many really well-known charities who have, of course, checked us out before coming on board! They wouldn’t work with us if they weren’t certain. Secondly, we are the first B Corporation in Canada, which means that we’ve gone through an extensive vetting process to ensure that we meet comprehensive and transparent social and environmental performance standards.? (You can read more about B Corporations here.)

Some of the charities involved with Better the World are The Canadian Foundation for AIDS Research (CANFAR), Habitat for Humanity, the children’s Miracle Network, and the Kids? Internet Safety Alliance. A full list of causes is available on the website.

And Better the World’s 90/10 policy also ensures that the money is going where it should. The policy means that ?90 per cent of the money goes directly to your charity (no other costs to the charity),? says Kristen, ?which is an amazingly low cost/earnings ratio for any fundraising format!?

Incredibly, it can take as little as $15 to make a big difference. That’s all it costs to fund one hour of research and support for clean water initiatives. And $25 lets War Child Canada provide milk powder to one family for three months, while $100 allows Trickle Up to help women ?take their first steps out of poverty, providing them with resources to build micro-enterprises.?

Better the World’s members have already been part of several success stories.

?If you look on our Impact page,? says Kristen, ?you can see the goals we’ve achieved.? Some of the successes of the past few months include providing two nights of shelter for a person in need; paying to send a child to school for a year; X-raying a child with a broken arm; buying milk to feed an orphaned rhino for a month; and providing counselling sessions to a woman escaping violence.

The Better the World community is well over five thousand members strong (and growing), and there are more developments on the horizon.

As Kristen explains, ?We are always working to develop new tools and methods that our members can [use to] raise money for charity in new and innovative ways! Currently we are working towards providing a search tool enabling people to raise money for charity, shopping (people can buy ethical products online and part of the proceeds go towards charities), and more social networking on the Better The World site so our members can interact and discuss more.?

For millions of people, the Internet has become an important part of their daily routine. They work, shop, chat, study, and play. Now, they can Better the World while they’re at it. 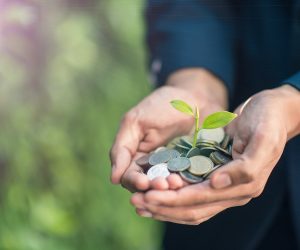 The Bank of You