Articles
The Voice
Eras in Education – Colonial and Modern Masquerades: School is in . . . Disguise 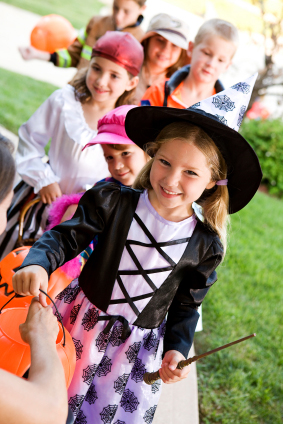 Be it at kindergarten or college, October 31 is one of the most anticipated dates on the calendar. From spending a whole school day eating candy and making arts and crafts, to an evening out trick-or-treating, toilet-papering houses, egging automobiles or partying, Halloween has something every student can be excited about. As an institution endorsed by schools and elders, Halloween combines individual rebellion with social solidarity.

The day releases tension from the daily grind of fitting into one’s prescribed social roles, roles taught and accentuated by the education process. I recall in elementary school us students running amok with sugar-fuelled excitement while the PA loudspeaker blared garish sound effects. They were piped into every classroom as though to remind us that the temporal authority had momentarily been usurped by the energy of the moment.

I remember one exasperated teacher attempting to deaden the cacophony of cats, witches, and moans by taping pieces of orange and black construction paper over the offending speaker. Most teachers seemed to relish Halloween, however. While allowing for a sense of individual expression by way of masquerade, the day also unites students through its unique ambiance.

Centuries ago, and in traditions carried forward to the present, trick-or-treating was an institution that served to foster community trust and to enforce social expectations. However, Halloween’s history and historical associations, despite being carried out by young people, are rarely discussed in class. It is possible that schoolteachers avoid the subject because of Halloween’s sketchy relation with Christianity (vis-à-vis all the witches, demons, ghosts, and devils involved), but similar activities in past eras reveal the importance of momentary lapses in social normalcy, particularly for school-age youngsters.

In one recent Philadelphia fifth grade classroom, a tradition known as ?mummering? was actually demonstrated during a Christmas pageant. Originating in the Old World and brought to Newfoundland in the early 17th century, the tradition saw young townsfolk disguise themselves and go door to door asking ?Any mummers ?lowed in?? Their outfits were as outlandish as possible; in the Philadelphia classroom this translated into one athletic-minded boy wearing a size 42 bra. Such gender reversals proved not to be a problem given the playful and only subtly subversive nature of mummering. The teacher noted that ?to my surprise, I did have boys dress up as girls and vice versa.? In the end, everyone goes back to ?normal,? perhaps with a renewed belief in exactly what normalcy entails for them.

Philadelphia itself has a history of mummering dating back to 1642, when Swedish immigrants would sing the following carol on neighbourhood doorsteps: ?Here we stand before your door/As we stood the year before/Give us whiskey; give us gin/Open the door and let us in.?

These mummers were dutifully rewarded with cakes and ale.

Meanwhile, in Newfoundland the song was of a somewhat darker nature. Mummers ?threatened the hosts with physical and sexual violence,? which it seemed the hosts could only avoid by successfully guessing their assailants? identities. If the guess was successful, the mummers removed their masks. If not, they simply left. No harm was ever done.

It seems that mummery was ?a way for community members to prove their trust and commitment to each other.? 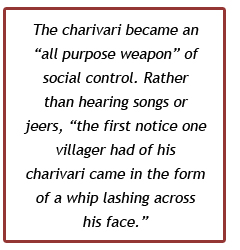 A century later, in 1837 Quebec (then called Lower Canada), high school-age youth of both sexes participated in a ritual known as the ?charivari.? A contemporary account of a charivari describes a troupe dressed as ?sailors, old men, Catholic priests? carrying a coffin to the door of ?any old gentleman? who had committed the social faux pas of taking a young wife. Standing outside the home of this ?invader of the laws of love and nature? the youths would bang pots and pans and shout a ?mock service? for the too-aged groom. If he invited them in for a drink or gave them money, they departed. If not, they returned nightly with a ?fresh ludicrous composition? that they would sing.

It seems that the charivari was a ?protectionist impulse of bachelordom.? However, the goals were at times more political, such as to protest a disliked English official, or religious, to condemn a convert to Protestantism. The charivari became an ?all purpose weapon? of social control. Rather than hearing songs or jeers, ?the first notice one villager had of his charivari came in the form of a whip lashing across his face.”

Trick-or-treating, mummering, and the charivari all bring to mind the Mannville, Alberta-born sociologist Erving Goffman. Goffman’s ?dramaturgy? of life is based around the fact that on a daily basis ?people perform for their social audiences.? Impressions are managed in order to convey a consistent identity. Only at a time such as Halloween is a ?Front,? consisting of ?items of expressive equipment,? altered or discarded.

In the Philadelphia classroom, for instance, the boy wearing a bra set aside his normal Front of basketball shoes, shorts, and T-shirt in order to shock the audience and produce ?a dramatic effect arising . . . from a scene that is presented.? For Goffman every social setting is a scene, making very real the well-known Shakespearean line ?All the world’s a stage.?

Halloween is one of the only times of year that the veil of normal dress and behaviour is lifted. Perhaps it would be more accurate to say that the social stipulations on what is acceptable are relaxed. For students, Halloween is a blessed relief from the tedium of the fall semester. Judging by the gusto with which many teachers embraced the holiday, it seems that October 31 was a welcome reprieve for instructors as well. In the end, student and instructor return to normal life and studies, refreshed from a day of carnival-like delirium.