Last week, we featured old movies where human monsters were the focus. This week, we’ll look at a different type of monster: the otherworldly creatures that might evoke sympathy, horror, or something in between. we’ll then end our spooky series with a smile by seeing what happens when humour and horror mix.

Early ?monster? movies were almost exclusively produced by Universal Pictures (they’re often referred to collectively as ?Universal monsters?). Both beloved, familiar characters and lesser-known creatures, these classic monsters seem to be united by a surprisingly sympathetic aspect. they’re frighteningly hideous, and they’re feared primarily for their appearance. Their behaviour is also monstrous, but their actions are often motivated by ignorance, misunderstanding, mistreatment, or even love and misguided passion. Frequently, there’s a whiff of tragedy in the air.

The most famous example is, of course, Frankenstein’s Monster (usually inaccurately referred to as ?Frankenstein,? the name of its creator) in 1931’s classic Frankenstein. The story is familiar to most: a scientist experimenting with raising the dead creates a monster out of dead body parts sewn together, brought to life by electrical stimulation. The Monster (played by Boris Karloff) strangles and drowns people, yet he’s not so much a killing machine as a creature who has learned to mistrust humans. The Monster is a bit of a tragic character: he’s almost like an overgrown child who doesn’t know his own strength. It’s not scary by modern standards, but Frankenstein?s influence on both horror films and popular culture make it a must-see.

Trivia: Much of the Monster’s ?look? is attributable to the legendary makeup expert Jack Pierce. To make Frankenstein’s Monster as accurate as possible, he consulted anatomical and surgical texts to determine how the skull would have been opened and then stitched back together to receive its new brain. The bolts on either side of the head were, of course, to conduct the electrical pulse that brought the Monster to life.

Similarly tragic, although slightly creepier, The Mummy?s (1932) bandaged monster actually appears in his familiar wrappings only in the pre-story. Boris Karloff also plays the titular mummy, the lovelorn ancient priest Im-Ho-Tep. Resurrected 10 years earlier by the reading of a spell, Im-Ho-Tep is now in pursuit of the spell-containing scroll in order to resurrect his long-lost love. His sacrifices of the past and belief that true love can overcome time and death give him a romantically sympathetic personality. However, his single-minded obsession with the woman he believes to be his reincarnated lover makes him a little too creepy for comfort. This, combined with the close-up shots of his dark-eyed, undead face, make this monster-drama a mildly thrilling Halloween experience.

Trivia: When King Tutankhamen’s tomb was opened in 1922, it created a fascination with all things Egyptian. Hoping to capitalize upon the public interest in both Egyptology and the growing horror genre, Universal Pictures sought a literary work or treatment that could be turned into an Egypt-themed horror film. The Mummy was the result. Note that the Mummy movies in the 1940s and 1950s were not sequels to the original, but completely different movies with different casts and characters.

The horribly disfigured Phantom from 1925’s The Phantom of the Opera also invites sympathy, but It’s pity mixed with horror. The film’s Phantom isn’t the suave charmer of the popular musical. The original novel on which the story was based is a horror thriller, and this silent film follows suit. A young opera singer, Christine, is coached by a mysterious ?Phantom? who demands her love in return. When the Phantom discovers that Christine has another lover, he loses his already tenuous hold on sanity. Although the lack of spoken dialogue makes it difficult to invest in the picture (especially for those familiar with the modern musical), It’s worth seeing just for the Phantom’s makeup. When he’s first unmasked, even modern viewers will jump in their seats. His despair when he realizes how much his face has horrified his love is tragic, but his manic behaviour and gleeful murderousness make him a little less than sympathetic. 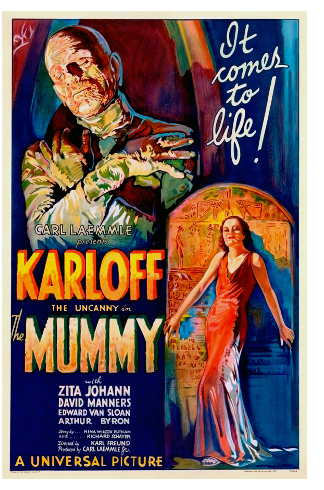 Trivia: You’ll notice that the Bal Masque scene is presented in early Technicolor; it stands out among the tinted black and white photography of the rest of the film. Film historians believe that more of the movie was originally in colour, but only the Bal Masque scene has survived.

Not all monsters have a sensitive side; many are horrifying to the core. One of the earliest examples is the German film Nosferatu?s (1922) Count Orlok (a thinly veiled imitation of Count Dracula). It’s another silent film, with grainy footage and overly dramatic acting. However, it packs a punch: amazingly, nearly 90 years later, this vampire tale is still scary. Although the written dialogue is weak, the film’s fantastic score, good use of shadows and lighting, and above all Count Orlok’s disturbing physical appearance create an eerie sense of horror.

Trivia: Nosferatu heavily copied from Bram Stoker’s Dracula, but its producers failed to obtain film rights to the novel. Stoker’s estate successfully sued for copyright infringement and obtained a court order requiring the destruction of all the film’s copies. Fortunately for art and cinema, some copies survived! It’s hard to believe that what is now considered one of the most influential horror films of all time was almost once lost.

If one creature intent on death and destruction could be menacing, how much more a whole crowd! Night of the Living Dead (1968) first introduced the concept of the modern zombie: flesh-eating, reanimated corpses solely bent on murder and mayhem. The plot is simple: several people barricade themselves in a house while marauding zombies attack. Although Night has its share of gruesome scenes (It’s not a kids? movie!), it relies less on its production values to create suspense; instead, it allows the horror outside the house, largely unseen, to create tension within. The elevation of suspense by television and radio broadcasts, the increasing panic of the characters, and the breakdown of interpersonal relationships contribute to the drama. There are countless theories as to the deeper meaning of the film?It’s often seen as heavily critiquing post-Vietnam America?but at Halloween, it should be enjoyed for the chilling horror film it is.

Trivia: Unlike most of the classic horror discussed here, Night of the Living Dead was an independent film directed and produced by three friends whose prior experience had been directing commercials. Its low operating budget meant very basic props and camera work, but this actually contributes to the ?I-was-there? realistic feel of the footage. Because the ending wasn’t Hollywood happily-ever-after, many distributors passed on the film, but the producers refused to back down and the movie was eventually screened as originally intended.

Not all monsters are frightening; in fact, some are downright funny. Spoofing monster and horror movies isn’t a modern invention, but began early on as the horror genre grew in popularity. An example is 1948’s Abbott and Costello Meet Frankenstein. It’s technically a horror film in its own right, but it 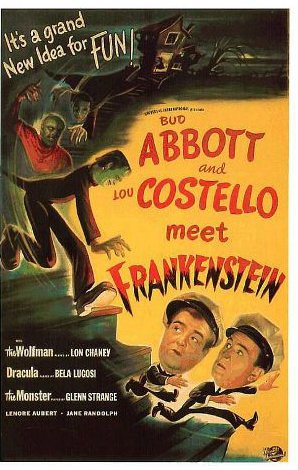 has a lot of humour thrown in. The comedians play baggage clerks who bungle the handling of two crates destined for a horror museum. Contents of the boxes: Dracula and Frankenstein’s Monster. The creatures escape to Dracula’s castle, where they join forces with Costello’s girlfriend in an attempt to recreate Frankenstein’s Monster. What follows is a zany caper?part Marx Brothers-style wit, part Three Stooges slapstick?as Abbott and Costello work with the Wolf Man to stop the evil plot. The hilarious ending even sets the stage for a sequel, Abbott and Costello Meet the Invisible Man (1951).

Trivia: Dracula is Bela Lugosi, who played the legendary vampire in the original Dracula film; the Wolf Man is played by the original Wolf Man star Lon Chaney, Jr. (son of the Lon Chaney who was the original Phantom of the Opera). Boris Karloff, the original Frankenstein’s Monster, was approached to reprise his role for this film, but declined. In fact, although Karloff was involved to a limited extent in the film’s promotion, he considered the movie to be an insult to the classic horror films and refused to see it.

Trivia: Frankenstein’s Monster is Peter Boyle, Raymond’s cranky dad from the TV show Everybody Loves Raymond. While filming, Boyle met his future wife, a reporter, on set. He asked her out while still in full makeup; would that make her the bride of Frankenstein?

The development of the horror film genre?from classic to cheesy to the modern slasher flick?can’t really be encompassed in a single article. There are countless other old horror movies worth watching: for example, Dracula (1931), The Wolf Man (1941), and The Birds (1963) are on many must-see lists. However, hopefully the films I’ve reviewed in this two-part series will serve as a springboard for further viewing enjoyment. Happy watching?and remember that old horror films need not be limited to October, but can be appreciated year-round!

1) I consider the era of modern film to have begun with 1972’s The Godfather.