Here’s what’s culturally significant about Sam Baker: he represents an anomalous, oft-silenced group of American voices?victims of terrorism who come out the other end of the dark tunnel embarking (albeit stumbling a little) on a journey toward deep, compassionate understanding of the human condition. Of these, Baker’s voice may be the most eloquent.

Mercy and Pretty World, the first two albums in the Baker trilogy, each contained songs that recalled Sam’s experience on a train in Peru when it was bombed by Shining Path guerrillas. In cotton I find no mention of this incident, yet Sam would be the first to admit he only became serious about writing after his long (and iffy) hospital recovery.

In an interview with Dan Forte for Wood and Steel Magazine Sam explains the change: ?It was an interesting time. Very introspective. The only thing that came in loud enough to really get through that haze or fog or internal trauma I was dealing with was the raw suffering of others.? 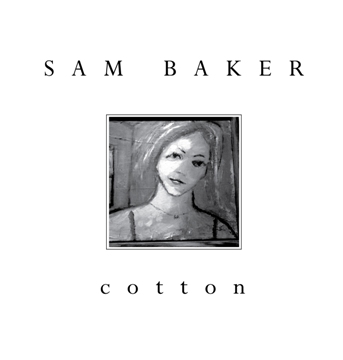 In all three albums he turned his trauma-hewn craft and deepened insights to the winnowing of personal observations, the commonest details infused with that gentle seriousness that results from a brutal encounter with mortality. Things once resisted are now accepted (the isolation, misery, and abiding dignity of marginalized peoples, for example), and things once unquestioned are now held to account (e.g., religion, relationships, old grudges).

Each of the three album covers in the trilogy has the same format, the same elegant white background punctuated with exquisite black and white photos. Inside each cover is a cryptic message illuminating whatever step Sam was on at the time. Mercy was inscribed with: Everyone is at the mercy of another one’s dream, a perceptive reflection on the anguish he must have felt in the wake of the explosion. Pretty World bore: How beautiful are these days, which, like the album, conveyed a sense of the sweet virtue infusing each privileged moment of life.

Cotton has: Think about forgiveness. What does this mean? Sam makes one direct reference to forgiveness in the song ?Snow,? in which the tanned Texan is trudging through a Boston winter and seeing the frozen cityscape as an externalization of the retention of bitterness.

As incredibly good as Mercy and Pretty World were, they simply foretold cotton, so far the best evidence of the blossoming of a refined consciousness.

There is a liveliness, a stretching in cotton that was latent in the first two albums. The accompaniment here is as poignant and lovely as ever but on this CD there’s more courage and verve?poetically, musically, and emotionally?and a greater willingness to face down the inner pain the ego tries to mask. As in the first two, cotton contains snippets of old Southern songs, lending a historic dimension and a sense of groundedness to Sam’s saint and sinner tales.

Sam has a halting vocal delivery that often makes his music sound more like a poetry reading than a musical performance. you’d think this would seem incongruous with a Texas drawl and country backup but his albums sound so artistically right that you’ll want to rescue them from the CD pile and stick them up on the shelf between Twain and Faulkner.

Sam began painting in January and several of his works, vivid expressionist portraits of characters Sam calls his ?friends,? grace the CD cover and liner booklet. He recently confessed that the paintings now populate his house, taking up space on the furniture. 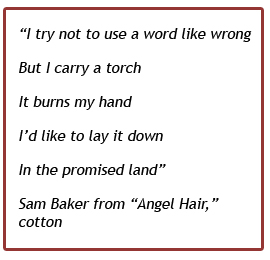 When asked if he understood why he’d started painting his answer was: ?No. Odd, I think. A prairie fire usually starts somewhere. A welder sparks dry grass. A trash burn gets away from an old man. I still don’t see the welder’s spark. don’t smell trash burning.?

It’s tempting for fans to guess at how much and in what way these songs are windows into Sam’s personal life, but this will just distract you from their beauty. And if you’ve heard the first two albums you’ll be ready to trust the integrity of Sam’s empathy.

These story-songs have the same calm-after-the-storm quality you find in Cormac McCarthy’s novels, a kind of oblique response to the question, After all this, what’s left? We might go on to ask, And what do we do with it? But such a question is redundant; what is left is love itself, requiring no justification, desiring no further end.

Cotton manifests eight of The Mindful Bard’s criteria for music well worth a listen: 1) it is authentic, original, and delightful; 2) it makes me want to be a better artist; 3) it gives me tools that help me improve my art; 4) it displays an engagement with and compassionate response to suffering; 5) it inspires an awareness of the sanctity of creation; 6) it is about attainment of the true self; 7) it provides respite from a sick and cruel world, a respite enabling me to renew myself for a return to mindful artistic endeavour; 8) it poses and admirably responds to questions having a direct bearing on my view of existence.