Articles
The Voice
In Conversation With . . . Alex Kajumulo, Part I

Alex Kajumulo is a Seattle-based recording artist and producer at Babukaju Records. His song ?Maza Africa? was a finalist in the 2007 International Songwriting Competition.

His songs and live performances are vibrant and joyful celebrations of love and justice. Kajumulo freely mixes musical genres in his songs and actively seeks collaborations with musicians all over the world.

He is currently getting ready for an African tour that will include stops in his home country, Tanzania. Recently he took the time to chat with Wanda Waterman St. Louis about his life and his music.

A Maple Leaf in the Tanzanian Bush

I became interested in music because I had an uncle who played the guitar. He was the only one who paid attention to me. He left Tanzania to come to university in Toronto. I didn’t know why but he left and never came back. After he left he sent me a T-shirt from Canada, with a Canadian flag. I was in the bush; I knew about Canada before I even knew about my own country.

My childhood was terrible. I was a product of gang rape. My mother was only 15. The people in our village in Tanzania didn’t believe she’d been raped, so she was punished. After that, she ran away and I was raised by my grandparents.

The people in the village called me ?the bastard kid.? The British had been there, and the Church, and they had made people feel that it was shameful to be born out of wedlock. Some people think that if you aren’t born the way You’re supposed to be born then you have no right to exist.

I grew up fighting for justice. I fought almost every day, but nobody gave me any credit. Because I was a bastard I was just a troublemaker. My grandfather died when I was 10 and then I was on my own. I had to fight to stay alive. 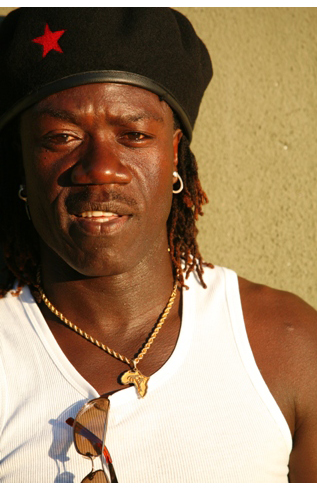 Before he died my grandfather said to me, ?Those people aren’t lying?you are a bastard. That’s reality. But if you give up on life you will prove them right. Prove to those people that they are wrong. If you have hands and feet and are not handicapped you can turn your life around. don’t sit and wait for other people to help you out.?

What I sing is real. I don’t pretend. I started singing about love and respect because That’s what I was looking for. I have to preach that or be a hypocrite.

When people complain, ?I need you for this!? I just say, ?No, you don’t?you can do that yourself.?

I like documentaries. I don’t watch movies; I think they’re a waste of time.

I really liked reading Abraham Lincoln’s biography. He had to fight hard to exist, and no matter what happened he kept moving. The only way to stop him was to kill him.