Features
The Voice
On the Hill – More Than One Way

?In Canada, men and women are equal under the law. Canada’s openness and generosity do not extend to barbaric cultural practices that tolerate spousal abuse, ?honour killings,? female genital mutilation, or other gender-based violence.?

So reads the new Citizenship and Immigration Canada study guide, Discover Canada: The Rights and Responsibilities of Citizenship.

Strong words that need to be said; especially when Canadian women still struggle for safety and equality every day. A 2002 report from the Canadian Research Institute for the Advancement of Women (CRIAW) notes that ?29% of Canadian women have been assaulted by a spouse,? while ?four out of five people murdered by their spouses are women murdered by men.?

The authors of the Discover Canada guide should be applauded for sending such a firm, unequivocal message. Yet there’s another message being sent by the Guide?one that reveals just how deeply ingrained the idea of women’s second-class status in this country remains.

In the early sections of the Guide, It’s understandable that the overwhelming glory of Canadian accomplishments falls to the men. Canadian women weren’t even considered ?persons? until 1929. Their opportunities for military victories, scientific breakthroughs, and sports milestones were pretty much non-existent. New Canadians studying the guide will see only a couple of notable women from our early history, such as Mary Ann (Shadd) Cary, the first black female editor and publisher in North America.

But what’s the message new Canadians will get about women’s role today? Sadly, that half the population is still relegated to a footnote. Take the Guide’s section on ?Modern Canada.? It’s a who’s who of artists and athletes, including Donovan Bailey, Terry Fox, Wayne Gretzky, Mark Tewksbury, and Rick Hansen. Chantal Petitclerc is the only woman in the group. The Canadian women’s 2002 and 2006 Olympic gold victories are notably absent, as are Hayley Wickenheiser (first woman to compete in a professional men’s hockey league) and Cindy Nicholas (first woman to complete a double crossing of the English Channel).

The Canadian Space Agency and Canadian astronauts also receive a mention, along with such notable male scientists as Gerhard Herzberg, John Polanyi, Sidney Altman, Richard E. Taylor, Michael Smith, and Bertram Brockhouse. Roberta Bondar, the first Canadian woman in space and the first neurologist in space, has apparently disappeared into the ether.

It’s ridiculous to think that every noteworthy Canadian will land a spot in a 62-page guide, especially one that covers everything from our justice system to how to register to vote. But even as the Discover Canada guide speaks out against physical abuse, it reinforces a more subversive?but no less damaging?message of inequality. Hopefully, That’s one lesson on Canadian culture our new citizens won’t learn. 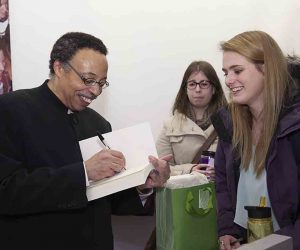