Wrap Your Chops ?Round This Stick o? Tea!

?Daddy said that love is just in songs
And dreams are just little bits of sleep.
Daddy said the blues’ll tag along
And love’s just a dream that doesn’t keep.?

Cynthia Sayer, from ?The Gift,? Attractions

One of the things that first impressed me about jazz banjoist Cynthia Sayer was the gal’s extreme coolness. Check her out here and note how solicitous she is toward her young nephew (not a bad musician either), who is playing the djembe. Such graciousness in a musician tends to nudge her into the Bard’s favour and warrant a good hard listen.

The jazz banjo (four strings, not five) has a history and culture behind it of which, generally speaking, only seasoned jazz junkies are cognizant, and It’s sometimes hard for the average listener to separate it from the five-string fingerpicking that has comprised the vast bulk of North American banjo music since Bill Monroe invented bluegrass music in the ?40s.

But as glorious and rich a genre as is bluegrass, there is so much more to the banjo than ?Orange Blossom Special.?

I usually only recommend albums that came out within the last 12 months but when Attractions was first released two years ago it fell many miles below the radar, and recently this New Orleans-style jazz album has begun to garner enough positive attention to bump it into the spotlight for the first time, which I think justifies treating it like a new release. Besides, It’s such a smokin? doobie of an album it deserves all the attention it can get.

Sayer’s band (which includes the inimitable Bucky Pizzarelli on guitar) is very much attuned to her aesthetic. The rhythms are so tight, the call and response so effusive, the improvisations so playful and imaginative, the tones so resonant, the song choices so nobby . . . and she sings! Beautifully, in a strong, clear, emotionally bounteous voice.

A few of the high points:

A really neat arrangement of ?Over the Rainbow?

Recently there’s been a bit of a jazz banjo revival going on; banjo orchestras have been forming and young people are actually lining up to study jazz banjo. But there aren’t a huge number of performers recording with the four-string banjo.

Not to blame them really; the jazz banjo can sound pretty scraggy if it isn’t played just right. But in Cynthia Sayer’s hands the banjo is a jubilant rooster crowing to the rising sun?joyful, consummate, and achingly beautiful.

Attractions manifests four of The Mindful Bard’s criteria for music well worth a listen: 1) it is authentic, original, and delightful; 2) it makes me want to be a better artist; 3) it gives me tools that help my art; and 4) it provides regenerative respite in a cruel world.

Cynthia Sayer was recommended to The Mindful Bard by John Malmström of Bear River, Nova Scotia. 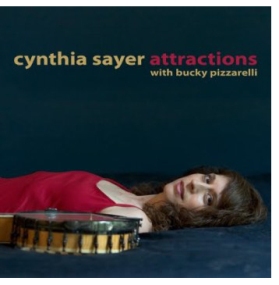