Articles
The Voice
In Conversation With . . . Rita Shelby, Part I

Rita Shelby is a Los Angeles-based jazz singer-songwriter known as much for her wisdom and indomitable spirit as she is for her incredible voice and brilliant songs. She recently released the CD A Date With a Song, for which she wrote melodies and lyrics while Willie Daniels created the musical arrangements. She is also an author and an actress. Rita recently took the time to talk with Wanda Waterman St. Louis about creativity, faith, and boundary setting.

How to Create Amid the Busyness

I’ve got to be able to hear, to be connected, to be able to listen to what is going on amongst the noise and busyness of my life. When I say hear I mean to hear from a spiritual perspective, because for me the link with creativity is the Creator. All creativity stems from the Creator.

Sometimes creativity does come upon you in the middle of the night when the world is silent. You hear the still, small voice and you wake up and get out of bed and grab a pen or turn on the computer to document what it is You’re feeling.

But there have been times when creativity has spoken to me in something else that was going on. There was one time when Willie?my co-composer?and I were in the middle of working on one song and I heard another song. So in my left ear this one thing was happening and in my right ear another melody was tingling. So I said, ?Sorry, Willie! I don’t mean to disturb you, but I’ve got to get this down.?

I grew up in a faith-based household and am very happy to have been introduced to a faith-based way of life. But I did not make the connection between the Creator and creativity until I was writing my first book, which is called Dictation: Plays, Poems, and Monologues for African Americans.

It’s titled as such because some of the writings are specific to our experience as people of colour in America, but the book isn’t void of poems and bits of prose that anyone can relate to, especially one called ?Here’s to the Artist,? and another called ?Feeding the Creative Beast.?

The book was called Dictation because when I write, whether It’s verse, prose, commercial copy, or a song, It’s like taking dictation; I’m writing what I hear. There’s a little speaker plugged into there. The only way that I can explain it is that it is the great spirit of the creator choosing to be expressed through me, in that way, at that time. 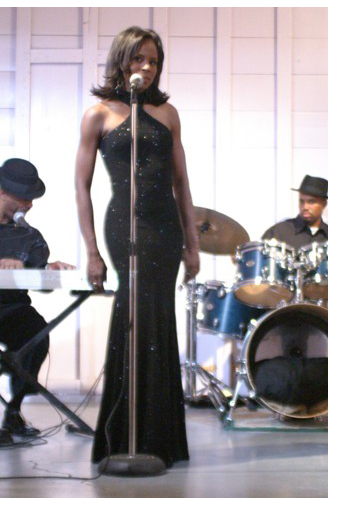 I surround myself with positive people, people who have a positive outlook on life. (I’m talking about your core contingency here; you don’t get to walk around in a bubble!)

You don’t just zap up the spirituality and the positive energy just for yourself but You’re also able to give from a wellspring That’s a lot more balanced and more full.

I have a no drama rule in my personal life. I’m also an actress and I believe that the drama should be saved for the stage. I’m a member of the Screen Actors Guild so if I’ve got drama at home, That’s non-union drama. It’s unpaid, nobody’s getting credit, the audience isn’t there, and You’re not in costume.

I believe in a little saying that my Aunt Mary used to say: Live and let live. I don’t require anyone to change to be around me or to be with me. And if It’s too much of a stretch for someone not to be mutually supportive then I’m usually the one that says, It’s okay, we can coexist; you will get respect and support from me.

I demand it and I don’t settle for less. If conflict ensues because of this demand, they see the back of my head. I will quote another dear, wise woman in my life, my godmother Claudia: That’s the time to vote with your feet. So I vote with my feet.

You recognize that people in general are all on different points of their own development, on an interpersonal level, a spiritual level, a moral level, a political level.

I enjoy watching PBS because they have so many inspirational and informative types of programs. Lately whenever Doctor Daniel Amen has been doing a series on the brain. He understands the brain like I understand chocolate and shoes. In his scans of various people’s brains he showed that there are people walking around with nutritional or chemical imbalances that make them horrible to deal with. You never know what it is that drives someone, what makes him or her click with some people and not click with others.

I’m at a point now that if I’m in disharmony with a set of circumstances, That’s a sign that It’s time for one of us to grow. And if growing independently is most healthy for both of us then I support that.