Features
The Voice
Saturday Night at the (Old) Movies – We Will Remember Them: – World War I Films

During the month of November, we pause to remember the sacrifices of men and women who fought—and still fight—to defend freedom. Yet as time passes, their labours may seem a more distant memory, something out of a history book. This year marks the 95th anniversary of the outbreak of World War I, a conflict so bloody and history changing that people thought it would end all wars. Only three verified World War I veterans remain (1), all over 108 years old, but their experiences need not fade into history.

Films offer us the opportunity to immerse ourselves in an era long gone, to understand what it was really like to fight during the First World War. The anti-war film, the patriotic thriller, and the love story have all drawn inspiration from, and give a human element to, this more-than-just-historical event.

One of the most moving war dramas of all time, All Quiet on the Western Front (1930), follows the fortunes of a group of naïve young German men who eagerly join the army, inspired by the noble idea of fighting and dying for their country. But when they reach the battlefield, the reality of war sets in: death; dirt; hunger; pain; callousness; remorse, and all for a few inches at the front. War changes their young spirits and ages them emotionally, separating them from the young fellows they were before they left. In fact, their life on the front becomes more real than anything home offers, with its lies about the nobility of war. Produced without a musical score—unusual for that day—the film’s background of shell noise and the black and white production give it a stark realism. It’s a tragic film, but a must-see.

Trivia: When the film was released in Germany in the early 1930s, Nazi agitators protested what they considered to be anti-German and anti-war messages in the film by releasing rats and stink bombs in theatres during showings. Later, when they rose to power, the Nazis banned the film outright.

Another tragic story of life at the front is Stanley Kubrick’s first major film, Paths of Glory (1957). Loosely inspired by the early practice of placing men in front of firing squads to set examples, the film pits the idealistic Colonel Dax against the opportunistic Generals Mireau and Broulard. Even by the film’s end, the generals fail to see that their main problem is their treatment of the soldiers as expendable equipment rather than as human beings. The contrast between their attitude and Dax’s more humane treatment of his men is a sad commentary on misguided authoritarianism, something That’s relevant in many more fields than the battleground.

Trivia: The film was shot mostly in Germany, but its battle for the Ant Hill didn’t take place in former trenches. The production team used a farmer’s field, paying rent and compensating the owner for the crops he’d lose that season. They then proceeded to create a battlefield: eight cranes, 60 crew members, and three weeks of almost round-the-clock effort later, they had the authentic scenery.

The French film Grand Illusion (1937) conveys its anti-war message a little differently by avoiding the fighting and instead exploring human relationships among those affected by war. Two Frenchmen are shot down by a German officer, then invited in for dinner. As the prisoners of war interact among one another and with their captors, there’s a growing sense that war has been thrust upon its players, setting up walls where there should be none. German and French aristocrats have more in common with one another than with their “bourgeois” compatriots; yet because of their nationality, they must be enemies. And men on the same side fail to really understand and appreciate their fellow allies, because they have no common background. It’s a thought-provoking film, and its ability to raise deep questions about war without showing a single battle is brilliant. 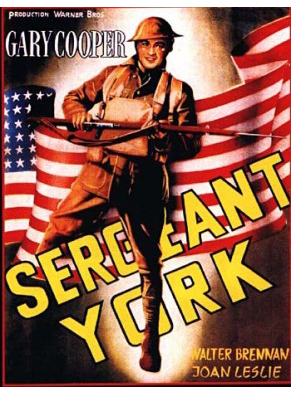 Trivia: Grand Illusion was received well in North America; it was the first foreign-language film to be nominated for an Academy Award for Best Picture. However, the film was almost lost. During World War II, Nazis seized the original negatives and transported them to Germany, where it was believed that they were accidentally destroyed during an Allied raid. It was not until the early 1990s that the film was discovered intact!

If war can inspire fear, confusion, and power-mongering, it can also give rise to courage, patriotism, and heroic actions that suggest that it is possible to rise above evil. While many World War I films deal directly with the wrongs of war, Sergeant York‘s (1941) focus on a few good men is an uplifting and refreshing change. Based on a true story, the film introduces Alvin York, a wild-living farmhand in Tennessee, whose encounter with love, religion, and eventually patriotic pride, lead him to heroics on the battlefield. Although the movie’s climactic charge scene may seem over-the-top, it really happened as played out in the film. If All Quiet on the Western Front, Grand Illusion, and Paths of Glory focus on the oblivion of those “responsible” for the war and the helplessness of those involved in it, Sergeant York shows that people have the capacity to transform themselves, and their situations, for the good.

Trivia: The real Alvin York, on whose diary the film was based, had been approached for years to license the rights of his story to Hollywood. He refused to cheapen his military service, saying that ?This uniform ain’t for sale? (similar to what he says toward the movie’s end). However, with the outbreak of World War II, producers convinced York that his story would inspire American patriotism at a critical time. Allegedly, York insisted that Gary Cooper play him in the film as a condition of allowing the movie to be made.

Amid—and often because of—the hell of war, romance could still bloom. A classic example is 1932’s A Farewell to Arms, based on the Hemingway novel of the same name. When a wartime ambulance driver meets a young nurse, It’s love at first sight, but their passionate romance is overshadowed by the realities of war and duty?and the jealousy of others. Although the novel has a more pessimistic tone, the film version’s focus is on the romantic. What unfolds is a tragic and somewhat melodramatic, but satisfying, tale of undying love.

Trivia: If it seems as though there’s an incredible height difference between the Lieutenant (Gary Cooper) and the Nurse (Helen Hayes), You’re correct: Cooper was 6’2″, while Hayes was just 5 feet. 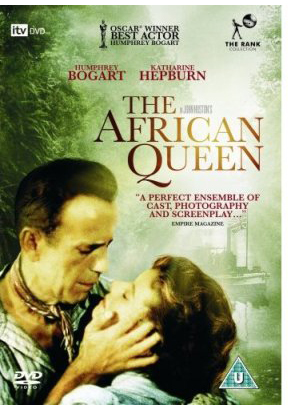 Another WWI-inspired romance, The African Queen (1951), takes place far from the European battlefields, transporting viewers to the jungles of Africa in 1914. Prim British missionary Rose (Katharine Hepburn) lives with her brother in a peaceful native village in German East Africa. When the war starts, German soldiers invade, burn the village, capture the natives, and beat Rose’s brother to death. Rose is soon rescued by the coarse boatman Charlie (Humphrey Bogart), who insists they’ll have to hide in the jungle until the war is over, perhaps for years. Rose has other ideas. Learning that the German ship Louisa is blocking British passage in and out of the area, she concocts a plan: sink it mid-river. What follows is their wild adventure, part Indiana Jones and part Pirates of the Caribbean, as they battle mud, river rapids, leeches, mosquitoes, hippos, German snipers, and even each other, to reach their goal.

Trivia: Most of the movie (except the swimming scenes) was filmed on location in Africa. Hepburn’s whimsical account of the filming (The Making of the African Queen, or How I Went to Africa With Bogart, Bacall and Huston and Almost Lost My Mind (Knopf, 1987)) gives an insider’s view of their adventures filming in a remote locale. It also sheds some light on just what it was like to work with legends like Humphrey Bogart and (director) John Huston.

Although these films run the gamut from tragic and depressing to thought-provoking to inspiring to comical, all have one thing in common. They portray the reality of people in a war that, nearly one hundred years later, still moves us. Better still, they remind us of the sacrifices made over the course of history by those that were willing to fight, and even die, that future generations might be free. Happy—and thoughtful—watching!

(1) Those who joined prior to the Armistice.