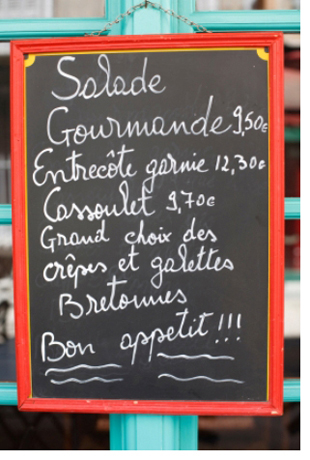 Fluency in both of Canada’s official languages is becoming increasingly more common. The ability to speak French has even become a skill necessary to attain many jobs. How is language-learning experienced at a distance, though? Are AU French classes comparable to those found in ?regular? brick-and-mortar universities?

Dr. Vina Tirven-Gadum, Assistant Professor of French Language and Literature, and Christine Purfield, an AU French student, were kind enough to share their thoughts in this two-part investigation of AU’s French program. This week’s article looks at AU’s current and future French offerings, while next week’s article will examine how the experience of learning a second language by distance compares to that of learning in a classroom setting.

AU’s French department is housed in the Centre for Language and Literature, and ?consists of two full-time faculty members, namely, Dr. Audrey O?Brien, and myself,? says Dr. Tirven-Gadum, ?as well as five talented tutors, who have expertise in the fields of Language training and French Literature.? Students have the option of completing either a University Certificate in French Language Proficiency or a Bachelor of Arts with a concentration, major, or minor in French.

One strength of AU’s French program ?is that we offer very high calibre courses which have been designed by faculty members who are experts in their field,? says Dr. Tirven-Gadum. ?These members have accumulated many years experience teaching French courses both in a traditional classroom setting and at a distance. Our courses offer a good grounding in French grammar, French syntax, French writing skills and in French and Francophone Literature.

?Presently, we are entering a new revitalizing phase in our curriculum offerings. To make our French degree more competitive and more in line with other French programmes offered at other Canadian universities, we are adding more French Literature and culture courses to the programme. To achieve this, [Dr. O?Brien] and I have designed or are in the process of designing many new courses,? Dr. Tirven-Gadum explains.

Dr. Tirven-Gadum recently designed the course French 358: Initiation à la littérature d?expression française I, and is currently working on the continuation of this course, French 359: Initiation à la littérature française II. In French 358, students are given the opportunity to acquire ?a basic knowledge of French texts that have marked French literature and culture from the Middle Ages (Marie de France, Villon) to the 18th century (Voltaire),? as well as to study ?one of the most well-known and enduring French plays: L?Avare by Molière.?

French 358 ?will serve as a stepping stone to explore further French literature courses offered at this university or at other universities . . . Twelve students have already enrolled in the course since July 1, 2009, the opening date, and, so far, the feedback from students has been very positive.?

French 359, meanwhile, ?will consist of excerpts taken from French literary masterpieces from 19th, 20th, and early 21st centuries, as well as the Literature from French Canada (Gabrielle Roy) and Francophone Africa (Senghor), etc.? Dr. Tirven-Gadum hopes that the course will be ?opened for registration by the end of next year.?

Several other senior-level French literature courses are also underway, including French 420 and 422, currently under development by Dr. Tirven-Gadum in conjunction with subject matter experts, and French 474, which is being written by Dr. O?Brien. 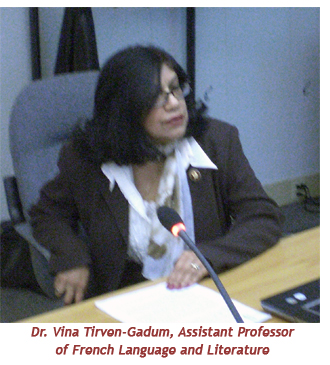 French 420: Poésie et théâtre du 19e siècle français will see students ?study a selection of poetry by French male authors, the poetry by French female authors, a play of the Romantic period and a selection of poetry from Les Fleurs du Mal by the great poet Baudelaire,? says Dr. Tirven-Gadum. ?What is particularly innovative about this course is the inclusion of women poets, most of whom have so far been excluded from courses in 19th-century French literature. These women poets were not only contemporaries to, but indeed close literary associates of, some of the literary giants of 19th-century France.?

French 421: Le Roman du 19e siècle français, will serve as ?an introduction to the 19th-century French novel, through the study of works by Balzac, George Sand and Gustave Flaubert.? Dr. Tirven-Gadum believes that ?what may be innovative and of contemporary appeal? about this course is the inclusion of George Sand, a female French novelist. ?Students need to know of the existence of feminine (perhaps ?feminist?) literature in France nearly a century before the word ?feminism? found a place in the French dictionary,? explains Dr. Tirven-Gadum.

French 474: Le Cinéma francophone, meanwhile, will allow students to explore French Canadian film ?as an expression of a cultural identity.? The course also ?examines the history and evolution of the French film industry in North America. The main emphasis is on the cinema of Québec but reference will also be made to Francophone productions from other areas of Canada’s cultural and socio-political domains.?

One common factor in all of these courses, according to Dr. Tirven-Gadum, is that they ?will be appropriate, indeed ideal, for students intending to major in French.?

One such AU student is Christine Purfield, who originally enrolled in the four-year English program. ?I needed to pick some electives and thought it might be fun to refresh my (very limited) French skills,? says Purfield. ?Then I realized that I enjoyed the French courses as much as the English courses,? and switched to a double major.

?My favourite part is now,? Purfield says. ?I’ve finished the prerequisites . . . and have moved on to the literature courses?with real novels!? She finds these French literature classes enjoyable, yet challenging: It’s not only the most fun part of her program, but also ?the scariest, as I realize that I don’t know as much as I thought I did!? And with the selection of interesting, senior-level French courses constantly increasing, Purfield may soon find it challenging just to choose which classes she’ll enrol in next!

Be sure to check back next week as Purfield and Dr. Tirven-Gadum discuss the strengths and weaknesses of learning French by distance.