Articles
The Voice
Eras in Education – Women in Lab Coats in 1920s Belarus: Revolution in the Classroom 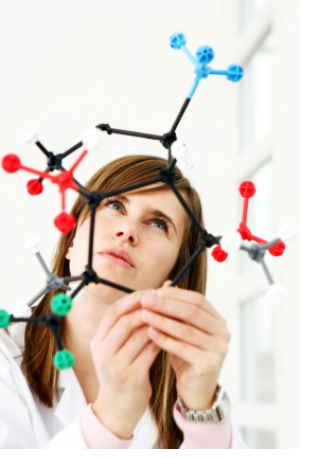 In high school science classes, the moment when we chose lab partners was crucial. It meant deciding whether to pair off with a buddy who may or may not have technical competence with petri dishes, electron microscopes, and Bunsen burners, or to strike out on a perilous journey across the classroom in an attempt to latch on with one of the ?science girls.?

These were an intimidating bunch, bound for future careers as doctors, researchers, teachers, and veterinarians. Their intelligence translated into a certain indifference or aloofness to boys such as me; they didn’t seem interested in us as specimens of inchoate manhood so much as examples of what to not let get in the way of larger life ambitions.

I am exaggerating here, of course. The ?science girls? in my school were infinitely varied in personality and temperament. They were fascinating to talk to. To me what set them apart was that, unlike other students I hung out with, their world did not seem to revolve around personal interrelations and psychological intrigue. They often seemed more content to ponder the periodic table than to analyze the emotional bearings of their friends.

Science itself has historically embodied a division between rational and emotional. Behind the Iron Curtain, deep in the heart of the Soviet bloc, women in the country of Belarus had opportunities following the October 1917 Revolution that their sisters in Canada at the time may never have imagined.

Belarus, also known as White Russia, has a long history as a proud East Slavic nation. As with the comparatively massive state of Russia lying just to the east, Belarus suffered Mongolian invasions between 1240 and 1480 CE. Associated with this were Grand Dukes of Moscow becoming the ?tax collectors? for the Mongols, a reality that led to a deeply parasitic and authoritarian historical political climate. Belarus remained largely feudal until the 19th century, much later than Western Europe. With this history of domination and serfdom as a backdrop, the Russian Revolution swept the egalitarian ideology of Marxism-Leninism into power. Almost overnight, education and gender equality became crucial components of the emergent ?worker’s state.?

Seven hundred years earlier the first rays of Belarus? ?cultural and spiritual dawn? were shone by a 12th-century princess named Efrosinia Polotskaya, who at the age of 12 became a nun and changed her name from Predslava. She went on to found ?the first scriptoria? in convents and churches, which in turn provided textbooks for schools she founded.

In the early 1920s the new Communist state in Belarus played a ?key role? in forming ?social and gender equality making higher education free and available to all sections of the population,? as well as eliminating the gender divide that prevented women from entering certain occupations, especially the sciences.

The revolution of 1917 played the key role in formation of social and gender equality making higher education free and available to all sections of the population and repealing the prohibition against “male” professions, which was reflected in a number of legislative acts. Today Belarus is a land of complete literacy where 28% of population have a higher education, half of which are women.

In 1921, a Belarusian State University was founded, and by the end of the decade an Academy of Sciences came into being. Today 28 per cent of all Belarusians have a higher education, ?half of which are women.? By comparison, 47 per cent of Canadians have ?a postsecondary degree of some kind,? and in America this number is 39 per cent. However, Americans have more four-year university degrees per capita.

In Belarus the granting of physics degrees to women in the 1920s represented a sociologically important gender shift, which suffragettes in post-WWI Canada, the USA, or Britain would have had many debates about. As some writers have observed, physics tends to reflect ?a de-animated, de-sanctified, and increasingly mechanized conception of nature.? Stereotypes of women as sensitive, emotional, intuitive, and flighty all contravene the expectation that women scientists can ?tell the true story.?

The condescending line ?Just the facts, ma?am? comes to mind when it comes to purely scientific empirical observation. Yet despite science’s traditional masculine bias, women graduated from universities in the Belarusian Socialist Republic and made important contributions in ?such fields as laser physics, nonlinear dynamics of laser and optical systems . . . atomic and molecular spectroscopy, biophysics . . . crystal optics, thermo physics, nuclear physics, etc.?

The study of nuclear physics by women in Belarusian schools is particularly interesting in light of feminism’s historical focus on patriarchy’s desire for control and mastery over nature as a corollary of a deep masculine desire to ?thrust into (female) nature’s secrets.? The fact that women were part of the most world-changing physics project of the 20th century, the harnessing of nuclear power for energy and warfare, is important. 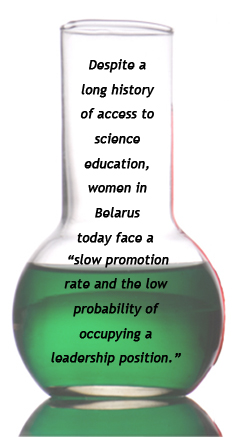 It suggests what feminist theorists Lynda Birke and Marsha Henry speak of when they note the ?social embededness of all knowledge; even ?good? science is still science deeply enmeshed in particular social values.? Feminism points out that access to higher education does not always equal full equality. Barriers may remain, especially when women’s genetic proclivities are believed to make them unable to adopt leadership roles. As noted in Birke and Henry, ?genetics can come in handy for letting institutions off the hook.? Belarusian women often found their areas of research, including those related to the development of nuclear weaponry, directed by male superiors.

Women in science programs face challenges in the 21st century, especially in comparison to women in arts or ?humanitarian? educational pursuits. In a survey of female physicists in Belarus, 82 per cent reported being married and 76 per cent reported having children. Yet despite being in a highly educated professional field they now struggle to juggle childcare and careers.

This reality may be attributable to Mikhail Gorbachev’s late-1980s program of perestroika. Perestroika was a response to the overly bureaucratic nature of the Soviet state apparatus. It involved a deregulation process accompanied by an allowance for greater private ownership of businesses and a reduction in government social and welfare services. In Belarus and other soon-to-be former Soviet states, ?women are among the principal losers in the restructuring process, both through the rise in conservative cultures, and through the economic imperatives of competing in a market-based system.?

Despite a long history of access to science education, women in Belarus today face a ?slow promotion rate and the low probability of occupying a leadership position.? They also tend to experience ?psychological pressure? stemming from occupying a traditionally masculine role. Meanwhile, women in the arts report a higher degree of personal satisfaction.

The fact that traditional gender roles are so slow to change in educational institutions is not a result of their timelessness or implacability. Gender power arises in society from material, political, and cultural power. With a challenge to ideologies that promote inequality comes greater liberation for students who challenge expectations.

Just as in Belarus, where Marxists in power encouraged a change in gender roles, the ?science girls? in my high school classes occupied a social status made possible by their parents? generation’s feminist overthrow of traditional gender roles. These young scientists, now just as 80 years earlier in the far reaches of Eastern Europe, represent manifestations of what the feminist theorist Donna Haraway terms a ?polymorphous information system.? This leads to greater freedom for purposes of self-fulfillment.

It is worth remembering that it was not long ago that home-economics classes were mandatory for girls while shop classes were required for boys. The fact that our schools now promote individuals to choose electives according to preference and taste reflects a process by which we all become part of a freer, more just, society.