Articles
The Voice
In Conversation With . . . Cynthia Sayer, Part I

Cynthia Sayer is a New York-based jazz banjo phenomenon whose latest album, Attractions, on Plunk Records, was recently reviewed in The Voice. She recently took the time to talk with Wanda Waterman St. Louis about her childhood, jazz banjo, and why she decided against a legal career.

My early childhood was in Massachusetts, but we moved to Scotch Plains, New Jersey, when I was in second grade and stayed there, so I consider that to be my hometown.

I had an active childhood, with lots of interests in the arts. My parents were very culturally supportive. They also had their own artistic passions?my father for art and photography, my mother for singing in choral groups.

I played piano, guitar, drums, and viola. I took dance lessons off and on in various forms including ballet, tap, and jazz. I was very involved in art and won an art scholarship as a child. I did a summer musical for kids every year, performed in school plays, and as a teen performed in community theatre.

I also loved writing, and I kept journals. I enjoyed numerous arts, and music didn’t stand out in any way for me. If anything, theatre was probably my main involvement. I remember how odd it was the first time I played in the pit for a show instead of being in it!

I started taking banjo lessons at age 13 from Patty Fischer. At the time I had no idea that it was unusual for a female to play the four-string banjo, so it was quite a coincidence that one of the few around happened to live nearby. She said she could get me started on tenor, plectrum, or five-string banjo, but could take me the furthest on plectrum since that’s what she played. So I promptly chose plectrum.

I liked the sound of the tenor and the plectrum equally for many years. But then over time I came to prefer the tighter chord clusters of the plectrum.

Also, I’m left-handed, but Patty said it would be easier for her to teach me right-handed instead of upside down and backwards, so I agreed to that without much thought as well. 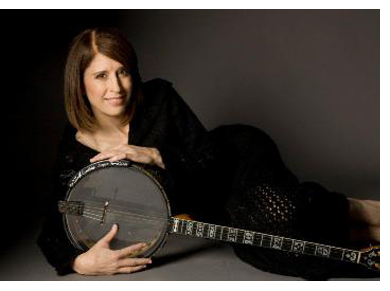 My parents encouraged me to go to law school. Since I did well in school and didn’t know what I wanted to do, it seemed like a good idea. While at college I signed up to take the LSATs (the entrance exams for law school). To my surprise I experienced a huge sense of foreboding the night before that was so profound it made me decide to skip the exams. I assumed I would just try it some other time.

But then I started thinking; I had dreamed of having a life of travel and adventure, of being professionally independent instead of working for someone else. I wondered whether my adverse reaction to the exam was something inside of me asking me to try to fulfill that for a year or two first before becoming a responsible adult by going to law school and getting a proper job.

I had always enjoyed playing gigs during summers and weekends, but it had never occurred to me to become a professional musician. When I tried to think of ways that I could support myself with this lifestyle goal, music was the only thing I could think of that might make it possible.

That’s why I initially became a musician; it was simply a means by which I hoped to experience a fun lifestyle for a while.

I gradually fell in love with the art of it, made a personal connection to jazz, and worked hard to improve. I liked the entrepreneurial aspects of working as a freelancer as well. It took me several years to admit to myself that this was what I wanted to do. I never did take those LSATs.

I wish I could answer that question. I struggle with creativity. Sometimes I seem to just fall into it and am instantly on a roll, and sometimes there is a huge, often painful hurdle to get past before I can get connected. I might be inspired to work after hearing other players who moved me in some way. Also, a sense of peace and time might get me into that creative zone.