Columns
The Voice
The Mindful Bard – New World Coming: The Sixties and the Shaping of Global Consciousness

Book: New World Coming: The Sixties and the Shaping of Global Consciousness

Publisher: Between the Lines

?From Brazil to Vietnam, from the Dominican Republic to Algeria, from Mali to Indonesia, from Bolivia to Greece, US fleets, air force, and intelligence networks were undermining the achievements of the post-war period and arresting the tide of history. The 1960s were indeed America’s decade.?

Insofar as American social activism in the ?60s failed to achieve world peace and justice, it failed for the same reasons that it failed to achieve justice at home. A few of the problems, on both fronts: 1) ignorance of the truly pressing social issues both at home and abroad; 2) self-righteousness; 3) a false sense of heroism; 4) an acquiescence to an end-justifies-the-means mindset; 5) an attachment to a Western, patriarchal model of resistance and activism; and 6) the success with which states guarded their misdemeanours until it was too late to reverse them.

But it took an awful lot of hubris to assume that world peace was dependent on one nation, region, or people. And just as Western youth were demonstrating against Vietnam, racism, and male chauvinism, they were blissfully unaware of how their government was undermining self-determination and liberation the world over, and of how they were to some extent seen as complicit.

This global ?60s brings out some remarkable phenomena. Awakening to new ways of thinking about justice and activism, or simply thinking about these things for the first time, was neither restricted to the West nor was it necessarily inspired by the struggles and enlightenments of Western youth. 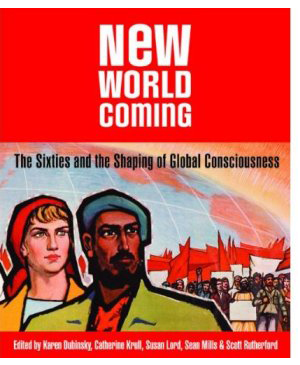 The global stage hosted a set of developments, many of which can be grouped under anti-colonial liberation struggles or movements of transnational, non-proletarian self-determination. These often included or were part of movements to halt environmental destruction or to create social justice for marginalized groups. The historical trajectories demanded changes in the way those involved thought about their place in a world that dictated a tiered (first, second, third world) paradigm based on how ?developed? a nation was perceived to be by industrialized military states.

After reviews of a series of books about the ?60s in America, New World Coming is a humbling read; the cultural revolution in the United States pales by comparison with simultaneous world events and ideological shifts.

This book is based on a series of lectures given at an international conference at Queen’s University in 2007. The conference had the same name, and its purpose was to shift the focus away from the major?and very centralized?events that have almost exclusively dominated ?60s studies from the beginning.

One consensus is clearly that the cultural and historical crescendo and decrescendo of the ?60s (which, let’s be clear, can’t be limited to the events of one decade) was a dramatic transition period, but the question being debated is often this: What were the ?60s a transition from, and to what did they transition?

This book represents a major leap forward and is an indispensable foundation for a social activist’s education. Extremely useful to mindful bards and culture makers is the section ?Cultural Citizenship,? a series of essays on the relationship between art and social activism, showing many examples of mutually inspiring and highly constructive symbioses of creativity and social action.

New World Coming manifests six of The Mindful Bard’s criteria for books well worth reading: 1) it confronts existing injustices; 2) it renews my enthusiasm for positive social action; 3) it gives me tools enabling me to respond with compassion and efficacy to the suffering around me; 4) it displays an engagement with and compassionate response to suffering; 5) it stimulates my mind; 6) it poses and admirably responds to questions which have a direct bearing on my view of existence.