?It would be so easy
You could kill a man
He that took the rest of
All that you had
Just drowning in your river
You think what you could do
You all done feeling sorrow
That’s when the devil talks to you?

If You’re a roots fan, and I know you are, Gordie Tentrees’s third album will bring you many hours of bliss. And don’t just give it one listen?it really does grow on you, transport you, even. These are aimless north country drifter songs, redolent of wood smoke, gasoline, pine needles, moss, beer, and river water, with lyrical substance and thoughtful, joyfully executed musical arrangements. 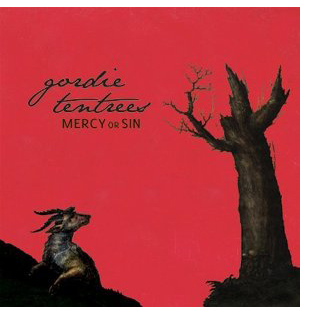 There is a virile energy in blues when It’s done right, a rugged, pared down, carnal essentiality by no means confined to the male sex. It can be tempting to put out too much of it and That’s when it loses its salience to become monotonous, but in this album the virility is part of a spectrum that also includes introspection, tenderness, fun country licks, and rollicking rhythms. The contrast is mutually advantageous.

Tentrees played four instruments on this one; vocals, guitar, dobro, and harmonica. Several members of his band are also multi-instrumentalists; together they have great chemistry and a musical fervour that never seems to lag.

Four particularly engaging songs are ?No Integrity Man,? ?Carpenter Girl,? ?Rambling’s Gonna Be the Death of Me,? and ?Devil Talks.?

In January the Yukon-based performer is beginning a lengthy North American tour of concerts (including an appearance at the Olympic Games), radio appearances, and CD release parties.

Mercy or Sin manifests six of The Mindful Bard’s criteria for music well worth a listen: 1) it is authentic, original, and delightful; 2) it confronts existing injustices; 3) it displays an engagement with and compassionate response to suffering; 4) it inspires an awareness of the sanctity of creation; 5) it is about attainment of the true self; and 6) it provides respite from a sick and cruel world, a respite enabling me to renew myself for a return to mindful endeavour.