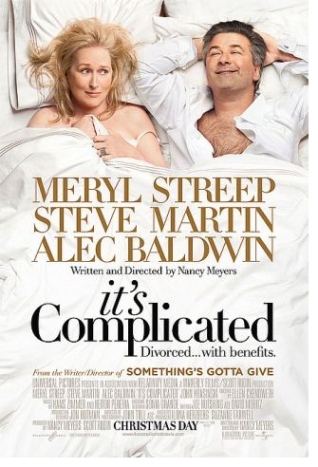 Upon hearing the title, you already know that It’s going to be a film about relationships. But unlike the typical romantic comedy that most people are used to seeing, this one does not feature perky starlets or muscled young hotties. Reflecting North America’s shifting demographics, the film’s love triangle involves 50-something divorcees played by Meryl Streep, Alec Baldwin, and Steve Martin.

Streep, a consummate actor perhaps best known for dramatic roles like Sophie’s Choice and Silkwood, provides a hilarious performance that rivals the talents of her co-stars and veteran comedians Baldwin and Martin. As Jane Adler, she runs a hugely successful bakery/restaurant. With her stylish home and French pastry chef training, She’s something of a defrosted Martha Stewart, having not only more warmth and charm but a better wardrobe and no criminal record.

At the beginning of the film, Jane’s youngest child is leaving home. The empty nest makes the dedicated mother lonely, but as we later realize, it gives her the opportunity to pursue her own wants, including the expansion of her home, which seems rather odd given that her children have all left. If nothing else, it signals that she is open to changes in her life.

Baldwin, also an award-winning actor, best known for his role in the television series 30 Rock, plays Jane’s ex-husband Jake, a selfish and smooth-talking lawyer who can rationalize anything. He left Jane for a younger woman, but realizes?as the saying goes?the grass is not always greener on the other side. One wonders if his infamous real-life parenting and divorce battles helped him to flesh out the Jake Adler character.

While still married to Jane, Jake had an affair with his now second wife Agness (yes, that is how the film’s website spells it), played by Lake Bell. The younger woman seems to have little to offer, apart from a younger body. Unlike Jane she doesn’t cook, and in contrast to Jane’s wonderful parenting she has an out-of-control five-year-old. The rather sullen Agness is portrayed as little more than a sexual object whose only goal is to become pregnant by her greying husband, a regular patient at a local fertility clinic.

Martin, as architect Adam Schafer, is still struggling with his own divorce and still wounded by the revelation of his ex-wife’s affair with his best friend. He helps Jane plan the renovations to her home, and finds himself attracted to her. He has read all 47 emails that she sent to the architectural firm and thoughtfully incorporated her desires into the plans. Ironically, it is Martin, the comic genius, who gets the fewest funny lines. In contrast to the suave and confident Jake, Adam is a quiet and restrained character but Martin is still able to channel the ?wild and crazy guy? of his younger years to great comic effect.

Though not specifically listed in the credits, food and drink play central roles in the film. Wine, in particular, is a ubiquitous presence, perhaps meant to remind us that fine wine and women improve with age. And of course, there are obvious links between food, sensuality, and sexuality. Jane provides for the men’s appetites and even unlocks her bakery late at night, offering Adam anything on the menu or, if he prefers, anything not on the menu. Not known for picking up on hints, even I got that one.

The story takes off when Jane and Jake’s son graduates from college, the pair end up having dinner alone together, consume large volumes of wine, and one thing leads to another. The former spouses become lovers, and Jane becomes her ex-husband’s mistress.

Does Jake find sex with Jane so much better simply because their own children have already left home, relieving him of any parental responsibility, and there is no pressure to make this lover pregnant? No doubt these factors alone provide something of an aphrodisiac.

Jane is not really comfortable in her new role as mistress, at least at first, though Jake seems to believe that an affair with his ex-wife is the ideal situation. He could not be more wrong. It is of course inevitable that the affair will be uncovered, but the awkward arrangement provides many hilarious situations that truly made the audience laugh out loud.

Overall, the film provides a refreshing and positive view of older women. Jane is independent, sexy, and desirable. This is frankly the film’s most endearing aspect, but it does come with a downside.

Jane is not only a successful entrepreneur, a gourmet chef and baker, a wonderful homemaker, and the perfect single parent to her three grown children. She still has enough energy left over to provide her lover with fantastic sex. In short, the film appears to suggest that in order to be attractive, the older woman has to be superhuman. Indeed, one can argue that the superwoman role is the nemesis of women of any age, especially those pursuing careers outside the home while handling the bulk of childrearing and homemaking responsibilities.

After seeing this film, set in sunny and affluent Santa Barbara, I headed back into the arctic temperatures of an Edmonton night and pondered the fantasy that had just played on the screen. It’s Complicated was a very funny film, filled with absurd situations that kept the audience laughing. That it shows an older woman as being desirable and sexual is clearly a good thing. But at the same time it seems to have traded Hollywood’s emphasis on youth for other attributes that are beyond the reach of most women. 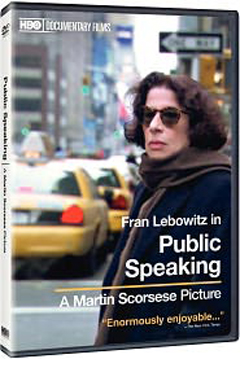